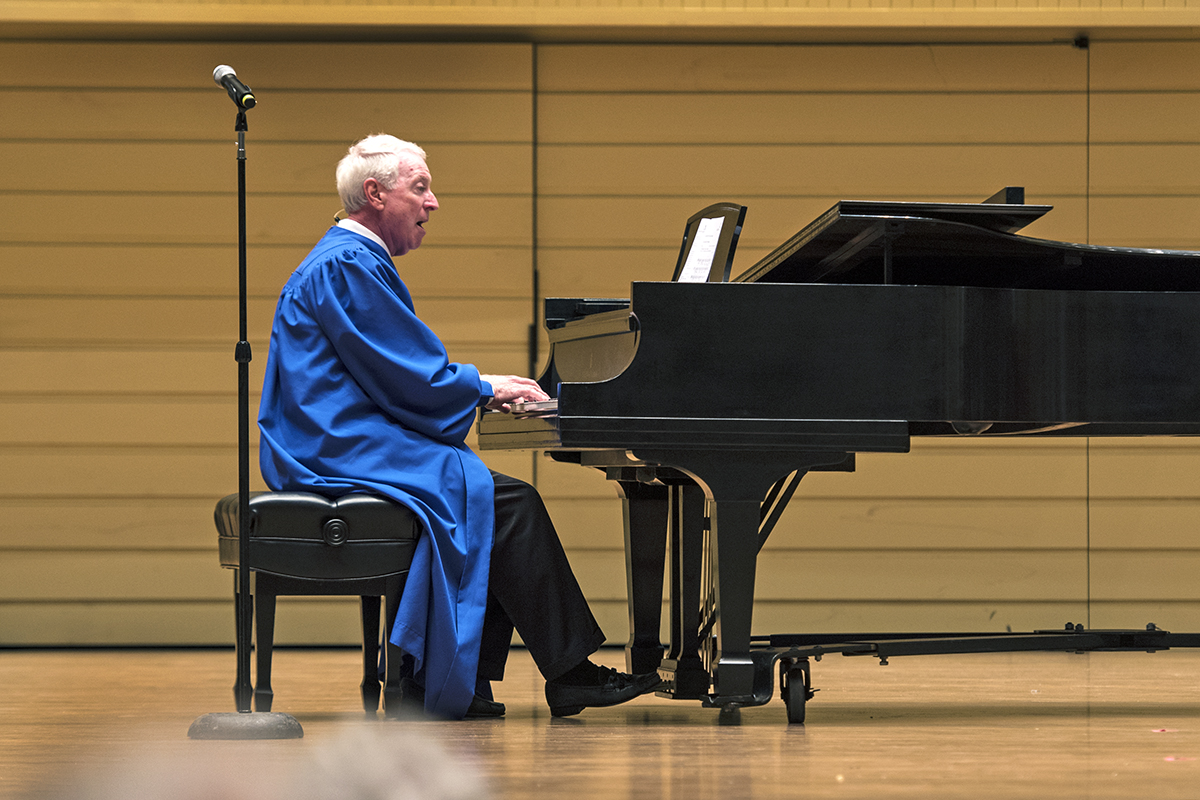 Jared Jacobsen plays the piano on Sunday, August 6, in the Amphitheater. Scared Song service was themed "The Family of Abraham Prays in the Face of Fear and Anxiety." OLIVIA SUN/STAFF PHOTOGRAPHER

At 12:15 p.m. Wednesday in the Amphitheater, Jacobsen, organist and coordinator of worship and sacred music, will use the Massey Memorial Organ to tell six of them. The pieces in the mini-concert all have interesting backstories, Jacobsen said, and he will share them as he goes through the pieces.

One of the pieces, “Pièce Héroïque,” has grand origins in France. César Franck created it for the opening of the Palais du Trocadéro — now called the Palais de Chaillot — a concert hall overlooking the Eiffel Tower. Franck was very shy and sensitive to criticism, though, so he first asked his students what they thought of the piece and they told him to change the ending.

Jacobsen said he prefers the original ending, and plays it that way exclusively. He said he thinks people will be surprised by it because it is a very popular piece normally played with the second ending.

“It’s just different enough at the end for people to say ‘Oh, wow, I’ve never heard that before,’ ” Jacobsen said.

Another piece, “The Great Crush Collision,” Chautauquans have heard before, but not since Jacobsen’s first summer as official organist. Created by Scott Joplin, one of the innovators of ragtime music, the piece tells the story of a flashy stunt put on by two large railway companies in Texas.

In an effort to increase ridership, the two rival companies agreed to fund a massive collision of two of their trains. They built four miles of track, put an engine car at either end, and set them up to go full speed at each other. After the powerful collision, the trains went up into the air. Jacobsen said Joplin captures all of this perfectly in music.

“Afterwards there’s this stunned silence, and you can imagine the pieces of the trains falling back to the earth all over the town,” Jacobsen said.

The final story is more personal for Jacobsen. The piece was created by Stefan Olesten, a man who frequented Jacobsen’s concerts in San Diego, California — where Jacobsen also plays the organ — throughout high school. Jacobsen said he lost touch with Olesten for many years after that, but Olesten approached him at a recent concert in San Diego.

Jacobsen said Olesten told him how he had been to France with his family and had fallen in love with the organs there. As a creative outlet, Olesten writes music for the instrument but doesn’t often share it with others, Jacobsen said. But at that concert, he handed Jacobsen this piece, “In a French Cathedral.

After playing the piece, Jacobsen found Olesten again to tell him he loved it, but didn’t want to play it on the outdoor organ in San Diego, where the sound would escape too quickly to have the proper effect.

“I’m telling you I will play it where I play in the summer,” Jacobsen told Olesten, “because that organ will really do it justice.”