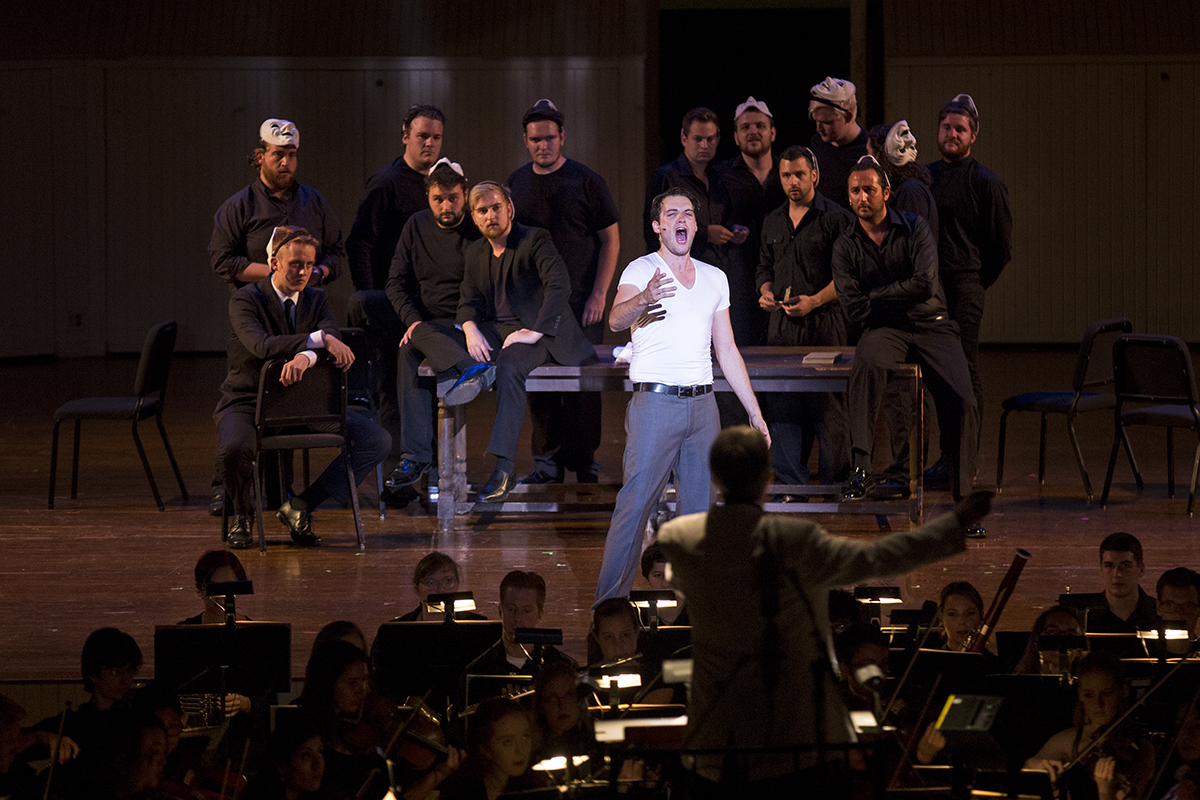 Jean-Michel Richer performs as the Duke in "Rigoletto" on Monday, Aug. 8, in the Amphitheater. MIKE CLARK / DAILY FILE PHOTO

Chautauquans can hear their favorite operas like never before as the Music School Festival Orchestra and Voice Program students join together to perform opera scenes.

At 8:15 p.m. Monday in the Amphitheater, Voice Program Chair Marlena Malas said the audience will hear bits and pieces of the operas they’ve grown to love over the years.

While the varied song selection is an additional perk for the audience, it’s not the main reason Malas chose to do a program of opera scenes this year as opposed to the full-length opera the voice students have performed with the MSFO in the past.

“I wanted everyone, as much as possible, to have the experience of singing in a big space with an orchestra,” Malas said. “(It’s) an educational experience.”

It’s not only a learning experience for the singers. According to MSFO Music Director Timothy Muffitt, the young instrumentalists are learning by performing with their vocalist colleagues. Although the MSFO has been playing in the Amphitheater all season long, this is the first time they will be joined by voice students, which changes the playing experience. Just as the MSFO needed to play differently when they performed with the Chautauqua Festival Dancers in Week Five, the orchestra will have to adjust to accommodate for the vocalists.

Performing with the vocalists helps the instrumentalists in two ways, Muffitt said. Firstly, it offers the students the chance to hone in on the skills needed for accompanying vocalists. But Muffitt said playing with vocalists is not new for most of the musicians in the MSFO. He said that “for players of this high skill level,” the collaboration is not about learning how to play with singers but rather about enhancing their artistic growth.

“The more instrumentalists have the opportunity to work with singers, the more they translate that form of expression into their own instrumental playing,” Muffitt said. “The human voice is the original musical instrument. It’s at the foundation of everything that we do.”

The opera scenes program also exposes the MSFO to composers they might not have otherwise explored.

Performing scenes isn’t the only change to this year’s performance. The new Amphitheater offers its own set of challenges and adjustments to the performance. As opposed to the old Amphitheater, where everyone was on the stage together or the orchestra sat on the raked floor, the new Amp has a pit.

As with any new program, Malas said everyone is feeling a mix of excitement and fear, but the students are “responding to the (challenge) beautifully.” Malas said she’s seen the students develop over the course of the season, both as vocalists and professionals. She said the level of camaraderie among them is remarkable. When the students are not performing in recitals, they often attend them to support their friends and colleagues.

“There’s no judgment in the air,” Malas said. “You can feel the love and support, it’s terrific. It has created a family with these kids. It’s quite wonderful to see.”