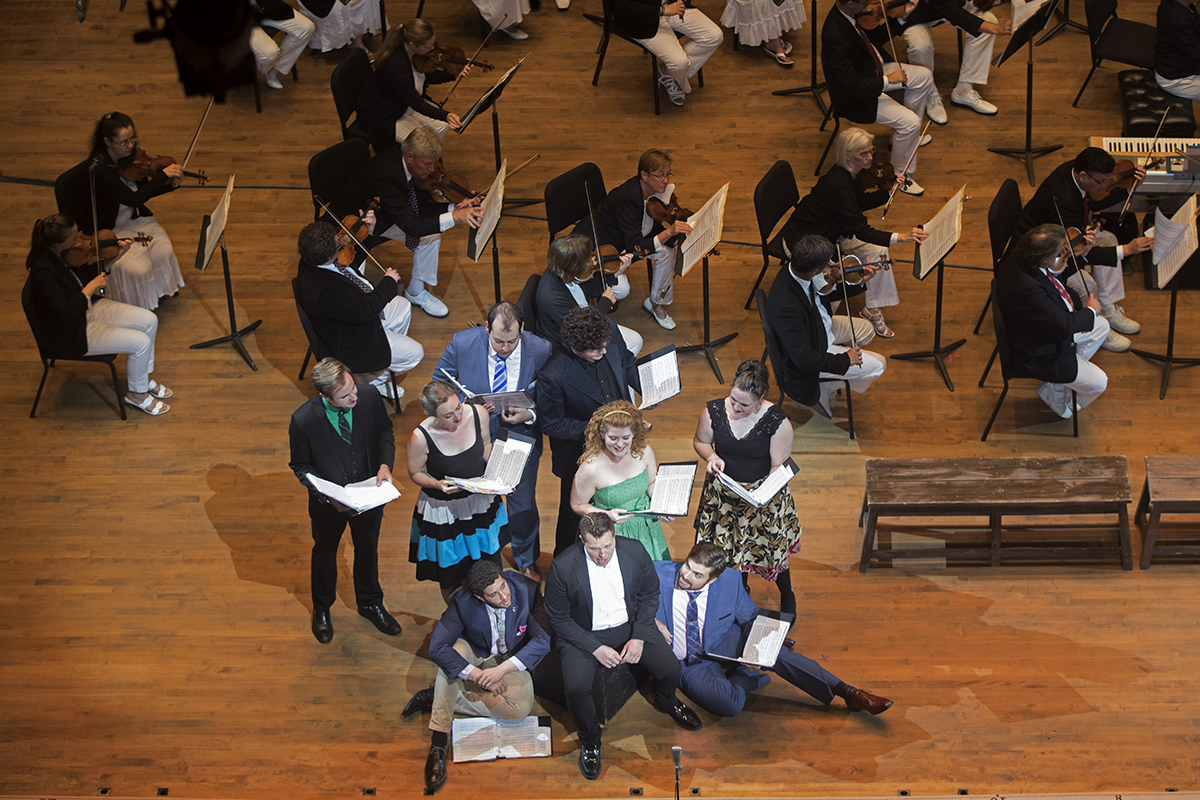 The Chautauqua Symphony Orchestra and the Chautauqua Opera studio artists perform "Lucky to Be Me" from On the Town during the Opera Pops Concert, "Sit Down, You're Rockin' the Benches: Love, Laughter, and Lunacy." on Saturday, August 5, 2017 in the Amphitheater. PAULA OSPINA / STAFF PHOTOGRAPHER

Students learn about more than just music from Curtis Burris, chair of the strings department.

“Talking to Curtis in a lesson is (only) half ‘here’s what you need to do musically’ and good advice on how to play the bass,” said Joe Bauer, a returning bass player in the Music School Festival Orchestra.

The other half is filled with Burris sharing “preposterous stories from his life,” said Bauer, who is studying with Burris for his third summer.

None of those are appropriate to print in the Daily, Bauer said.

Burris was the former principal bass player with the Chautauqua Symphony Orchestra and has been teaching in the School of Music for 30 years. He will be honored at a closed event at 5 p.m. Monday in the Susan Hirt Hagen Center’s Tom and Jane Becker Room.

MSFO Music Director Timothy Muffitt said Burris has been “an incredible asset” to the music program at Chautauqua Institution.

“He has a legendary status in the bass world,” Muffitt said. “Young musicians want to come tap into what he has to offer. For many years he was one of the strongest recruiters we had. We’d get a ridiculous number of applicants.”

Muffitt said there were years where 45 or 50 bass players would apply for the seven positions, which he said speaks to Burris’ national reputation and approach to teaching.

When studying with Burris, Bauer said, students are able to “learn from someone who’s done it all.” He said that Burris has had “any job a bass player could hope for,” and shares his wisdom with his students. In addition to teaching at Chautauqua during the summer, Burris is a professor of bass at the University of Maryland. He joined the National Symphony Orchestra in 1984, and also plays with the American Chamber Players.

Not only is Burris full of knowledge to share with students, he also plays an active role in making sure their time at Chautauqua is fun and interesting. Oliver Dow, School of Music managing director, said that Burris is always turning repertoire on its head and makes the bass an approachable instrument for both the students and the public.

During Bauer’s first summer studying with Burris, he said the six bass players wrote a piece for themselves and a percussionist who played on a chair. He said the piece was essentially a parody, and the group named it “Con-chair-to.” One of the students was a “stick in the mud” and refused to play.

So Burris stepped in.

“(He’s) hilarious,” Bauer said. “He’s great to work with on both fronts, as a teacher and just to talk to as a person.”

At the end of the day, it’s Burris’ personality and dedication that his students and colleagues appreciate. Dow said that the strongest teachers in the School of Music programs are the ones who nurture the students.

“That’s one of the things that (I’ve) always felt about Curtis – he knows his team of students,” Dow said. “It’s all about knowing them as people as well as professional players.”