A moonshot has landed in Chautauqua’s backyard.

At the beginning of Week One, Obi Felten visited the morning lecture platform to discuss the importance of technological innovation in a rapidly changing world.

“Technology of course will not solve all our problems, and there is no doubt that it will create some new ones,” Felten, head of getting moonshots ready for contact with the real world at X, formerly Google X, said during her lecture. “But it is up to us how we use technology to make a better future for ourselves and for generations to come.”

As Felten delivered her June 26 lecture, her team at X was days away from announcing the launch (perhaps “landing” is more apropos) of Dandelion, a home geothermal heating and cooling company. Dandelion’s first market push — made possible by $2 million in funding led by venture capital firm Collaborative Fund — is in New York state.

Dandelion hasn’t reinvented the wheel when it comes to geothermal heating and cooling. Instead, it has innovated an already-existing technology to make the installation of geothermal ground-loop systems more efficient and, hopefully, more cost-effective.

“We decided to try to design a better drill that could reduce the time, mess and hassle of installing these pipes, which could in turn reduce that final cost of a system to homeowners,” Dandelion CEO and co-founder Kathy Hannun wrote on X’s blog at the beginning of July.

The metrics concerning carbon dioxide are especially pertinent. According to a National Oceanic and Atmospheric Administration report published by Al Jazeera, March 2017 was “1.12 degrees Celsius above the long-term average,” making it the second-hottest March on record, behind only March 2016, in a database stretching back to 1880.

As has been identified, a major contributor to this warming trend is the increased presence of greenhouse gas emissions in the atmosphere. Carbon dioxide, according to the Environmental Protection Agency, is the largest contributor to U.S. emissions. Thirty-nine percent of those carbon emissions come from buildings, the U.S. Green Building Council said in a report.

If Hannun and her team at Dandelion can deliver a product that helps alleviate this global environmental issue, they will be serving more than the mission of X.

“I was thinking about how unexpected it would be to my formal, high school self to be running a geothermal company,” Hannun said. “But I was reading a journal entry from high school and was doing a project at the school to make the building more efficient. Maybe it isn’t so surprising after all?”

After finishing high school in her native New Hampshire, Hannun enrolled at Stanford University to study civil engineering. Following graduation in 2009, she spent time in Mexico working on water quality as well as the Philippines engaging in work on hydroelectric power.

“I saw firsthand that, while the mission of these small nonprofit organizations (was something) I really believed in and so did my colleagues, the resource constraint made it so difficult to actually have much of an impact that we wanted to have,” Hannun said. “I knew I had so much to learn and really saw how much I wanted to grow my skill set.”

Google gave her the chance.

Returning to California, she took an entry-level position at the company and soon re-enrolled at Stanford to pursue a master’s degree in theoretical computer science.

While continuing her studies, Hannun moved from her entry-level position (“My job was automated away using a very simple Python script the year after I started it”) to one within the marketing department at what was then called Google X.

Then, in September 2013, she was brought on as the go-to-market manager for Project Loon. Project Loon is a network of balloons that travel at the top edge of the stratosphere to bring internet connectivity to remote areas with unreliable — if any — internet service as well as areas affected by disasters.

“I was there (in New Zealand) with this farmer who was one of our first pilot testers,” Hannun said. “To see it from these scrapped-together prototype tests in the central valley of California to connecting a real person to the internet who didn’t have it before was a really good illustration of what’s possible when you make steady progress day by day, innovating on technology.”

Not long after her experience with Project Loon, Hannun started her own project at X called Foghorn. With Foghorn, Hannun developed technology to harvest carbon dioxide from the ocean. One of the reasons the ocean is becoming more acidic, Hannun said, is because of all the carbon dioxide that is dissolving in it, becoming carbonic acid.

“It’s basically the ocean as a giant sponge that soaks up all this CO2 where our technology wrings out that sponge and collects the CO2,” Hannun said. “Then we can combine it with renewable hydrogen to make fuel.”

The question that Foghorn looked to address was whether it could improve technology enough to bring the process to a point where it made sense to introduce it commercially. Ultimately, because of the relatively low cost of fossil fuels compared with Foghorn’s costs, it made sense to “kill” the project, in X’s terminology.

Hannun approached Felten and Astro Teller, X’s captain of moonshots, and told them it was time to pull the plug on Foghorn. While the commercialization of Foghorn may still be a ways away, the scientific work Hannun and her team did was substantial, so much so that the team plans to publish it in a peer-reviewed journal “so it could be part of the conversation of removing CO2 from the atmosphere.”

When Foghorn first started, Hannun was forced into a period of “re-imagination.” She had never led a project like Foghorn before, or saw herself as a person who should be leading such a project.

“I had this team of people who had much more expertise than me, much more education than me,” Hannun said. “So just to learn the value that I brought and my worthiness to even have the privilege of leading such a group of people that I respected so much, it took time for me to adjust to that new conception of myself.”

But by the time she approached Felten and Teller with the recommendation to kill Foghorn, Hannun had been given not only the space and freedom to develop her abilities, but the support she needed when she needed it as well.

This gave her a confidence that she carried into the development of Dandelion. Hannun said that following Foghorn, she wanted to work on a project that was closer to being “ready for commercialization in the near-term.”

“We realized that if (geothermal) was the way people in cold climates heated and cooled their home(s), then you would essentially electrify heating,” Hannun said. “You could get rid of all these point-source emissions.”

She and her team started by trying to understand why geothermal was the way it was, and then dived into developing technology that addressed what made geothermal so expensive.

This resulted in an innovative process for installing the ground-loops that differentiate ground-sourced heat pumps from other types of heating systems. Hannun said they figured out pretty quickly that if they couldn’t solve the problem of making the installation process easier and more affordable, there was “no chance we’d be able to make geothermal a mainstream option.”

With the possibility of getting a geothermal system into the ground more efficiently, homeowners would be able to utilize a heating and cooling system that Hannun said is 300 to 400 percent more efficient. The heat pump used in a geothermal system doesn’t create heat; it simply transports it from one place to another. In heating mode, the pumps pull heat from the ground and transports it into the house. In cooling mode, it pulls heat from the house and disperses it in the ground.

“All that’s saying is that you’re getting more energy than you’re using because you’re moving it, not creating it,” Hannun said.

In working with local geothermal installers in New York — installers who know their own communities — Hannun and her team at Dandelion are able to continue learning what it takes to serve homeowners and provide them with a product they will want that will also make a difference.

At the end of the day, that’s what Dandelion’s innovation is all about.

“The environment in which you live affects the food you eat, the disease that spreads, the weather, obviously,” Hannun said. “Having it change so perceptively in a human lifetime is crazy (and) really alarming.” 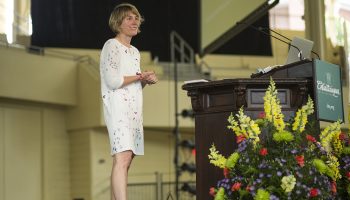 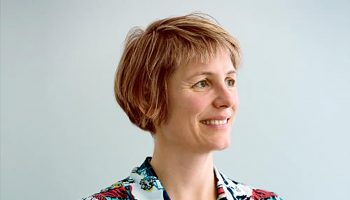