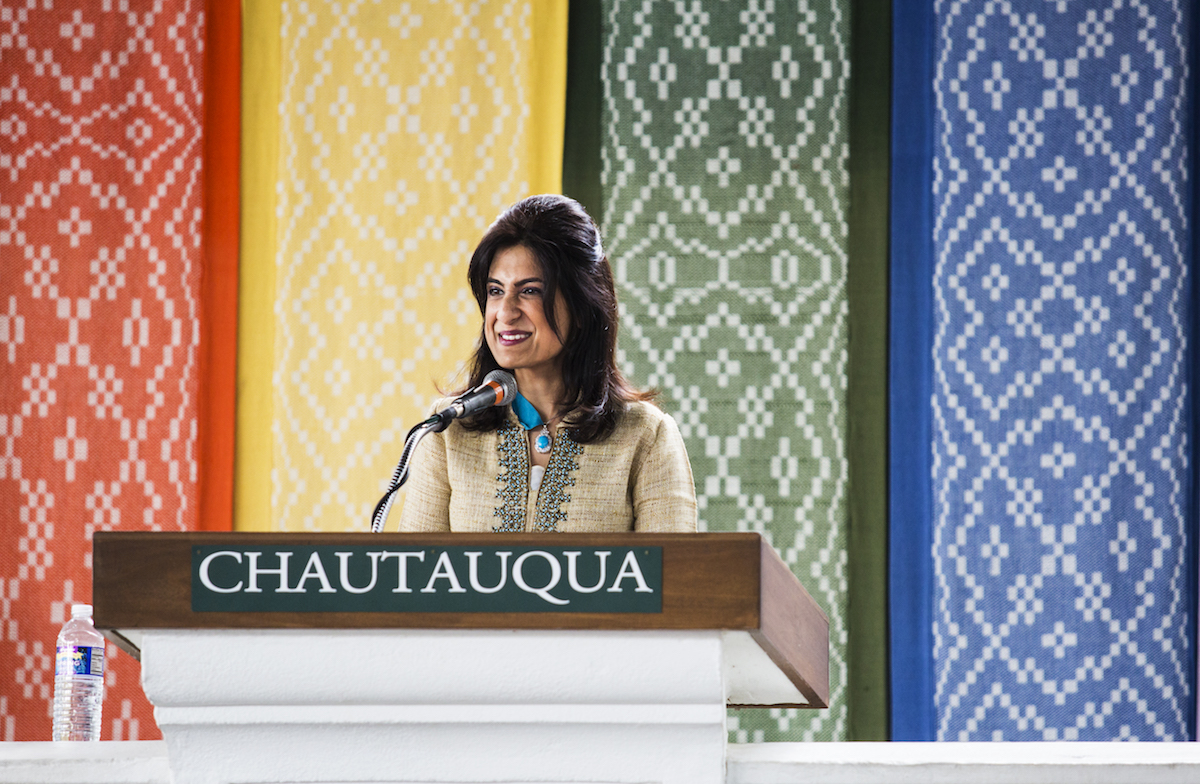 Zahra Jamal, associate director of the Boniuk Institute for Religious Tolerance at Rice University, delivers her lecture “Food for the Soul: A Muslim Perspective" Wednesday, Aug. 23, 2017 in the Hall of Philosophy.

Zahra Jamal is used to being in front of the Hall of Philosophy podium. On Wednesday, she experienced her first time behind it.

She began her inaugural lecture with a joke — on Judgment Day, a diverse group of people is standing at the big, pearly gates of heaven. The Lord first asks the group to divide themselves into two smaller groups: those who have fed the hungry and acknowledged the bounty of God at meal time, and those who have not.

Shortly after, he asks them to form two groups again, this time with different guidelines: those who wear the pants, and those who do not. The women congregate to the “pants” group and the men to the other, but one man stands out in the group of women. When God asks what he is doing there, the man answers, “My wife told me to stand here.” God immediately grants the man access to heaven.

“Across multiple faiths and philosophies, you do find common ethics — gratitude for our daily bread, generosity and compassion for the weak, humility when sustenance is abundant and faith when it is not,” and the universality of laughter at her joke across different backgrounds, Jamal said.

But Islam differs from other faiths, particularly in its followers’ relationship to food, though the religion is much more than not eating pork or drinking beer, Jamal said. She pointed to the Islamic Declaration on Global Climate Change, instituted by the Islamic Foundation for Ecology and Environmental Sciences in August 2015.

“The Islamic declaration called for a green economy, including food security, the rapid phaseout of fossil fuels, the dramatic reduction of greenhouse gas emissions by 2050 and a 100 percent renewable energy strategy,” Jamal said. “The leaders asked: ‘What will future generations say of us, who leave them a degraded planet as our legacy? How will we face our Lord and Creator?’ ”

By the end of her lecture, Jamal hoped to impart at least five Muslim perspectives on food.

“Collectively, these themes illuminate that Islam’s food practices are deeply spiritual, environmental and moral acts that enable the subordination of the ego, the cultivation of communal life and identity, and one’s connection to creator and to creation,” Jamal said.

When describing the holiday of Nawruz, Jamal touched on Haft-Seen, a tabletop that depicts seven symbolically significant foods — wheat, dried olives, sweet pudding, garlic, apple, sumac berries and vinegar — that “represent spiritual re-commitment and gratitude for the rebirth of vegetation.”

Whereas Nawruz is defined by the abundance of food, Ramadan is defined by the lack thereof. During the Muslim holiday, followers of Islam are encouraged to fast from sunrise to sunset. This practice was said to be communicated directly from the angel Gabriel to the Prophet Muhammad.

Hajj is the most physically demanding of the three. The celebration is said to be a symbol of the pilgrimage to Mecca; participants reenact the “physical and spiritual journey undertaken by Abraham and Imam.” The celebration includes a distribution of meat among family, neighbors and the poor, as dividing lines fade during this time.

“Like many transformative rituals, Nawruz, Ramadan and the Hajj are simultaneously congregational and personal, binding the ummah in a spiritual family, nourished by God,” Jamal said.

During the Umayyad dynasty in Spain, the country experienced starvation. Muslim farmers traveled to create aqueducts and deep ravines and improve the pre-existing Roman irrigation system. Water, especially in this time period, was seen as a precious gift from God.

Moorish scholars valued water as well, and considered education an important Islamic ethic; as a result, women, the lower class and non-Muslims were given the opportunity to attend free schools and more than 70 public libraries. Things only went up from there.

“From the eighth to the 15th centuries, the Moors globalized their practices of ecological balance, environmentalism and agricultural advances, by a transcontinental trade and travel, taking food production, consumption and commodification for the benefit of all peoples to the next level,” Jamal said.

One notable source of these benefits? Coffee. Fifteenth-century Muslims often drank this “java juice” to gain improved concentration in prayer; however, those averse to the caffeinated beverage saw it as a “dangerous drug.” Fast forward to 17th-century Turkey, when religious leaders on street corners said coffee would inspire “indecent behavior,” and the Sultan called drinking the stimulant punishable by death.

An article by the Food and Agricultural Organization of the United Nations written in May 2015 cited approximately 795 million people in the world as being “food insecure.”

The Edhi Foundation is looking to lower this number. The organization supports the poor in food pantries, schools, hospitals and orphanages, providing free food for thousands in various types of conflict.

Other Muslim organizations have also started numerous food banks, soup kitchens and homeless shelters. They are needed now more than ever, Jamal said.

Since 2009, the foundation has seen a significant increase in its clientele every year. The founder, Abdul Sattar Edhi, is known as the “angel of mercy” in Pakistan, having adopted 20,000 orphans in his lifetime, alongside raising $100,000 for groceries and shelter for victims of the Ethiopian famine, lasting roughly from 1983 to 1985.

Jamal then introduced another inspirational figure — social entrepreneur Muhammad Yunus. In 2006, he was awarded the Nobel Peace Prize for the Grameen Bank, a Bangladeshi community development bank focused on making small loans to impoverished people without collateral.

Similar organizations include Freedom from Hunger, whose mission is for women to train other women in gaining food security for the impoverished. Since 2015, the food security rate for women and children in Rajasthan, India, has increased from 21 to 53 percent.

“Prophet Muhammad showed compassion for the ill and the hungry, regardless of their character or creed,” Jamal said.

This principle was seen in the Islamic “good Samaritan story,” in which a family practicing Ramadan is about to eat their first meal after sunset when a beggar asks them for food. They give him all they have. The second and third nights bring a starving orphan and a newly released prisoner looking for food, respectively. They give both everything.

On the third night of their fasting, God was said to reveal this Quranic verse to the family: “They feed out of love for God: the needy, the orphan and the prisoner,” Jamal said, quoting the Quran. “They say, we feed you only for the sake of God. We desire from you neither reward nor thanks.”

Prayer and stewardship as food for the body and the soul

Loving the “other” without reward or thanks can be seen in Los Angeles County’s Mohamed Bzeek, a man who has adopted more than 40 terminally ill children while raising a biological child with special needs as well.

“From a Quranic perspective, the purpose of life is to return to the divine origin and to leave the world improved,” Jamal said. “The world around us, that which is delimited by time and space … is believed to be a gift of God. It is a bridge to and a preparation for the life to come.”

It is God, therefore, who has assigned us roles as “his agents and inheritors of the earth,” testing us with the knowledge of the gifts he has given us. Jamal said our ultimate worth is dependent on our response to “divine factors, such as the body, the mind, the soul, time, knowledge and material wealth.”

“The moral of the Sufi’s story is that we become something when we become nothing,” Jamal said. “When we eliminate our ego, we can experience enlightenment. You and I become one; I and you become one.”

Jamal described the crossroads of food and faith as a “deeply spiritual, moral and socially just set of practices that sustain the body and the soul, diminish the ego and create community.” Specifically, through prayer and stewardship, a Muslim can touch the “essence of the creator and creation” and make the world a better place.

“From Prophet Muhammad and Imam Ali to the Moors and the coffee-crazed mystics, from Hajj pilgrims to Eid celebrants, from Muhammad Yunus and Abdul Edhi to the Aga Khan, we find people of faith inspired to strive for social justice,” she said. “In Islam, the acquisition of food, wealth and other resources is to benefit all of creation, not just the individual soul who possesses them. The question motivating the social conscience of Islam is not only ‘What have I achieved?,’ but ‘What have I helped others to achieve?’ ”

So, in closing, she offered a quote from the Sunni Muslim poet Rumi: “You and I should live as if you and I had never heard of a you and an I.”