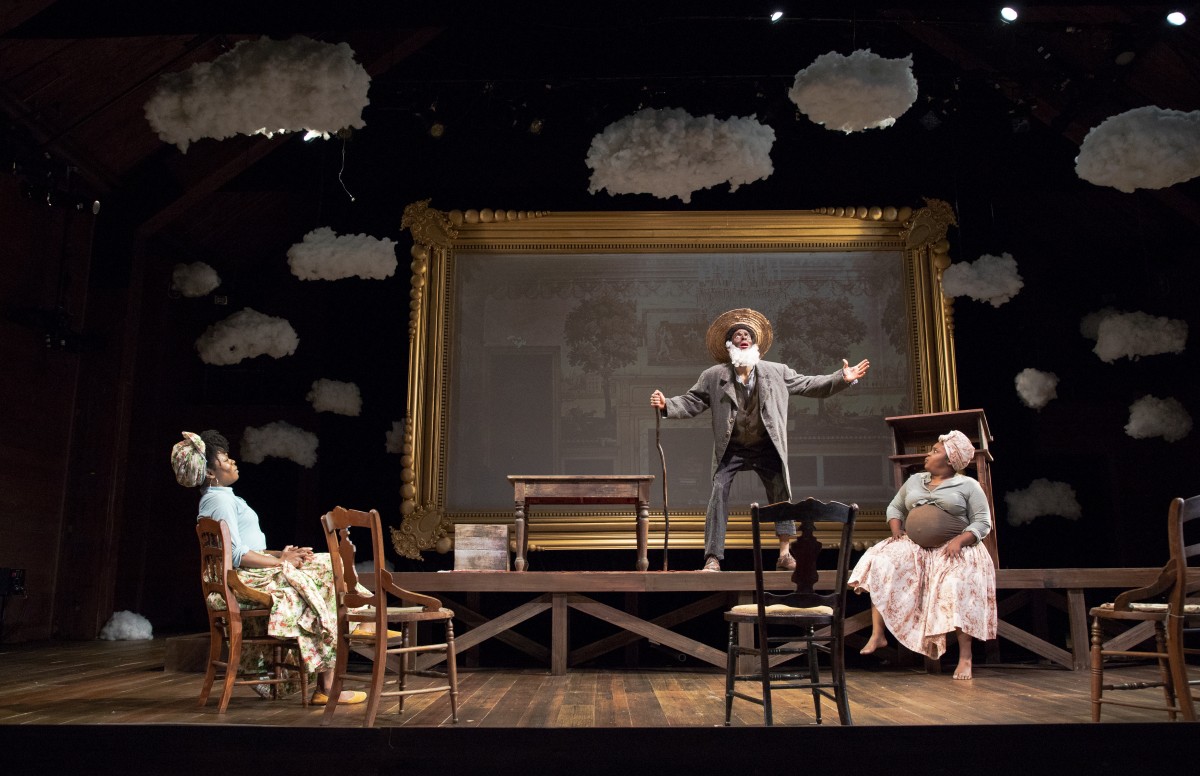 Theatergoers looking for a comfortable evening of entertainment will find no such thing this week in Bratton Theater. The puffy clouds of cotton that hang above the set for An Octoroon evoke an idyllic Southern sky, but director Giovanna Sardelli hopes the stage-business below will show Chautauqua that the way America addresses race relations was and is far from perfect.

The first production of Chautauqua Theater Company’s 2018 season, Branden Jacobs-Jenkins’ An Octoroon opens this weekend at 8 p.m. Friday, June 29, in Bratton Theater and runs through July 8. The play balances comedy with Brechtian discomfort and is not recommended for children due to strong language and content.

Sardelli said she appreciates that An Octoroon directly addresses a racist past and present in the United States that is often willfully ignored, but does so in a way that pokes fun of the country’s failures.

The octoroon in question is the beautiful Zoe, played by Hannah Rose Caton. Born to an enslaved woman of color and a white plantation owner, Zoe’s mixed-race status causes her to be rejected by both white and black society, despite being raised as a lady by her loving father.

“She is pulled from every direction and I think she comes to a realization just how unhappy she’s been,” Caton said.

Zoe finds herself in jeopardy when her father dies and the plantation is put up for auction. Because she is one-eighth black, she is therefore subject to be sold with the estate alongside several slaves.

The plot and dialogue of Jacobs-Jenkins’ play is heavily based on Dion Boucicault’s 1859 melodrama, The Octoroon, which was in turn based on Thomas Mayne’s 1856 novel, The Quadroon. The Octoroon had a long and successful run at the Winter Garden Theatre in New York City in spite of its controversial, “anti-slavery” views.

An Octoroon also proved critically popular, winning an Obie Award in 2014 for Best New American Play. In his review for The New York Times, Ben Brantley said An Octoroon “may turn out to be this decade’s most eloquent theatrical statement on race in America today.”

Although considered progressive for its time, Boucicault’s original play traffics dangerous caricatures that haunt people of color to this day. One way Jacobs-Jenkins’ draws attention to the absurdity of these tropes is through An Octoroon’s ironic use of whiteface, blackface and redface.

When deciding what shows to include in the 2018 CTC season, Artistic Director Andrew Borba said he chose An Octoroon specifically to line up with the theme of Chautauqua’s second week: “American Identity.” Borba said the play does not attempt to end racism, but instead ruminates on why and how it persists.

“I think that if we are all willing to embrace the many difficulties surrounding race in America today and our history of difficulties with race in America, we know that there is not a single pat answer,” Borba said. “This play, theatrical, thematically and imaginatively, not only investigates, but explodes those questions and I believe it’s a masterpiece.”

Borba said the play’s complexity may encourage some audience members to return to Bratton for a second viewing.

“One won’t walk away with a complete understanding, but I think the same is true of a Beethoven symphony,” he said. “You can listen to something and appreciate it from the first listen and then hear it again and understand it at a slightly deeper level.”

There will be a talkback following every performance to allow audience members to ask questions and process what they see on stage.

Powell was in the audience for one of the play’s first workshops and said he is friends with many members of the original cast. As a fellow playwright, Powell said he admires Jacobs-Jenkins’ refusal to give up on the project, stepping into the roles himself after the original director and two white actors quit. A version of this story is retold in An Octoroon’s prologue.

“I feel like I’m sharing with this community a piece of a very, very wise and vibrant, smart, passionate community in America, which is the black arts community,” Powell said.

CTC conservatory actor Keshav Moodliar also plays multiple roles in An Octoroon and said the play’s dissection of racial intolerance is not limited to slavery. In the play’s third act, a mother begs on the auction block not to be separated from her children. Moodliar said that scene reminds him of the current immigration controversy.

“It is impossible for you to see that and not think about and see all the images you see in the media with these kids,” Moodliar said in reference to the detainment camps on the U.S.-Mexican border. “I was just watching a boy who was brought back with his mother after months and, yeah, it certainly ties in today more than ever.”

Sardelli said that the relevancy of An Octoroon, while unfortunate, comes with an opportunity for audiences to practice empathy.

“We have a wonderful opportunity in our country right now to talk about how we treat somebody we deem to be different than ourselves… we can actually have the conversation we’ve needed to have and commence some tremendous healing,” Sardelli said. “I want everyone to walk out inspired to participate in that conversation and with better tools.”