Before coming to Chautauqua, Amber Scoon said she was “ready to drop out of college.” 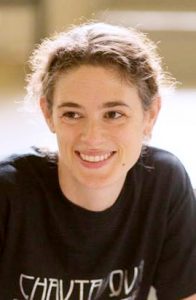 But artist and philosopher Scoon, who will speak as part of the Visual Arts Lecture Series at 7 p.m. Friday, June 29  in the Hultquist Center, changed her mind after first coming to the Institution as a student in 1999.

“Chautauqua really changed my life because I hadn’t been exposed to many artists, and I didn’t entirely have an understanding of what it meant to be an artist,” Scoon said. “When I came to Chautauqua, I met so many passionate artists — also musicians and writers and thinkers — coming together for creative making and creative thought. It really ignited my entire career.”

At her lecture, Scoon will discuss her recent project “The Shed,” which “deals with violence, loss and terror and how we resist,” she said.

Scoon will also discuss the relationship between thinking, writing and making.

Scoon returned to Chautauqua’s School of Art as an instructor in 2007 and continued teaching there for the next 10 summers. She has also published multiple books and has another one slated for release in 2019.

Scoon cited artist Glenn Goldberg as her “most influential teacher,” and said in addition to the art of discipline, he taught her that “art doesn’t just strike you in the middle of the night. … You work at it every day for your whole life consistently and as routine.”

? consists of conversations between the two artists, which they began recording as they started to consider publishing a book together. Given its ambiguous title and philosophical content, Goldberg said it’s “probably going to wreck a bit of havoc in terms of where they would file it.”

Goldberg, along with Visual Arts at Chautauqua Institution Artistic Director Don Kimes, helped Scoon in what she called the “macho, tough and competitive” art world she entered in the 1990s — a far cry from the age of #MeToo.

“These two people were people who focused on my art,” Scoon said of Goldberg and Kimes. “It wasn’t about who I was or who I knew or what I looked like. They were totally respectful and focused on art.”

Although Scoon said the environment professional artists currently work in has changed since the 1990s, change is not happening quickly.

“I’ve been talking about it ever since I was 20 years old in New York City, and I don’t think people have really been listening,” Scoon said. “But I do feel like young people today are listening and paying attention, and they want change.”

Scoon’s students, in particular, she said, are cognizant of the art world’s need for more diversity. As for those who haven’t been listening, she wishes they, too, could recognize the importance of diversity and inclusivity.

“I wish they knew that diverse experience, diverse stories, diverse humans … that sort of diversity isn’t secondary to art,” Scoon said. “It is the core of art. It is the thing that allows people to be creative. We have to have differences between us in order to understand possibilities, in order to see past our own experiences and to see past what we already think we know.”