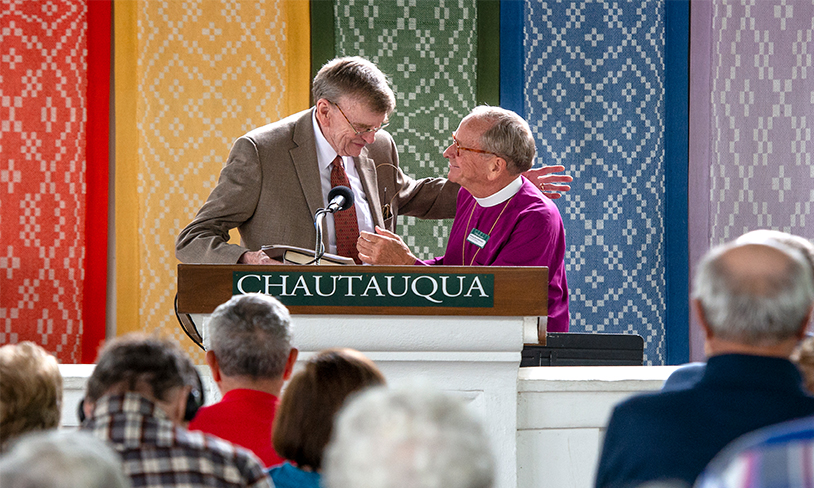 Introducing John Shelby Spong the Rt. Rev. V. Gene Robinson was able to publicly thank the man he said “are the shoulders on which (Robinson) stands.”

Robinson, who is the first openly gay priest to be elected bishop in Christendom, attributes the opportunity he had to serve as a leader in the church to Spong, who he said supported LGBT rights before it was popular.

“It is because of that early work that he did and all of the work that built on it that lets me wear a purple shirt today,” said Robinson, who currently serves as Chautauqua’s vice president of religion and senior pastor. “There is no one who has been braver and ready to take whatever came his way for saving the truth.”

At 2 p.m. on Thursday, June 28, in the Hall of Philosophy, Spong, retired Episcopal bishop of Newark, discussed Matthew, his mantra and his legacy during his last lecture of the week and his career, titled “Universalism: The Future of Christianity and Why I Remain a Christian,” for Week One’s interfaith theme, “Producing a Living Faith Today?”

But before he talked too much about the end, he went back to the Jewish roots of Matthew’s Gospel.

According to Spong, when Matthew said to “go and make disciples of all nations,” he placed words in the mouth of the risen Jesus.

Matthew was not alone in his understanding of Jesus’ message. When the Gospel of Luke was being written, the Holy Spirit fell upon the disciples of Jesus and all the world. The author made sure that it was understood as a universal happening, Spong said.

Then there was Paul. Paul tried to explain to the Galatians what it meant to “put on Christ” in the verse that reads, “For as many of you as were baptized into Christ have put on Christ.”

“Christ must be served in every person,” he said. “There is no longer Jew nor Greek. There is no longer male nor female. That is what Jesus meant and that’s what the original Christ experience was, before we became Scripture defenders, and before the creeds became the essence of our faith.”

While Paul left off there, Spong believes there is a lot more to modernizing Christianity than erasing those dividing lines.

“When charting a new reformation, we must engage in a task of getting even deeper into the vision of universalism,” he said. “It has not only to do with erasing human divisions, but about revitalizing our most cherished beliefs.”

For the reformation to work, Spong said creeds can no longer be used to bring Christians together.

“The Christianity of the future cannot live inside the doctrines of the past,” Spong said. “Doctrines are never a description or definition of our God experience. My experience is my ability to perceive God, but the nature of God is beyond my ability to describe.”

The same thing is true of Christianity’s fundamental doctrine, known as “the Incarnation.”

“That doctrine makes Jesus not unlike the comic strip character Clark Kent who turned out to be Superman in the skies,” he said. “We must move beyond the now irrelevant dualistic patterns and discover the holy at the heart of the human. Incarnation will never give us that.”

With the need for constant evolution in mind, Spong created his personal mantra.

“My mantra is intended only to be my statement at this time, of where I am today (and) the place of which I have arrived on what might be the last days of my journey,” he said. “I want to say something positively, something about the conclusion that I presently hold and bear witness to why I continue to be a member of this community.”

He began by admitting he still has no way of knowing “who” or “what” God is.

“No one can do that,” Spong said. “Why don’t we understand that? That is not within the capacity of the human mind to embrace the nature of God.”

Next, was his belief that God is a source of life.

“As far as we know, a creature who can: define life, contemplates its beginning, anticipates its termination and raise the question of its meaning, is a rare thing,” he said. “So if God is a source of life, then the only way I can appropriately worship God is by living fully.”

God is also a source of love, Spong said.

“If God is a source of love, then the only way I can worship God is by loving, loving wastefully,” he said. “I mean the kind of love that never stops to calculate, never stops to wonder whether the object of its love is worthy to its recipient. It is love that loves not because it has been earned. That’s where I think God is made visible.”

After love, he shared his beliefs about experiencing God.

However, there was one last thing he wanted to add.

Although he has been a Christian his entire life, he does not believe it makes him superior to anyone. It is simply a fact of his upbringing, along with a personal desire to continue being a disciple of Jesus.

In the way Jesus, whether being praised with flattery or diminished by the threat of death, remained unchanged, Spong was moved to affirm his faith. In the way that God brought “oneness out of diversity, wholeness out of brokenness and eternity out of time,” Spong realized the version of faith he wanted to spread.

Spong said the only way his mission can be successful is if his mantra is carried out without any set of boundaries.

“Even in the widest variety of our humanity, in our deepest set of beliefs, there is no outcast in this community,” he said. “There can be no one regarded as unclean, no prejudice allowed to operate inside this vision of Christianity.”

Since then, he has answered the call to try to transform the world so that every person living in it will have a better opportunity to “live fully, love wastefully and be all each of them was created to be.”

Now, that job belongs to everyone in the Christian faith who wishes to carry out his vision to fruition.

And to that, Spong said, “Good luck.”