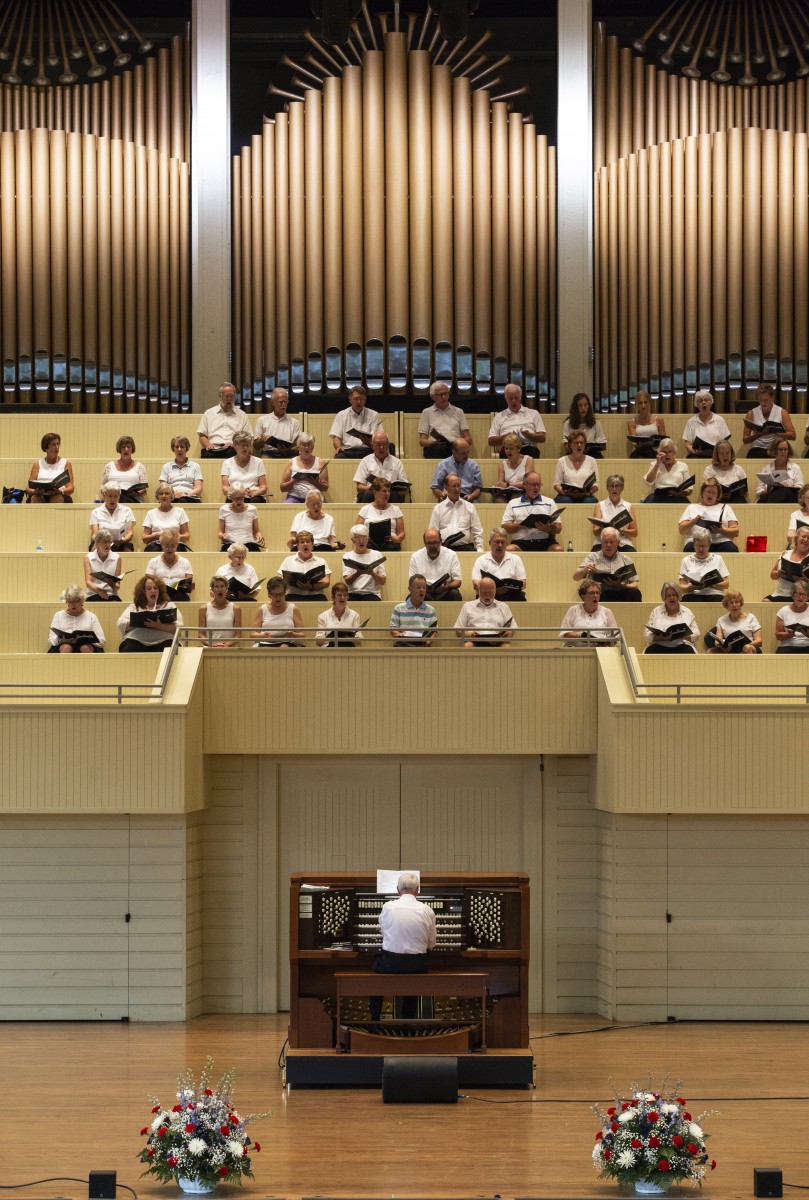 After a warm and humid week full of Independence Day celebrations, Jared Jacobsen has shifted his focus to an entirely different holiday: Christmas.

“There’s something enchanting about singing about snow when it’s 95 degrees outside,” said Jacobsen, the Institution’s organist and coordinator of worship and sacred music.

At 8 p.m. Sunday, July 8 in the Amphitheater, Jacobsen will present “Faces in a Stable: Christmas in July” for Week Three’s Sacred Song Service. Celebrating Christmas, he said, is a vital part of summer in Chautauqua that unites the congregation through joyful song.

With so many Christmas favorites, Jacobsen has the task of selecting the right carols for this summertime service, songs that make Chautauquans nostalgic for hot cocoa and sugar cookies.

“Great music has been written about every aspect of the Christmas story, so it’s hard to pick and choose,” he said. “It’s helpful for me to come up with a theme.”

This year, Jacobsen was inspired by a Latin Christmas chant called “O Magnum Mysterium,” meaning “O Great Mystery.” The mystery, Jacobsen said, is reflected in the faces behind Christmas, from the very first eyes to fall upon baby Jesus to all of those who celebrate the holiday.

With each piece, he will add a new face to the manger scene. The set begins with Mary and ultimately recognizes all of those, past and present, who have shared in the celebration of this sacred birth.

“It starts with this little gathering, this rag-tag bunch of people gathering in the most humble place you can possibly imagine,” he said. “And then I will take it out of the charming story in the stable and connect it with all the rest of the world who is told this story for 2,000 years.”

Jacobsen’s approach, he admits, is not glamorous. The set of music, written by composer Morten Lauridsen in 1994, was not written to be flashy. Rather, it “crystallized this whole idea of the simplicity of the stable.”

“It’s not about the King and the fanfare and being born in the best hospital in town,” he said. “These are refugees, seeking someplace to lay their head. There’s no room anywhere, so they’re in a stable. It’s out of the most humble beginnings.”

By emphasizing Jesus’ humble beginning, Jacobsen hopes the audience will recognize the true magic of Christmas, a magic that he has felt in his own life. After his nephew was born, he said a special moment transpired that demonstrated the power of innocence and new life.

“When that baby was born and we were all standing in the hospital, staring through the window. It was like a magical thing, it was a new beginning,” Jacobsen said. “Just instantly, everything kind of melted away, all the turmoil and the frustration. That’s the magic of the baby, that’s the magic of Christmas.”