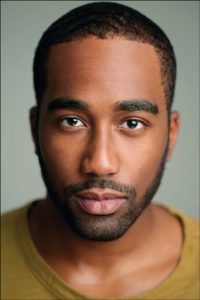 At the top of the summer, he performed in the Young Playwrights Project and will later act in Untitled Russia Play for the New Play Workshop. Fabre can also be seen as Orlando in CTC’s traveling production of As You Like It. Fabre said that his Orlando is an adventurous man who loves his family and just wants his portion of his inheritance.

“He’s very passionate,” Fabre said. “He is just trying to figure out how to love, and I love that about him.”

Where he’s from: Fabre grew up in Baldwin, New York, and is currently enrolled in the Brown/Trinity Rep. MFA program in Providence, Rhode Island. After dabbling in theater at St. John’s University, Fabre moved to New York City, finding his tribe at The Flea Theater. At the same time, he worked at the Apple Store in SoHo, which occasionally hosted performers like Meryl Streep on its in-store stage.

Fabre said the job was great because it gave him benefits and allowed him to move around the country for work. In four years, Fabre lived in three cities.

“In the fifth year, they give you a plaque saying you made it,” Fabre said. “I didn’t want the plaque because it meant that I deferred my dream a little too long.”

While he’s glad to have moved on, Fabre said he misses the employee discount on Apple products.

First theatrical memory: When he was 10 years old, Fabre saw Cats on Broadway and was impressed by how the animals moved into the aisles.

“I didn’t know you could use the space like that,” he said.

Proudest theatrical moment: As an acting apprentice at Portland Playhouse, Fabre wrote and performed his first solo show, called Good Kid Mad City. Set on a train in New York City, the play was about Fabre’s experience as a young, Creole-speaking, Haitian-American wanting to be an artist.

“My family is filled with people in the medical field, and we’ve got some lawyers in the family. The arts are a bit different from the path they typically wanted me to venture on to,” Fabre said. “It was a culmination of those experiences.”

What he’s reading: He is re-reading James Baldwin’s The Fire Next Time.

What he’s watching: He watches a lot of SportsCenter on ESPN. His favorite basketball team is the New York Knicks, and he also roots for the San Francisco Giants.

What’s next: After Chautauqua, Fabre will return to Trinity Repertory Company and play Cassius in Julius Caesar before performing in Black Odyssey.