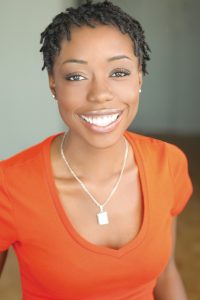 Who: Janet Fiki, CTC conservatory actor. This weekend, she can be seen on stage as Dido in An Octoroon, and she will return to Bratton Theater’s stage later this summer to play Ida in Into the Breeches!

Where she’s from: Fiki is from the Poconos, Pennsylvania, but currently studies across the country at University of California San Diego. In the fall,
she will enter her third year of grad school.

First theatrical memory: In the eighth grade, Fiki tried out for a play and said the gossip was that she aced her audition, but was not cast because rehearsal conflicted with the basketball season.

“(Basketball) is very theatrical in a way,” Fiki said. “There’s like a court, there are fans, the audience. It’s kind of a bit of a show.”

Although not the tallest player on the court, Fiki said she perfected her behind-the-back pass and continued playing basketball through college.

Fiki said she did not pursue acting again until her sophomore year at the University of Pittsburgh when she performed in The Vagina Monologues. In time, Fiki said she realized she wanted to be on the stage instead of on the basketball court.

“I just wanted to express another part of myself,” she said. “I think I knew it was always acting because as a kid I would always walk around and do monologues essentially.”

Proudest theatrical moment: After finishing her undergraduate degree, Fiki moved to New York City and gave acting a go. Due to a bad experience with a show, she said she stayed away from theater for a while, doing commercial and television work instead.

Fiki said it wasn’t until a scene class before grad school that she figured out what the stage was really about. She said she had an out-of-body experience where she actually felt that she was in the restaurant, smelling the food as another woman, completely oblivious to the real world.

“I just remember for the first time finding what I like to call ‘the switch.’ For me, that’s what I always chase,” Fiki said. “I’ve found that a couple of times, but when you find it completely, it is the reason that I act.”

What she’s watching: At the recommendation of a castmate, Fiki watched “Everything, Everything” and said she cried a lot.

Dream superpower: Fiki said she wishes she could sprinkle joy and love on herself and others.

Why Chautauqua: When Chautauqua visited UCSD last winter, Fiki said she had originally planned to travel this summer instead of doing theater.

“The way that I fuel myself or inspire is to travel,” Fiki said. “It doesn’t even have to be something artsy, it could be just meeting new people or experiences.”

Having heard great things about CTC, Fiki auditioned anyway. She later realized she did not want to spend her summer traveling, after the death of a family member.

“It shifted a lot within me, Fiki said. “Ironically, at the same time I got the offer to come to Chautauqua, I was like, ‘Oh, this is kind of perfect’ because I realized that I wanted some structure.”