Conservation, physical well-being and the chance to embrace nature are just three things that Chautauqua Rails to Trails brings together. The organization is part of a national entity that has supported the development of rail-trails since 1986.

Chautauqua Rails to Trails, a nonprofit organization, offers a wide variety of events throughout the year to raise money to help maintain and improve the trail system, including a partnered trail walk with Chautauqua trail groups on the third Saturday of every other month. Rails-to-Trails is hosting a Wine Walk at 5 p.m. Friday, July 20, featuring wines from five local wineries.

The Wine Walk will take place on the Nadine and Paul Webb Nature Trail, beginning behind Boxcar Barney’s and ending near Chautauqua Lake in Mayville. The Wine Walk will feature six wine stations, live music and trail snacks.

Micaela Young, event coordinator for Chautauqua Rails to Trails, said this event offers the chance for people to experience the trail who might not normally do so.

“It’ll be a great time to do something fun while being active walking on the trail,” Young said.

Young said she got involved with the program while growing up in Sherman, New York.

“The trail goes right behind my house, so it’s something I’ve been using my whole life,” Young said. “I think it’s just something that’s important that people realize they have available to them.”

In addition to working with Rails to Trails, Young has also been involved with the Institution since she was 14, working in the kitchen at Bellinger Hall. She currently works as a head counselor in Bellinger and said the Institution is an important part of her life now.

Young said another reason for having the Wine Walk begin at a central point within the trail system was to provide access for people in and around the Institution during the summer.

“People that are here at the Institution are the kind of people that would be interested in our program,” Young said. “We want them to know about our trails and have (the trails) be part of their summer.”

Bree Agett, vice president of Chautauqua Rails to Trails, has a background in public health dealing with the way the places people live influence their health. She said a wide selection of outdoor venues provide opportunities for the public to improve mental and physical health, while aiding in disease prevention overall.

“The more places we have to be active, the more chances there are that we’re going to partake in physical activity,” Agett said. “(The trails have) created more spaces for people to be physically active and connect with nature in Chautauqua County.”

Agett first became involved with the organization around nine years ago. The focus in the past, Agett said, was on acquiring property and developing land. Recently, the emphasis has shifted more toward maintaining the trails.

Chautauqua Rails to Trails’ system runs from Sherman north toward Brocton and features a variety of woodlands, wetlands and meadows along the way. Different wildlife species can be spotted on the trails year-round. One of the advantages of these trail systems, Agett said, is the wide accessibility for people of all ages.

Tickets for the Wine Walk are $20 if purchased before the event, $25 at the trail and $10 for designated drivers. There are staggered start times for the walk between 5 and 6:30 p.m. 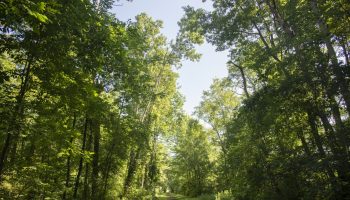