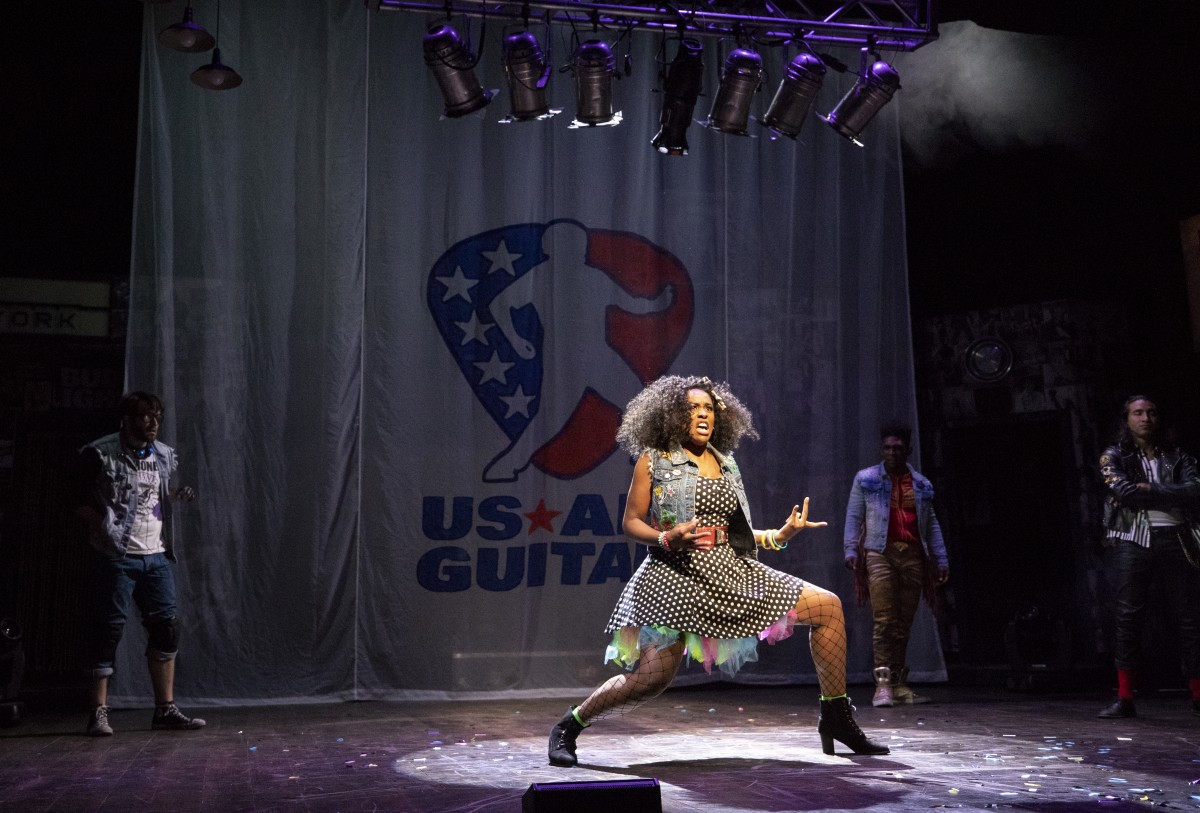 On the competitive circuit, it can take months for air guitarists to select the perfect song and hone a new rockstar routine. Without any prior experience with the art form, Chautauqua Theater Company conservatory actors had mere weeks to become experts of the imaginary instrument.

On the first day of rehearsal, Burns showed video clips of air guitar routines in order to teach the actors how to position their fingers to look like they were playing the real instrument, as well as how to be as expressive as possible on stage.

“I sat in the back of the room with a laser pointer and was like, ‘Notice the left eyebrow on that schpiddledeedeep that he did. Nailed it. It was awesome,’ ” Burns said. “That’s what the first few rehearsals were about — just getting comfortable, being vulnerable and being silly on stage in front of people.”

Tender, who does not have a background in air guitar, said Burns’ expertise was vital to the actors’ success.

In order to make the choreography more comfortable and collaborative, Burns and Tender charged the actors to bring in a few moves they wanted to include in their routines. Conservatory actor Octavia Chavez-Richmond said that her character, the edgy and technically proficient “Cannibal Queen,” borrows a move from air guitarist “Mean Melin,” in which she impales herself with her imaginary instrument. Additionally, some of her hand movements were inspired by Airistotle himself.

Chavez-Richmond can play the real guitar, but she said this skill was actually a hindrance, and that she was better served by her background in ballet, salsa and hip-hop dancing.

“I find dancing is actually a better complement to learning air guitar because it’s exaggerated movement, as opposed to finding the right note,” she said.

Each character in Airness embodies one of the six pillars of air guitar. As “Facebender,” conservatory actor David Rosenberg said his routine relies on facial expressions over ashy moves in order to connect with the crowd and represent “feeling.”

“He’s not going to do anything that’s technically going to blow your mind, or he’s not going to do backbends or anything like that,” Rosenberg said. “I get a couple good windmills in there, but some people do crazy stuff, and mine is more about the storytelling.”

When creating the routine for “Golden Thunder,” Tender said that conservatory actor Elijah Jones wanted to incorporate iconic poses like “Hands up, don’t shoot” into his Michael Jackson medley.

“We allowed (Jones) to be in the room and be himself and talk through things that were important to him and things that we wanted to bring recognition to for an audience who may not always pay attention to it,” Tender said. “To go back in history that way was something new for both of us because most of the time as an African-American in America, you start out from the mark of slavery and then you progress forward. … To be able to reflect back on our past and to see how far we’ve come, it then allowed us to add the element of survival to the entire piece.”

The collaboration did not end in the rehearsal room. Tender said that sound designer Miles Polaski and lighting designer Scott Bolman also weighed in on how to improve the choreography.

“Miles, when he saw the pieces on the set, he came up with new ideas for how to accent certain moments or how to make the audience be more drawn into the performance in a way that can complement the sound, as well as the choreography that has already been established,” she said. “It was really cool through the tech process of this to sit back and listen to everyone’s ideas and find a way to meld them all together for the sake of mak- ing sure the actor is highlighted at their best.”

Although many of the actors’ moves were blocked, Tender said she sprinkled moments into each routine for the actors to improvise.

Although conservatory actor Jake Ryan Lozano is an experienced dancer, he said he was initially anxious about learning his air guitar solos for “D Vicious.” He said the support and generosity from Tender and Burns gave him the confidence to rock out.

“The spirit of what they taught me continues to teach me each night,” Lozano said. “I’m seeing it in the other performers as well. People are getting more comfortable with themselves, with the music and sculpting the space in that way, and it’s interesting to see people glow up a little bit with their work in their routines.”