Discussing the intersection of religion and politics is hardly a lighthearted conversation, historian Spencer McBride admits. But analyzing this connection is vital to understanding American identity. 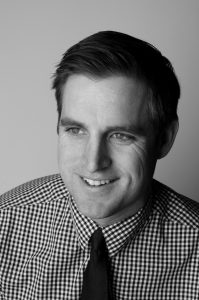 At 2 p.m. on Wednesday, July 4 in the Hall of Philosophy, McBride will confront this topic head-on in his lecture “Religious Awakenings and America’s National Identity Crisis” as part of Week Two’s interfaith theme, “Religion and American Identity.”

“People want very clear answers, they want the role of religion in America’s past to be very neat and clean and to sit in a box,” McBride said. “The reality is that it was just as complicated back then as it is now. It’s really enlightening in some ways just because it shows that this has been a messy, contentious issue from our country’s beginning.”

McBride, a documentary editor at The Joseph Smith Papers, believes America’s “identity crisis” is a constant within the culture that cannot be understood without considering the role of religion. During his lecture, he will take Chautauquans through the sweeping history of the Second Great Awakening, a revival that led to a rapid rise in religious participation by Americans.

As a historian specializing in the American Revolution and the early American republic, McBride attests to religion’s prominent role in shaping the country’s identity. Religious beliefs, he said, have often vindicated social change.

“These religious revivals really drummed up a lot of support for the abolition of slavery. … Yet there’s people using the same Bible, the same religious views to argue that slavery is justified and approved by God,” he said. “So when I talk about a national identity crisis, it’s in a sense that there’s never been a steam-rolled, uncontested national identity. It’s always evolving, it’s always up for debate.”

Amid studying 19th-century movements like the Second Great Awakening and the abolition of slavery, McBride has experienced his own “awakening” as his research has uncovered patterns of religion colliding with politics.

“The first two decades in the 2000s have been very divided, polarized times in our political culture,” he said. “You hear religion invoked again and again by politicians on either side of the aisle, … and people debated the proper role of religion and religious leaders then just as they do now.”

On his very first visit to Chautauqua, the historian and author of Pulpit and Nation: Clergymen and the Politics of Revolutionary America,” said he is enthused about sharing his research with the community.

“I’ve known about Chautauqua for a long time, but it’s great to be a part of it,” he said.