In May 2017, the U.S. Department of Justice appointed former Acting Deputy Attorney General Robert Mueller III as the special counsel overseeing the investigation into ties between President Donald Trump’s campaign and Russian officials. 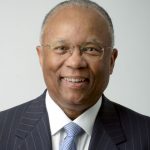 As it happens, Larry D. Thompson succeeded Mueller as deputy attorney general in 2001 and was followed by James Comey in 2003. Although both Comey and Mueller also served as directors of the FBI, Thompson’s career took a different path.

“I’m in the 44th year of law practice,” Thompson said. “I’ve been a federal prosecutor three times, a corporate defense lawyer and a public company general counsel. So that’s given me a wide expanse of legal and policy issues.”

At 9:15 a.m. Thursday, July 5 at Chautauqua Women’s Club, Thompson will respond to the question, “How Do You Judge the Effectiveness of a Special Counsel Investigation?” He said that he wants this Chautauqua Speaks session to take the form of a chat rather than a speech.

“How do we determine success?” Thompson said. “And what do we, as citizens, need to do about our justice system to protect it and make sure the special counsel proceeds in the right way?”

Currently, Thompson is counsel to the Atlanta-based law firm of Finch McCranie. He is also the independent corporate compliance monitor and auditor for the Volkswagen AG emissions proceedings, and a member of the Chautauqua Institution Board of Trustees.

About the same time that Mueller initiated the Russia investigation, Thompson began his three-year appointment overseeing the implementation of the reforms that are part of VW’s criminal plea agreement for selling vehicles with software intentionally designed to evade U.S. emissions tests.

“I had a couple of people call me about potential monitorships, but I declined to pursue them,” Thompson said. “Then I got a call from someone I knew. … He asked if I’d (assume) the two positions for VW because it’s a huge, iconic company for Germany and the world.”

He accepted, and that began a series of successful interviews with the company, the Department of Justice and the presiding judge on the case.

When Thompson was growing up along the Mississippi River in Hannibal, Missouri, in the 1950s and early ’60s, he did not dream about becoming a lawyer. He majored in sociology and minored in history at Culver-Stockton College, the first coeducational institution west of the Mississippi. It was founded by the Disciples of Christ, the denomination of Thompson’s church in Hannibal.

“I remember at the end of one of my history classes, my professor asked to talk to me,” Thompson said. “He said, ‘I understand you’re applying to social work schools; have you ever considered being a lawyer?’ I had not, but from that point on, I adjusted my classes for law.”

He took accounting, logic, English literature and economics, each of which, he said, he thought important to law.

Prior to pursuing his juris doctor degree at the University of Michigan, however, Thompson earned a masters in sociology with a focus on industrial sociology at Michigan State University, then worked at Ford Motor Company as an industrial labor relations representative.

“I was in a three-sided, no-door plastic cubicle and dealt with issues on the assembly line,” Thompson said. “It gave me the incentive to go to law school.”

Given his education and work experience, Thompson originally wanted to become a labor lawyer. After working for a year at Monsanto Company in St. Louis, however, he decided that was not what he wanted to do.

He was then hired by King & Spalding in Atlanta and assigned to criminal cases.

He also took on pro bono cases as a public defender, and early on got involved in politics.

“A lot of people say politics is the mother’s milk of the lawyer,” Thompson said. “I don’t view politics as demeaning.”

Thompson said that when he was 36, U.S. Associate Attorney General Rudy Giuliani signed off on his appointment as U.S. attorney for the Northern District of Georgia — spanning nearly 50 counties — despite his not having prior prosecutorial experience.

While serving in this position from 1982 to 1986, Thompson directed the Southern Organized Crime Drug Enforcement Task Force and was a member of the attorney general’s Economic Crime Council. He then rejoined King & Spalding as a partner and practiced for 16 years as a white- collar defense attorney.

In July 1995, the U.S. Supreme Court-appointed special panel of U.S. Circuit Court Judges appointed Thompson as the independent counsel for the Department of Housing and Urban Development investigation of former HUD Secretary Samuel Pierce and former Secretary of the Interior James Watt.

The U.S. Congress selected him to chair the Judicial Review Commission on Foreign Asset Control in April 2000.

“I had perhaps the most gut-wrenching experience in my career and life,” Thompson said. “That was an unbelievable experience, and it left an indelible impression on me. And it was one of the most satisfying experiences from the perspective of professional service to my country.”

Following the 9/11 attacks, the Department of Justice shifted its focus from drugs to terrorism. In March 2002, Thompson led the department’s efforts to create the National Security Coordination Council to seamlessly coordinate DOJ’s national security and terrorism functions.

“There was no playbook. DOJ had to change overnight its terrorist activities from after-the-fact to prevention,” he said. “What do you do when 19 people are willing to die for their cause?”

Thompson’s discussion at the CWC House will be moderated by Steven J. Brown. Brown was the U.S. Federal Aviation Administration’s associate administrator for air traffic services during the 9/11 attacks. On Aug. 26, 2016, Brown spoke about this experience in the Hall of Philosophy.

In his role as deputy attorney general, Thompson also oversaw the Justice Department’s Enron and WorldCom investigations after the president appointed him to lead the government-wide Corporate Fraud Task Force. In 2004, he came to Chautauqua for the first time to speak about this experience in the Amphitheater.

Thompson has since held a number of positions at PepsiCo, most recently as executive vice president, general counsel and corporate secretary. He retired in 2014 and rejoined Finch McCranie.

“The people who come to Chautauqua are smart, and many are educators in our country,” Thompson said. “At the top of many minds is special prosecutor Bob Mueller. I can talk about prosecution based on my background and one of my legal heroes, Justice (Robert) Jackson.”