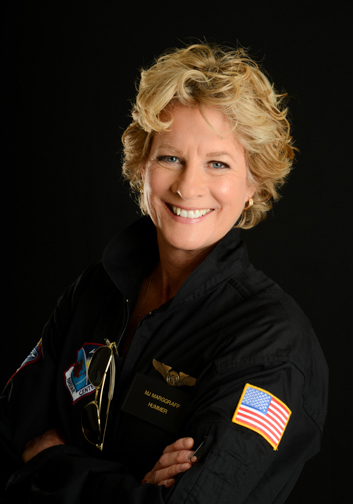 For many, midlife is synonymous with crisis, and crises are to be avoided or prepared for with trepidation.

For others, midlife represents a significant turning point. It’s a reminder that lifespans aren’t infinite and that there may be no time like the present to figure out what they should do with their lives if they don’t already know.

Nearly 15 years ago, when Mary Jo – M.J. –Marggraff was 45, she began chasing her childhood dreams and rocketing them into outer space in ways she could never have conceived of when she was young.

“I’ve done some really fun, cool stuff,” Marggraff said. “When I went down to Hollywood (for the Hallmark morning show) and I took my Uber to the gate, I just thought, ‘OMG, how did I get here?’ ”

Now a pilot and project leader of experiments on the International Space Station, Marggraff will fill everyone in at 2 p.m. Saturday, July 21, in the Hall of Philosophy during the Contemporary Issues Forum when she gives a talk with the same title as her book, “Finding the Wow: How Dreams Take Flight at Midlife.”

Marggraff said that when she was a child, she left all of her cousins behind and moved with her family from Maryland to California, where she lived a middle-class suburban life. What she didn’t leave behind were her dreams.

“My room was filled with stars and planets and aircrafts,” Marggraff said. “This was the heart of a young child, but it didn’t intersect with the heart of my parents.”

Nobody in her family was the least bit comfortable with air flight. She said that her parents believed that if a person was smart, they took a train. The couple of times she flew as a child, she reveled in walking up and down the aisles, taking individually- wrapped soap as souvenirs and talking to the airline attendants (“stewardesses”) and the pilots.

Marggraff said her face was glued to the television screen as CBS news anchor Walter Cronkite covered the extraordinary Apollo 11 spaceflight live. On July 21, 1969 – exactly 49 years before her talk for the Chautauqua Women’s Club – she watched as astronauts Neil Armstrong (mission commander) and Buzz Aldrin (pilot) became the first people to walk on the moon.

Other challenges she confronted were that she “didn’t know a female pilot,” and that during her undergraduate years at the University of California, Santa Barbara — where she majored in developmental psychology — she couldn’t afford flying lessons.

“I hung around with the scientists, facilitating their ideas,” Marggraff said. “I think that’s where my creativity came out.”

Intrigued by the business aspect of the educational world, she earned a master of science in education at Indiana University Bloomington in 1980.

With her unique background, Marggraff landed a job working for the University of California, in her “L.L. Bean look,” to “reimagine the UC campus at Santa Cruz.”

“UC, Santa Cruz was a very new campus,” she said. “It was out of step with where the traditional campus wanted to go. It was the hippie generation but with students with environmental and tech interests.”

Marggraff said that the dean of admissions was a great marketer.

“He said to his team, ‘Here’s what we need to do to get to this number (of students).’ He had everyone get up to speak,” Marggraff said. “He told me to get my hand out of my pocket. He shaped us up and had us help faculty learn how to be versatile. UCSC was strong in tech and the humanities.”

After a few years, Marggraff said she went “over the hill” to Cupertino to work for six years as a training manager at Hewlett-Packard. There she measured change in workplace performance, improved manufacturing processes, managed external training consultants and led training programs for management teams that focused on business mission, strategies for success and company culture.

She moved to Concord, Massachusetts, in 1991 with her husband Jim Marggraff, an MIT grad, serial entrepreneur, and patented inventor who co-founded StrataCom in 1986, which Cisco purchased for $4.5 billion a decade later (according to The Rotarian magazine).

At Genetics Institute, a biotech research and development firm in Cambridge, she managed employee, management and leadership training.

“It got gobbled up by the pharmaceuticals, as did other small genetics companies,” Marggraff said. “During that time, I’m having babies, and they let me go part-time, which was unheard of then.”

After five years at Genetics, however, Marggraff said she made another cross-country move.

“Jim had an opportunity — he’s an East Coaster — and we moved to the East Bay. He had to practically peel my fingers off the doorknob,” she said. “I loved Concord, and I didn’t want to move.”

Her husband’s opportunity would lead to the founding of LeapFrog — the second of a total of six companies he has founded, co-founded and/or led to date — and the invention of the LeapPad Learning System of interactive talking books for children.

“We like to say we left as two for the East Coast and came back as four,” Marggraff said. “When we moved, the kids were 4 and 6.”

After returning to California in 1996 and building a house, she asked herself: “What do I do? I can do the PTA, but I’m not really a PTA person. What I want to do is so unusual. People are saying, ‘You’re crazy.’ If I’m an outlier, what do their lives look like?”

Marggraff said that for a couple of years, she was a full-time stay-at-home mom. She did the PTA, cookie making, and school drop-offs and pick-ups. She said she liked to “demo projects.”

“The coup de gras was losing my planner,” Marggraff said. “It was a paper planner, but (change) had been coming.”

Saturday afternoon, she will share her story of turning her childhood dream of flying airplanes into a reality and becoming both a ground and flight instructor.

Moreover, Marggraff will talk about reawakening her interest in space. She has served as a mission support rep and space agent for Richard Branson’s commercial space line Virgin Galactic, led the team of STEM students that designed StarCatcher (a game for astronauts to 3D print and play on the International Space Station), founded GravityGames, which “inspires students for space,” co-founded Sunspot and wrote an inspirational memoir.

In addition, she may well share some of the findings from her research on “isolation that astronauts experience during long space flights.” Currently, Marggraff is a doctoral student at the University of Southern California’s Rossier School of Education.