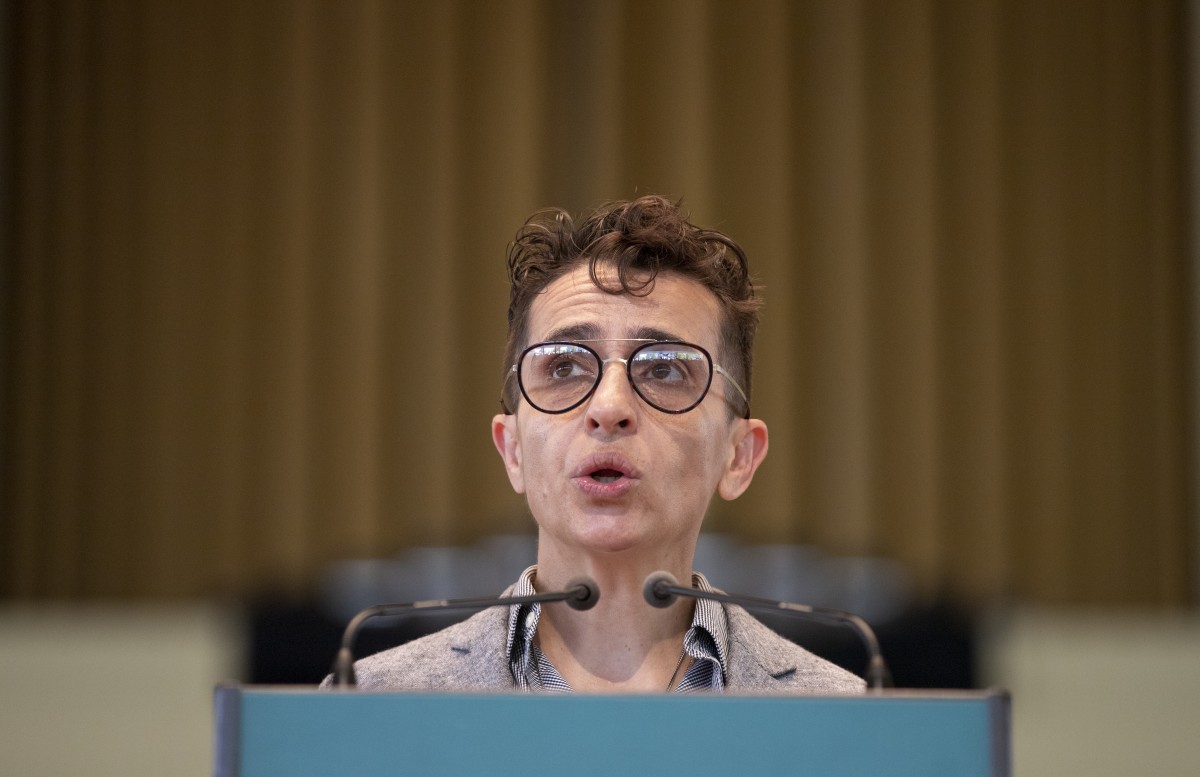 A once-banned field in the Red State, sociology is making a comeback — and it’s helping Masha Gessen imagine a Russia, post-Vladimir Putin.

At the 10:45 a.m. morning lecture on Friday, July 20,  Gessen spoke to what might happen when Putin leaves office, based on patterns of historical Kremlin transitions. Gessen closed Week Four’s theme, “Russia and the West,” to a packed Amphitheater.

The author of The Future is History: How Totalitarianism Reclaimed Russia, which won the 2017 National Book Award for Nonfiction, Gessen experienced the rise of Putin firsthand while working as a journalist; the author was famously dismissed as editor of Russian science magazine Vokrug Sveta for refusing to send a reporter to observe Putin hang-gliding with cranes.

Gessen and other journalists around Russia were convinced Russia would adopt democracy after the fall of the Soviet Union in 1991 — that the Kremlin would establish a Congress, social movements would sweep the country and Russia would become a global player. Gessen said they were naive.

And while societies aren’t people, Gessen said, they are composed of people and are profoundly changed by the “abuse” of those people. And not dissimilar to people, societies develop coping mechanisms and devices for abuse.

However, after the Russian Revolution of 1917, Vladimir Lenin envisioned a new society — a “new man” — in perfect harmony with itself.

To create his new society, Lenin exiled historians and philosophers. Since there would be no deviancy, he saw no need for psychologists or sociologists and banned the professions. Lenin appointed new professionals, Gessen said, equipped with a simplified version of Marxism.

Over time, the Marxist elite realized they were not in touch with the lives of their people. In a democracy, Gessen said, people have the opportunity to express their opinions through voting and dissent; the Soviet Union had none of these measures.

“They didn’t know what people thought or how they thought,” Gessen said. “They literally, with every passing year, knew less about how people lived day to day.”

And while socially this became a problem, it also became a problem in central planning. The culture of the Soviet Union was that of emanating greatness at whatever cost. Gessen said that “every industry lied to the center community of the Communist Party” about producing whatever amount of product was needed.

Because of this methodology, a heightened fear of shortages grew. Lenin quickly reinstated sociologists to report on the conditions of the Russian people. Sociologist Yuri Levada was at the center of the research.

However, Lenin feared sociologists were learning too much about Russia’s people and his fleeting idea of a new man in a harmonious, new society.

After his research was suspended, Levada went underground. He met with other professionals in secret societies to study Western sociology. Gessen described their work as a hybrid of scholarship and investigative journalism.

“This is not actually unique in the Soviet Union,” Gessen said. “The way of doing scholarship in quasi-underground home bases was something that was happening simultaneously in many paralleled fields.”

This went on for 20 years, Gessen said, until the late 1980s when something odd happened; Mikhail Gorbachev of the Communist Party was selected as the new general secretary (essentially, the head of state).

Gorbachev began making reforms, but like his predecessors realized he had limited information on his people. As part of his efforts, Gorbachev brought Levada out of hiding. After 20 years of reclusive work, Levada was left with a predicament: He had no experience in creating or conducting a survey, and sociological research in the Soviet Union was taboo and seemingly unheard of.

“(Levada was) working with people who, for 70 years, had been banned from expressing their opinion, and (his) job was to go out and ask people their opinions,” Gessen said. “It was an impossible task.”

Levada eventually developed a questionnaire to measure aggression among Russians. The questionnaire asked, “What should be done with:”

“Rock musicians and people who listen to rock music.”

The response options were:
“Leave them alone,”

“Give them medical treatment,”

Opinions on homosexuality were mixed, Gessen said. The majority of Russians thought they should be liquidated. Others said “left alone” or “given medical treatment,” but people tended to be tolerant of alcoholics.

The survey provided Levada with a base-level understanding of Russian social dynamics, but what blossomed from it was his hypothesis that Lenin had, in fact, created “a new man,” which he dubbed “homo sovieticus.”  Levada hypothesized that homo sovieticus had adapted to the Soviet rule in distinct ways, inducing “doublethink.”

Russians believed in their country’s power and greatness, yet felt slighted by Russian leaders. These emotions paralleled one another but never came into conflict. As Gessen put it, “(they) pretend to work, (the government) pretends to pay (them)” — that, Gessen said, is doublethink.

Levada hypothesized that homo sovieticus was a generational phenomenon that had decreased since the death of Joseph Stalin, and would eventually die off with the death of communism.

After the dissolution of the Soviet Union, Boris Yeltsin came into power. He strongly believed he could build a democracy on top of a former totalitarian state and that switching to a market economy would boost the nation’s wealth. Gessen described this as “trying to make fish out of fish soup.”

For Gessen’s profession, this was a great time; journalists were able to cover once-forbidden topics, writers created new genres, and local businesses reinvented themselves.

“For a small group of people, it was all terribly exciting,” Gessen said. “For the larger country, it was just destabilizing and frightening and mean. In some ways, Russia had created a type of capitalism that had always been written about in Soviet newspapers. It was a caricature of Western capitalism. It was brutal, it was lawless and it was grounded in this incredible uncertainty.”

As the Iron Curtain lifted off the Red State, Russians began traveling abroad and quickly realized the magnitude of their ill treatment. They saw that the lower-middle class in countries like Spain or France, Gessen said, lived better than Russians who believed they were well-off.

“An incredible kind of resentment took hold because what had they been sacrificing?” Gessen asked. “They had thought that they were part of a great country, a great nation — that was no longer there. It had gotten smaller, it had stopped being a superpower and it turned out they were not as well-off as they thought they were.”

In 1994, Levada conducted his study again. The second trial revealed that homo sovieticus was not generational and doublethink was still apparent in a post-Soviet age. Based on his findings and the presence of homo sovieticus, Gessen said, Levada feared a totalitarianism relaunch.

Levada recreated the study again in 1999 — the year Putin announced his run for president.

“And they came back with an even more disturbing conclusion: They said homo sovieticus is not only thriving but reproducing,” Gessen said. “… It shouldn’t have been surprising. Why should people have to change their adaptation strategies? Why should people finally heal?”

Levada concluded that post-Soviet Russia was exhibiting all the hallmarks of a communist society, and Putin was eager to fit that narrative; he wanted to “make Russia great again,” Gessen said, and in doing so, restore its old narrative.

With skyrocketing oil prices and a prospering economy, Putin established power and eliminated remnants of democracy in Russia. These efforts were welcomed, Gessen said, because of the “freedom to, freedom from” theory.

“Freedom from” is a negative freedom that prevents free will, whereas “freedom to” is a positive, self-directed freedom. Gessen said when people feel overwhelmed by “freedom to,” they look for a leader to take away their agency.

This is what happened in Russia and it is what, Gessen said, is happening in the United States.

Gessen said homo sovieticus and Putin’s rise to the presidency is a prologue to what could happen in a post-Putin Russia.

“There will be great opportunity for Russia when Putin leaves, but there will be great difficulty, probably the kind of difficulty we will have never seen anywhere in the world — that experiment has never been conducted anywhere,” Gessen said. “And so, I am not terribly optimistic about what will happen.”

After the conclusion of Gessen’s lecture, Chautauqua Institution Chief of Staff Matt Ewalt opened the Q-and-A by asking who is fit to lead Russia after Putin.

“I can’t answer that question because you can’t see people who might be able to lead in a country where the public sphere doesn’t revolt,” Gessen said. “That is a trope used by Putin and his supporters. They say, ‘Look, there is no alternative.’ Well, of course there’s no alternative because the alternative is either jailed or forced into exile or killed.”

Ewalt followed up by asking how other countries should react to a post-Putin world.

“I think the rest of the world should be more attentive to signals that come from Russia and perhaps more trusting of them on the one hand,” Gessen said. “On the other hand … the mistake that was made in 1991 was making assumptions on how Russia was about to raise democracy. … Anything is possible, but whatever is possible is probably different from what we’ve seen elsewhere.”

To close Week Four, Ewalt asked a question from Twitter: “What do you think are the best possibilities for positive interactions between Russians and Americans now?”

“Is that a trick question after Helsinki?” Gessen joked. “I actually object to the question because I think it implies something that is well-intentioned but not there — it’s this idea of citizen diplomacy that can supplement intergovernmental relations. There is something very (good-natured) about it, but I think it is fundamentally misguided.” 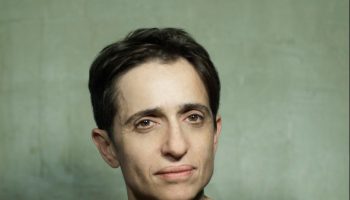