Powell steps into another playwright’s shoes in ‘An Octoroon’ 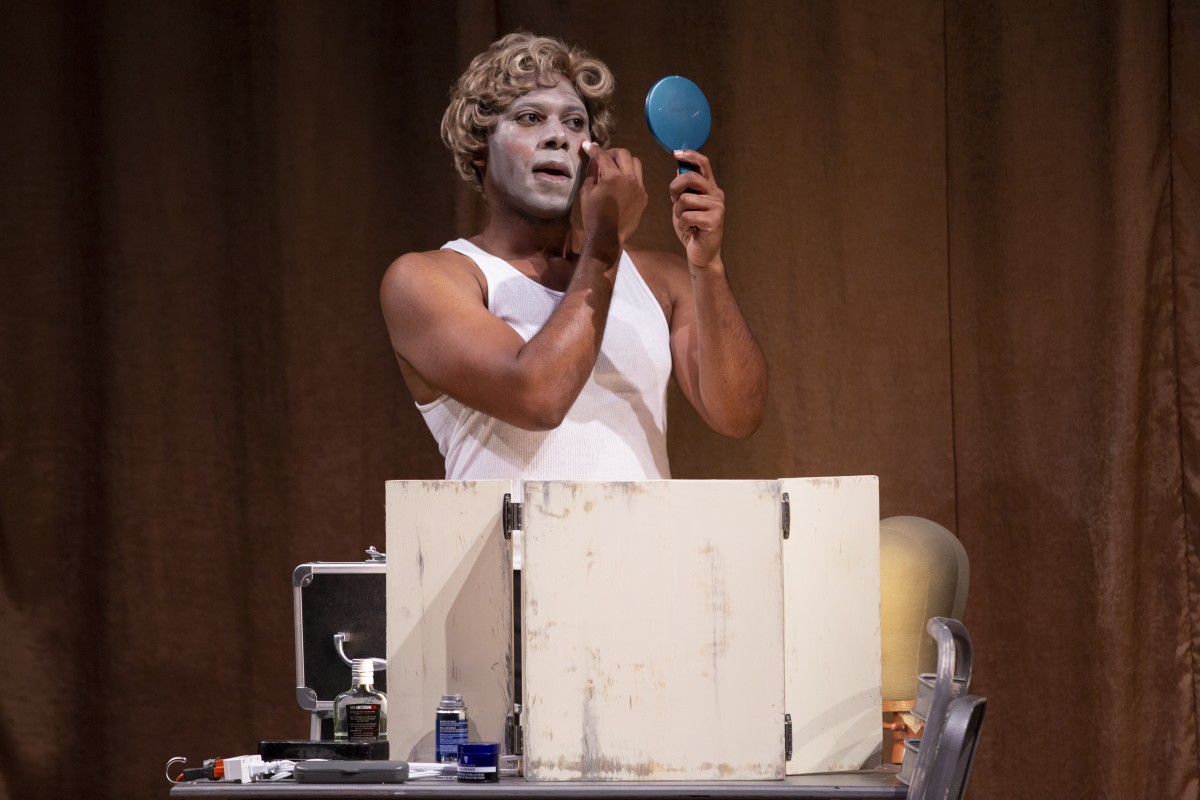 In the prologue of An Octoroon, Larry Powell bares all on stage — and not just because he is in his underwear.

The guest artist plays BJJ, a playwright who tells his therapist and the audience that he feels pigeonholed by the theater industry to write about race, a sentiment that Powell shares.

“He actually is saying things that I thought and wish I could say to a large group … or wouldn’t dare to say. That is at once liberating and empowering.”

BJJ appears throughout the show as a metatheatrical framing device for An Octoroon’s play-within-a-play about a Louisiana plantation. Chautauqua Theater Company continues its run of An Octoroon with performances at 2:15 and 8 p.m. Thursday, July 5, in Bratton Theater.

Powell’s character is based on the melodrama’s actual playwright, Branden Jacobs-Jenkins, a man Powell knows firsthand through New York City’s black arts community. Powell said their relationship made it easier for him to portray a version of Jacobs-Jenkins on stage.

“I’m not going to do an impersonation of him, so on the one hand I’m sort of freed,” he said. “I’m not guessing at who this guy may be, and I’m able to put my full self into it.”

At the behest of his therapist, BJJ tries to get out of his funk by writing an adaptation of Dion Boucicault’s The Octoroon. When the white actors quit the show because their racism isn’t “complicated,” BJJ puts on some makeup and steps into the roles himself, just as Jacobs-Jenkins did in a 2010 workshop of the play at Performance Space New York.

As BJJ, Powell also plays George and M’Closky. The former is a virtuous and naive plantation owner, while the latter is a scoundrel trying to steal the Terrebonne plantation for himself.

Powell said these two characters are two sides of the same coin and that BJJ’s decision to play the roles himself is a testament to the black arts community’s tenacity.

“What, is he just not going to do his play anymore because these white guys are quitting because they feel it’s melodramatic even though that’s what Boucicault wrote?” he said. “It’s less about whiteface than it is about somebody not taking ‘no’ for an answer.”

Growing up, Powell said that race was always in front on him. From seventh through 12th grade, Powell was one of two people of color at his private school in Los Angeles, while at home he was called “White Boy” because of the way he talked.

“I always had this experience of not being white enough for Oakwood and not being black enough for the hood,” Powell said. “I sort of existed in this brief hiatus on the bus to and from the valley in LA and the hoods of South-Central, and that’s where I would become lost in story somehow.”

Powell said he credits movies like “The Little Mermaid” and “Antz” for sparking his fascination with stories, playwriting and illustrating. Raised by a single mother of three, Powell said it was this fascination that kept him away from the dangers of South-Central LA.

“Writing and making up stories, even with my own camcorder, it got me through a lot of times,” Powell said. “It kept me safe in my bunker of imagination.”

A graduate of Carnegie Mellon University’s School of Drama, Powell continues playwriting to this day. He compares his writing process to that of a medium or fortuneteller trying to channel the story through a crystal ball.

“I really am excited by bringing what I’m hearing through, like mediums do when they bring spirits through,” Powell said. “I really set out to prepare myself to set the stage for that event to happen.”

Among his many acting credits in theater and film, Powell said he sees a connection between playing BJJ in An Octoroon and his 2013- 2015 run as Joshua in Lucas Hnath’s The Christians, performed at the Humana Festival, Playwrights Horizons and Mark Taper Forum. The Christians will also open CTC’s 2019 season.

“The Christians was challenging to people’s belief systems and upbringing, but everytime we did it it was successful,” Powell said.

An Octoroon’s director, Giovanna Sardelli, said Powell is one of her favorite actors to work with, which is why she invited him to Chautauqua this summer. Sardelli said she knew Powell would be a great mentor to the conservatory actors in the cast.

“Working with Larry, I knew he would bring grace and intelligence and extraordinary talent,” Sardelli said.

“The Mountaintop was one of the hardest things I’ve ever done,” Powell said.

“It was my first time doing a two-person play. Playing Martin Luther King, there was a lot of pressure playing an icon and playing an icon — warts and all, too — at that.”

Like Jacobs-Jenkins and King, Powell said he hopes to someday see an end to colorism in theater and the world at large.