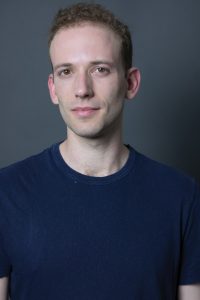 He kicked off his summer by playing a talking shark and other roles for the Young Playwrights Project. Since then, he has played “Facebender” in Airness as well as Duke Frederick and Jaques in CTC’s traveling production of As You Like It.

Rosenberg said that compared to the other characters in Airness, Facebender’s air guitar solos are about telling a story more than showing off impressive stunts.

“What Facebender is doing specifically feels very different from what a lot of these air guitar guys are doing because he is specifically reaching out to one person in the audience,” he said. “He is so emotional. He can’t control his emotions at all. It’s always just spilling out of him.”

Where he’s from: Rosenberg was born and raised in Miami, Florida, but has lived in New York City for the last nine years. He has five step siblings named Matthew, Matthew, Andrew, Drew and Jillian.

In the fall, he will enter his fourth year at The Juilliard School.

First theatrical memory:When he was 13 years old, Rosenberg played the Ugly Duckling in a production of the musical Honk! at summer camp.

“I just recently looked up the guy who was the drama director at that summer camp that summer to say thank you,” he said. “We had a nice email exchange.”

Proudest theatrical moment: At Julliard, Rosenberg played Richard II, which he said was his most challenging role to date.

“We rehearsed it for eight weeks, and we really got in the weeds on it,” Rosenberg said. “I’m proud simply to have made it to the other side of that. Still being here and still having the will to act at all feels like a victory.”

Favorite playwrights: Rosenberg said he would love to originate roles for plays by Annie Baker or Lucas Hnath.

“I have a pipe dream that I’ll get to work with Stephen Sondheim before he dies,” Rosenberg said.

Favorite way to relax: When he is not playing basketball or training for a marathon, Rosenberg likes to do the daily crossword puzzle.

What he’s reading: George Saunders’ Lincoln in the Bardo, a novel about the 16th president’s grief after the death of his son.

What he’s listening to: Rosenberg enjoys a podcast called “The Starters.”

“It’s such a nice thing to take a break from everything and listen to four guys talk about the NBA for a little while,” he said. “The NBA is a big source of relaxation and joy for me.”

What he’s watching: Rosenberg is watching “Casual” on Hulu.

Best Halloween costume: Rosenberg’s mother and stepfather had a costume wedding a few days before Halloween and decided to dress as the bride of Frankenstein and Frankenstein’s monster.

“I was 10 and didn’t know anything and thought it would be funny to wear a Bill Clinton mask and one of those hoods that Death wears,” Rosenberg said. “It was a meaningless costume, but the party was fun, and it was a cool way to get married.”

Annual Student Exhibition to feature work from School of Art