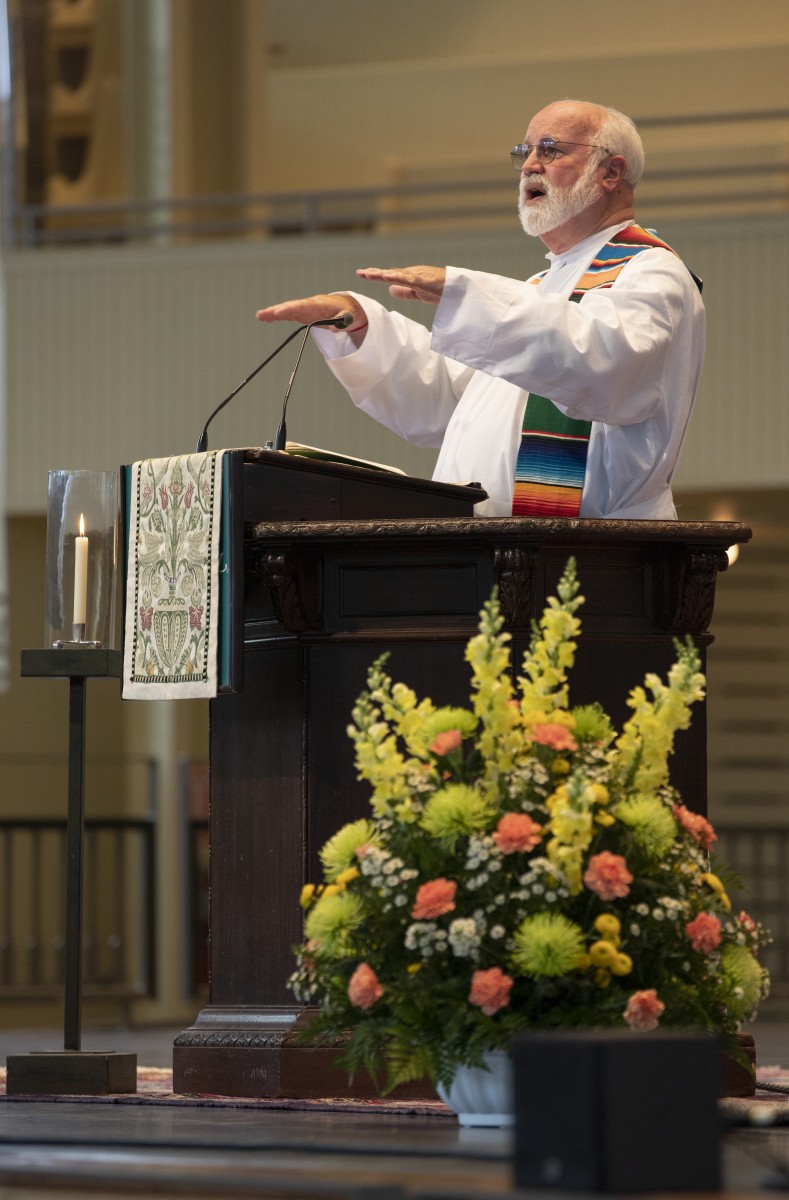 Fr. Greg Boyle, S.J. was sitting in his office at Homeboy Industries one day, and Hector came into his office. Hector was a gang member who had dropped out of elementary school but came to Homeboy and returned to school. He was finding himself and his intellect.

“He was trying his hand at small talk, and he told me that a man who attended one of my talks found it ‘rather monotonous,’” Boyle said. “I said to him, ‘Really?’”

“No,” Hector replied, “but I need to practice using bigger words.”

Boyle told Hector to practice on someone else.

Boyle preached at the 9:15 a.m. Wednesday morning worship service on July 18 in the Amphitheater. His sermon title was “The View from Here,” and the Scripture lesson was Mark 14:3-9, Jesus dining with Simon the leper and the woman with the jar of nard anointing him.

“The Gospel can sound pretty same old, same old,” Boyle said. “How many times have we heard ‘the poor you will always have with you’? It could sound like Jesus is throwing up his hands and giving us an excuse to do nothing.”

“It is not policy; it is proximity,” Boyle said. “Jesus drew a circle of compassion where no one was outside. That is why he dined with Simon the leper.”

By inching their way to the margins, disciples erase the margins if they stand there with “the poor, the powerless, the voiceless, those who have been denied dignity whose burdens are more than they can bear, the easily despised, the readily left out,” he said.

Why stand in the margins?

“God said, ‘As I have loved you, you need to care for the widow, the orphan, the stranger,’” Boyle said. “These are the people likely to get cut off, but these people are trustworthy guides to kinship with God.”

Pedro Arrupe, 28th superior general of the Society of Jesus, is one of Boyle’s heros. Arrupe visited some favelas in Brazil, and was invited into the home of an old man who told Arrupe that he had a gift for him.

Arrupe entered the man’s hovel and his eyes filled with tears, Boyle said. The man pointed to a hole in a wall and said this was his gift. When Arrupe looked, there was a beautiful sunset framed by the hole. The man’s gift was “the view from here.”

“We don’t go to the margins to make a difference,” Boyle said. “We go so the folks at the margins make us different.

They are not empty vessels waiting for us to fill them. They are not needy, they are needed.”

There is no salvation outside the poor, he said. They touch the well of tenderness in “our own hearts.” Jean Vanier, founder of L’Arche USA, said he had been “taught in the university of the poor.”

“Just checking to see if you were still listening,” Boyle said. “I have never done one of those.”

One day, Boyle had rushed back to his office to look at the mail before a baptism, and Lisa came in to see him. Lisa was known as “The Screamer.” She could always be heard on the street screaming into the phone, begging to stay with a friend or relative for just one night.

She was a heroin addict, gang member, prostitute and felon.

“I need help,” she said. “I have been to about 50 rehabs. I went to Catholic schools all my life, and the night I graduated from Sacred Heart High School was the first time I shot up heroin. And I have been trying to stop since that moment.”

She cried, and Boyle let her cry.

Boyle said her shame met his because he had mistaken her for “an interruption.”

“The principal suffering of the poor is shame and disgrace,” Boyle said. “The poor are our guide from suffering to loving. As we criminalize the poor, the traumatized, the dejected, the mentally ill, the poor are trustworthy guides to loving.”

In the poem “On the Mystery of the Incarnation,” poet Denise Levertov wrote, “It’s when we face for a moment the worst our kind can do, and shudder to know the taint in our own selves, that awe cracks the mind’s shell and enters the heart.”

At the 3:15 p.m. Tuesday, July 17, gathering at the Disciples of Christ House, Homegirl Dani participated in the presentation and thanked the audience for not judging her.

“The measure of the health of a community is when it stands in awe of what the poor have to carry, rather than judging how they carry it,” Boyle said.

Once, Boyle was invited to speak to a group of social workers in Richmond, Virginia. It was a daylong in-service training, and Boyle assumed that he would be the morning keynote or speak at lunch or sum up the day.

“The week before I was supposed to go, I opened the invitation letter and saw I was the only speaker, all damn day. Hell no,” he said. “I called in two homies, Andre and Jose, and told them they were going to Richmond with me and tell their stories. Take your time, I told them, we have a long ass day to fill.”

Jose went first and said: “I guess me and my mom didn’t get along so good. When I was six, she said, ‘Why don’t you just kill yourself because you are a burden to me.’ ”

“But it sounds worser in Spanish,” Jose said.

When he was nine, Jose’s mother took him to Baja, California, and left him in an orphanage, telling the staff she had found him in the road. It took his grandmother 90 days to get his mother to tell her where he was, and his grandmother rescued him.

She beat him every day, and Jose had to wear three T-shirts to school. One T-shirt did not cover up the blood; with two, the blood still leaked out; but with three, the blood did not show.

The kids in school made fun of him, saying “Hey fool, don’t you know it is 100 degrees out.”

Jose wore three T-shirts well into adulthood because he was ashamed of his wounds.

“Now I welcome them,” he told the social workers. “I run my fingers over my scars, and the wounds are my friends.”

He had become a substance abuse counselor at Homeboy.

“How can I heal the wounded if I don’t welcome my own wounds?” Jose said.

Awe came over everyone, Boyle said.

The poor are always with us, he said, if we choose to be near them.

“We are not charting policy but choosing proximity,” Boyle said. “Disciples are students at the university of the poor. We are altered by those at the margins. … If we all go there, we will find they rescue us. Location, location, location. Awe cracks the mind’s shell and enters the heart. We cease to care if anyone thinks it is a waste of time because we will hear the voice of mirth and gladness and the voices of those who are singing.”

Deacon Ed McCarthy presided. Adam Shafer, a scholarship student with the International Order of the King’s Daughters and Sons, from Parkersburg, West Virginia, and who teaches second grade, read the Scriptures. The Motet Choir sang “Glory Day” by Henry Mollicone from the opera Gabriel’s Daughter. Jared Jacobsen, organist and coordinator of worship and sacred music, directed the Motet Choir. The Alison and Craig Marthinsen Endowment for the Department of Religion provides support for this week’s services. 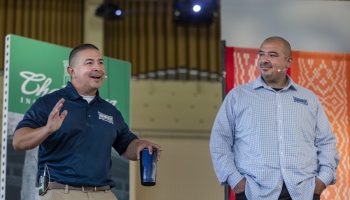