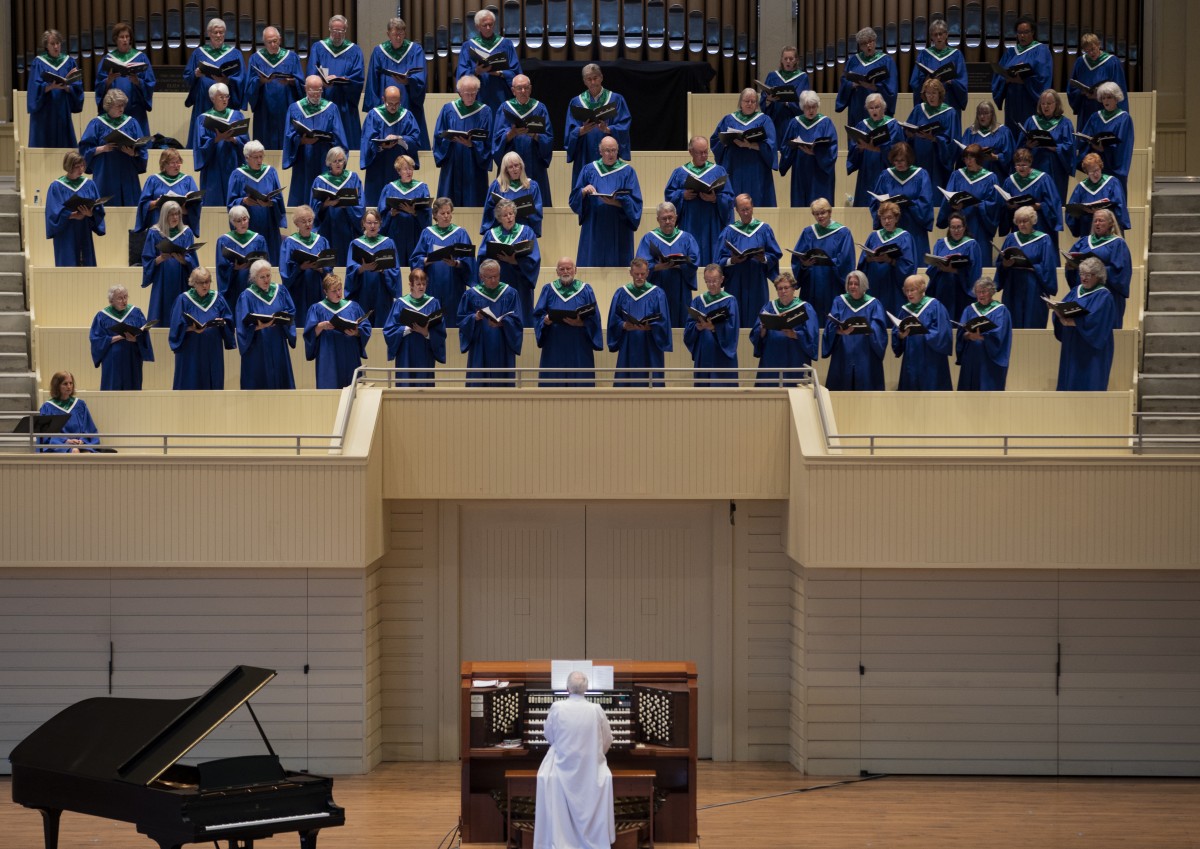 Gold-plated architecture, masses of flickering candles, elaborate murals of Jesus painted on high ceilings — these are the decadent features of the Russian Orthodox tradition Jared Jacobsen hopes to capture during this week’s Sacred Song Service.

“The worship spaces are very elaborately decorated, and the architecture is designed to take your breath away, to help you make a connection between the heavenly and the earthly,” said Jacobsen, Chautauqua’s organist and coordinator of worship and sacred music. “ … I’m trying to find music that will help us understand this, not so much a familiar hymn, necessarily, but just music that you let swirl around you.”

At 8 p.m. Sunday, July 15, in the Amphitheater, Jacobsen and the Chautauqua Choir will perform “The Evidence of Things Not Seen: Russian Sacred Music,” a service that Jacobsen said will help bring the mystery and magic of Orthodox tradition to Chautauqua.

And he believes the Amphitheater is the perfect location to accomplish this task.

“When you walk into the Amphitheater, specifically in the evening as the sun is starting to go down, you still are hearing things rustling in the trees, and you get the sense we take worship very seriously here,” he said. “So I’ve chosen a bunch of music that I hope will submerge the audience into this evidence of things not seen.”

Even with an ideal space and an eager choir, Jacobsen knows that communicating the Russian spirit through music is difficult. Russian sacred choral music, he said, is like a pyramid because it requires a strong foundation to support the rich sound.

“It’s a pretty wide pyramid at the base,” he said. “As it moves up from the lower notes to the higher notes, you only need a handful of people at the very top. What you need is a lot of people in the middle and bottom so the base of the pyramid spreads out the way the music does. Russian composers are very great at capturing this.”

Jacobsen and the choir will construct this pyramid through hymns like “Send Out Thy Light” by Mily Balakirev and “Heavenly Light” by Alexander Kopylov, both of which will be sung in English.

However, the organist is challenging his choir to sing two hymns in Old Church Slavonic, a language often used in Eastern Europe Orthodox services. One of the hymns the Chautauqua Choir will perform in Church Slavonic is Pavel Tschesnokoff “Lead Me, O God.”

“You can sing it in English because it’s lovely music, but if you sing it in Russian worship language, it’s a whole new theme,” Jacobsen said. “It’s dark, and it’s rich, and it reaches out and grabs you and says ‘Listen to me, this is going to change the way you think about this text.’ ”

The choir will also sing Sergei Rachmaninoff’s “Ave Maria” in Old Church Slavonic, and the concert will conclude with a choral anthem by 20th-century British composer Sir John Tavener. Tavener is not to be confused with 16th-century English composer John Taverner.

“The modern John Tavener channels his ancient ancestor, and he wrote music which comes very close to what Russian music is,” Jacobsen said. “It is very lean and spare and static, and it takes however much time it takes to sing it. You don’t start your stopwatch.”

Jacobsen selected “The Lamb,” a piece Tavener wrote as a tribute to Jesus Christ as the Lamb of God figure, an image used in Christian Scripture. Jacobsen equates this hymn to a snow globe: a song that is musically compressed but packed with emotion and imagery, much like Russian Orthodox worship spaces.

For this reason, Jacobsen believes “The Lamb” was composed “in the Russian spirit.”

“Inside of it, there’s all this sense of awe and wonder and timelessness,” Jacobsen said. “It’s like a snow globe that has the entire Milky Way galaxy inside. That, for me, has brought this Russian music out of the history books and into the here and now.”