Alice Walker was 29 when she trekked through Florida in search of Zora Neale Hurston’s unmarked grave.

The year was 1973. With her own money, Walker placed a grave marker with Hurston’s name on it — nearly a decade before Walker would publish the The Color Purple. 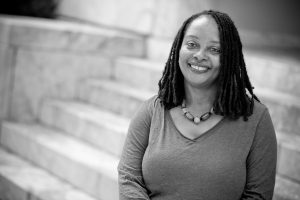 Boyd will deliver her Brown Bag, titled “Literary Kinfolks and ‘Skinfolks’: Exploring the Lives of Zora Neale Hurston and Alice Walker,” at 12:15 p.m. Friday, July 20, on the front porch of the Literary Arts Center at Alumni Hall.

Boyd writes narrative nonfiction and teaches at the University of Georgia. She authored the biography Wrapped in Rainbows: The Life of Zora Neale Hurston and is the editor of the upcoming Gathering Blossoms Under Fire: The Journals of Alice Walker.

Her lecture will focus on the historic relationship between Walker and Hurston and Boyd’s own special connection to the two writers, after having devoted the last decade to archiving the women’s lives.

Boyd described her work on Gathering Blossoms as a “labor of love.”

“It’s been an extraordinary opportunity to dive deeply into her work (and) inner life,” Boyd said. “Her journals are very personal and very revelatory, and I feel honored that she’s allowed me to have the first look at this rich inner life.”

She said it was sheer admiration for Hurston that inspired Walker to search deeper into the 20th-century writer’s life.

Boyd said Walker viewed Hurston as a “literary aunt,” which resembles her own literary kinship to the two writers.

“It’s a very specific relationship that these two authors have, and I think of them as kind of a literary mother and a literary grandmother to me,” she said. “And so I think of myself, in a way, as a third generation in that line.”

Boyd read Walker’s work for the first time in high school and Hurston’s Their Eyes Were Watching God in college.

“They had a profound impact on me,” she said. “And now I’m just fortunate that I get to write about them and their work and understand that they didn’t just have an impact on me; they had an impact on multiple generations of readers.”

Boyd hopes listeners of her Brown Bag will walk away with an appreciation for “why it’s important to honor the work of these women.”

“I hope they’ll be inspired by my story and by the kind of ancestral kinship we can find through writers who have come before us, to find ourselves in their writing and … inspiration for what we want to do in our present time,” she said.