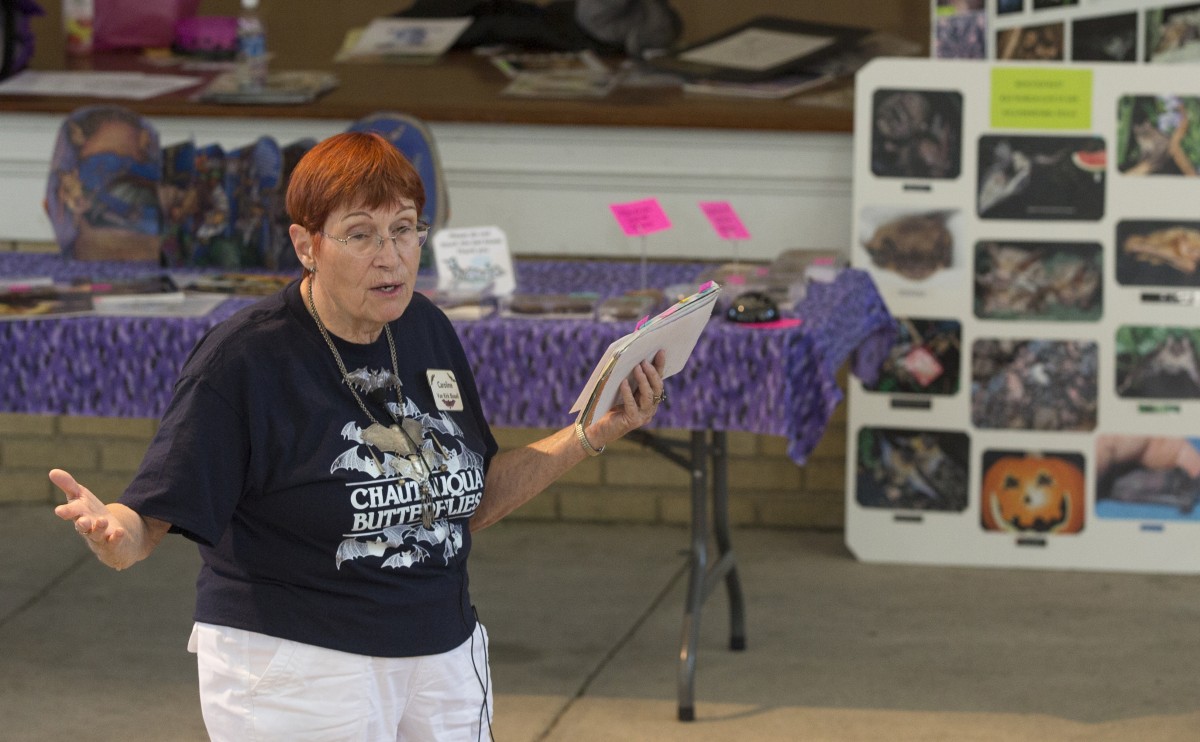 Caroline Van Kirk Bissell started coming to Chautauqua in 1946. A certain presence caught her attention and fascination from a young age, swirling in the night skies, living in her attic — bats. For 18 years, Bissell has shared this passion with Chautauquans.

Bissell will deliver her final Bat Chat at 4:15 p.m. Wed., Aug. 22, in Smith Wilkes Hall. After the previous naturalist who held the chats stepped down in 1999, Bissell was approached to step in by the former Bird, Tree & Garden Club president.

Bissell spent the winter researching bats, absorbing as much information as possible to condense into a one-hour lecture each week. Bissell said trying to share all the information she wants at the chats is a challenge.

Bissell has seen the bat populations at their peak — 10,000 or more — and at their worst in recent years after populations were ravaged by white-nose syndrome (WNS). As a child on the grounds, Bissell said people took the bats for granted.

After WNS went through the area, the once large and healthy bat populations were reduced to fractions or their former selves, if not eliminated.

“It’s a relentless fungus, and it irritates the bats while they’re hibernating and sleeping,” Bissell said. “Since bats hibernate so tightly, it just goes from bat to bat to bat.”

With bats few and far between now at Chautauqua, Bissell’s chats offer a chance for audiences of all ages to learn about the bats that were, for so long, synonymous with the grounds.

“We get a lot of visitors, and we don’t want them to freak out,” Bissell said. “If you see a bat, we want you to not be terrified because of the old wives tales we all used to be told.”

Bissell clarifies some of these myths, such as high rates of rabies and other supposed risks bats pose
to humans.

In addition to her time giving Bat Chats, Bissell served on the board of the BTG for 19 years, following in her mother’s footsteps.

BTG president Angela James said it’s remarkable what Bissell has accomplished through her time, sharing information and joy with generations of Chautauquans.

“Caroline is an entertainer,” James said. “She is a fun presence to all ages. And nobody loves bats as much as Caroline. I think it’s great there are multiple generations in BTG and we’re always welcoming the next generation.”

The BTG honored Bissell last year at the club’s annual life luncheon with a special poem and proclamation chronicling her time with the organization. Although conditions with bats have changed drastically throughout Bissell’s time giving the chats, James said she continues to own the 4:15 p.m. time slot on Wednesdays.

“She continues to keep bats at the forefront, and bats are part of the BTG’s mission statement,” James said.

BTG communications coordinator Susy Warren said Bissell has helped ensure the bats haven’t left Chautauquans’ minds, despite not being seen nearly as regularly as they once were on the grounds.

“Caroline kept that information going so they weren’t forgotten, so we didn’t just write them off,” Warren said. “Where else in the world would you go to learn about bats, especially in such a fun way?”

Teaching herself so much about bats makes Bissell a great role model, especially for young audiences, Warren said.

“If there’s something you’re really interested in, there are ways you can learn about it,” Warren said. “And you can become an expert in it.”

While the BTG said they will continue to further education and awareness for bats in the area through their programming, Warren said it will take time to replace what Bissell has established.

“It leaves a hole,” Warren said. “It isn’t the Bird, Tree, Bat & Garden Club. But it might as well have been.”