When a CLSC Young Reader has read 16 books on the historic book list, they can receive a Medallion Award and a certificate. To verify, they need to submit a filled-out form on a green card, with 16 lines to write down titles of the 16 books they have read. 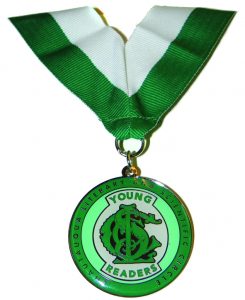 This summer, when 11-year-old Maggie Coggin came into the CLSC Veranda with her filled-out form, she said she had actually read 22 books from the list — more than what’s required, but they would not all fit on the card, recalled CLSC Veranda Manager Stephine Hunt.

This summer has been “a good season for the books,” Hunt said, and she is “excited that we’ve had more than double the amount of medallion recipients this season from last season.”

“The CLSC Young Readers program is a great way to get kids involved on the Chautauqua grounds beyond Boys’ and Girls’ Club and Children’s School,” Hunt said. “… It’s always exciting to see so many Young Readers, when you’re hearing in this world that so many kids prefer not to read books now.”

Hunt said that nowadays, there are many entertainment options available other than books, including video games, tablets, phones and social media.

“It’s not common for parents to hand their kids a book to distract themselves or entertain themselves,” Hunt said. “It’s more common for people to hand them a video game controller or a tablet.”

“It was just so cool that I got an award for doing something I love so much. It’s just something I do.”

Through books, kids “can discover something new about themselves or the world around them,” according to Molly’s mom, Colleen Kessler.

“It’s so important to raise readers,” she said.

“Like my Molly. She loves stories, … she would get lost in the pages of the book, and feel a piece of herself in the different characters,” Colleen Kessler said.

Molly said that when she is reading a book, she feels like she is taken “somewhere else, whether it’s to a normal home like mine, or (a) magical world.”

“It’s just so amazing that these little bits of paper can have such beautiful things written up,” she said.

For 12-year-old Charlotte Griffith, reading makes her “feel like you are there, kind of feeling like you are watching it all happen. But it’s not like a movie, where you are just seeing what they are meaning you to see.”

“You can make the story, almost like your own, like you can make your own world out of the story,” she said. “That’s really my favorite thing, not just watching someone else’s version of it. You are kind of seeing it through your eyes, almost.”

According to Charlotte’s dad, Dave Griffith, when Charlotte was on the Chautauqua grounds for seven weeks, she spent most of her days in the library. While Charlotte is home in Indiana, she rides her bike to the library on her own.

In addition to being Charlotte’s father, Griffith serves as vice president and Emily and Richard Smucker Chair for Education. Griffith said he thinks that “books remain a safe way for young people to explore the world.”

Books are “great companions” for young readers, Griffith said, and books introduce people to places that they’ve never been.

“I think as a young person, (books can) challenge a notion of who you are and where you are from, and expose you to ideas that you will never come to naturally on your own,” Griffith said. “You are really creating a young person who is going to be able to think outside of their own realm of experience, which can be very limiting — that realm of experience.”

Hunt believes that reading about other people’s stories — fictional or not — teaches kids empathy and understanding.

Many books from the 2018 selections for CLSC Young Readers, Hunt said, introduce kids to people whom “they may have a difficult time encountering, unless they are forced out of their comfort zone.” And these books introduce them “to ways of life that the kids might not know, like in Ahimsa” by Supriya Kelkar, a book about an Indian family, or Angie Thomas’ The Hate U Give, which introduces kids to racial tensions in America.

“I think these characters, particularly in the selections from this year, … are inspiring and thoughtful,” Hunt said. “Their stories reach out to kids and people of all ages, and beyond ages but different lifestyles, as well.”