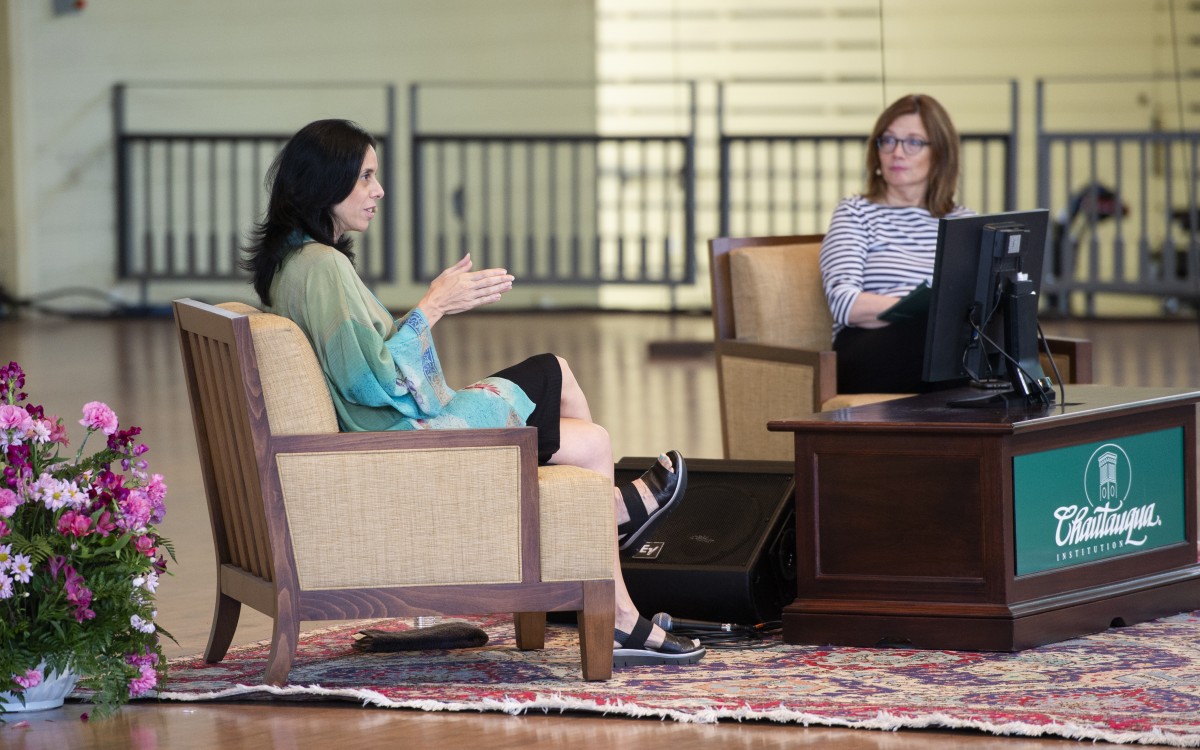 Oscar-nominated documentary filmmaker Rebecca Cammisa spoke to the process and impact of her latest film, “Atomic Homefront” at Thursday’s 10:45 a.m. morning lecture on Aug. 23. She was joined on the Amphitheater stage by film critic Ann Hornaday in a conversation for Week Nine’s theme, “Documentary Film as Facilitator: Storytelling, Influence and Civil Discourse.”

“Atomic Homefront” confronts the effects of radioactive, Manhattan Project-era waste dumped in West Lake Landfill in St. Louis County, Missouri, which drained into the nearby natural water supply; the film chronicles concerned residents of the two affected areas of St. Louis’ suburbs — those along Coldwater Creek and Bridgeton — and the negligence of governmental bodies, including the Environmental Protection Agency. The film is now streaming on HBO.

This was Cammisa’s sixth film; her first film, “Sister Helen,” won the 2002 Sundance Film Festival’s Documentary Directing Award, as well as an Emmy Award for Outstanding Cultural and Artistic Programming, and was nominated for an Outstanding Directorial Achievement in Documentary Film Award by the Directors Guild of America.

Her 2010 film, “Which Way Home,” was nominated for an Independent Spirit Award for Best Documentary, received four Emmy nominations, and went on to win a News & Documentary Emmy Award for Outstanding Informational Programming and the Robert F. Kennedy Journalism Awards Grand Prize. For her work on the film, Cammisa received a Fulbright Fellowship for Filmmaking. In 2011, Cammisa directed and produced “God is the Bigger Elvis,” which received an Oscar nomination for Best Documentary Short Subject.

Hornaday, who lectured Wednesday, Aug. 22, about role of the audience in film, opened the conversation by asking how Cammisa stumbled upon this story, or if the story came to her.

“The film I set out to tell was about how journalism was under threat,” Cammisa said. “There’s always going to be a Washington Post and a New York Times, but my concern was communities out in this country that are in … small towns whose newspapers are folding, where journalists are being fired — the downsizing.”

However, she ran into trouble; newsrooms aren’t accessible, she said. Thus, she turned her attention to finding a “big story” and then documenting how reporters and publications in that area handled the news. It was a friend that turned Cammisa toward the radioactive waste in Missouri. Again, she ran into difficulties trying to reach the press, scrapping her original plan and dedicating the film solely to the radioactive waste.

“That’s sometimes what happens with doc filmmaking: You have a very specific idea in mind and then you’re somehow moved by some weird, spiritual force that places you where you need to be to tell a story properly.”

Cammisa’s methodology for the film was to jump in and try to understand what was happening, she said. In the case of “Atomic Homefront,” the story became the conflicting testimony between the EPA and the community. Cammisa’s job: finding the truth. She and her crew lived in St. Louis for six months on-and-off, followed by three months of filming on-and-off.

In the first day of filming, Cammisa shot a clip played for the audience. In it: a meeting between the local first responders’ unit and the Missouri National Guard, and an interview from a concerned resident. After the conclusion of the clip, Hornaday asked if filming that meeting was difficult. Cammisa said the first responders were receptive; for the National Guard, however, “we figured, ‘Shoot first, ask permission during.’ ”

The clip also featured graphics of radioactive particles emerging from the ground and spreading. For Cammisa, the graphics became a necessity because the subject of the film — radioactivity — is invisible. As for human dispositions, Cammisa looked for passion when casting interviewees.

One of those fighting, struggling characters is Dan Norris, a clip of whom Cammisa and Hornaday shared with the audience. Norris worked for the West Lake Landfill and initially threw the story at the public with an open letter to the press. In the letter, he writes about the “cozy relationship between the state regulators and (the landfill) company,” corruption and silencing; he became a whistleblower.

The relationship built between Cammisa and Norris was a mutual understanding of the story’s importance, she said.

“Dan — he worked hard, he did his job and what was so lovely about him is he just cared about transparency from a scientific standpoint,” Cammisa said. “He just knows his data, and data sets you free. … When the news was bad, the governor’s office wanted the news to be good. Where have we heard that before? I spoke his language and he understood we were not going to use his interview to do a certain stance or bias.”

Hornaday asked about Cammisa’s approach to the story — did she script scenes or edit before production was finished?

“My films are unscripted,” she said, “because I’m usually going into worlds that I know nothing about or have researched heavily. … So usually jumping into the deep end is what I do. So I go into a world, I’m in it, and then I start to see ‘this is what’s going on.’ But then as things happen … (and) anything I would script — forget about it.”

From there, Hornaday transitioned to the third — and final — clip of the morning, featuring radiochemist Michael K. Schultz, who performed tests on the soil around the original dump site; his tests revealed the levels of radiation were grossly higher than the legal limit. After the conclusion of the scene, Hornaday asked if Schultz was paid to perform those tests — an ethical question of transparency she had addressed in her Wednesday lecture. Cammisa said Schultz was not paid to perform the tests, but was compensated for providing the results and running the tests an additional two times.

Because of their extensive research, inquiry and interviews, Hornaday asked Cammisa if she considered documentarians as journalists — again, a point Hornaday addressed Wednesday.

“I don’t think all of them are,” Cammisa said. “I don’t say I am. If I had gone to journalism school, and really was a professional in the methodology of journalism and had a degree in it, I would call myself a journalist. I don’t. But … when I do a story, I want to adhere to journalistic principles. I want to get everyone’s side of the story; I don’t go in with a bias; I’m really there to try and find out what has really happened.”

As “Atomic Homefront” and the mishandling of radioactive material has garnered attention, Hornaday asked what impact the film has had and how Cammisa has managed its reverberations.

Cammisa said that after the release of the film, a group of St. Louis County citizens held a meeting with Scott Pruitt, who was EPA administrator at the time, at which they played the film. Days later, she said, Pruitt ranked West Lake Landfill as one of his Top 10 Superfund sites; 11 days before the premiere of the film on HBO, the EPA announced its cleanup plan.

“The film helped get traction in terms of the EPA and that’s exactly what we wanted to get to,” she said.

After the conclusion of Hornaday and Cammisa’s interview, Chief of Staff Matt Ewalt opened the Q-and-A by asking for Cammisa to elaborate on how she funds her projects.

Despite being an award-winning filmmaker, Cammisa said applying for funding can be difficult as there is a large community of artists vying for the same grants. Depending on the subject matter, she said, it can be even more cumbersome and Cammisa has “a knack for picking stories that aren’t sexy.”

Ewalt turned to the audience for questions; one attendee asked if since starting this project, Cammisa has turned into an advocate.

“I’m a person,” Cammisa said. “I’m from the Hudson Valley. I grew up swimming in the Hudson with the PCPs. … We’re all tainted or affected somehow by something. And what I’d like to see done is justice and a pure environment. And after experiencing and seeing what these people have been through, it’s really important. So while I’m not an activist, … the film itself just shows you what age this is, what has happened here, and can this help educate and inform other communities? … You know what this film is about?