For generations, the story of America has been told time and time again, but not every story is the same. This is the premise for Andrew Roth’s lecture: “American Tapestry: The Stories We Tell Ourselves.”

Roth, scholar-in-residence at the Jefferson Educational Society in Erie, Pennsylvania, and former president of Notre Dame College and interim president of St. Bonaventure University, will give his lecture at 3:30 p.m. Friday, July 5 in the Hall of Philosophy, as part of the Oliver Archives Heritage Lecture Series.

“I’m a person who, you might say, went away to college 55 years ago and never left,” Roth said.

Roth got the idea for this lecture during a conversation about fractious politics while working as president of St. Bonaventure University.

“Americans no longer agree on the American story,” Roth said.

Roth plans to discuss the year 1968, and how it became recognized as a watershed year due to events like Apollo 8 orbiting the moon and the iconic picture of the Earth rising, as well as the birth of culture wars due to fractious politics, with campaigns growing quarrelsome and irritable.

Some argue that there is no single American story — just American stories. Roth uses the analogy of a tapestry to describe how these varying stories intertwine.

“Some threads are thicker than others,” Roth said. “Some of the main threads are freedom, self government and diversity.”

Roth will also touch on how humanity’s ability to tell stories is what sets humans apart and defines them as a species.

“Stories can help explain where we came from, who we are and where we are going,” Roth said. “We are what we pretend. We have to be careful of the stories we tell.”

Roth will discuss the issues that arise from telling multiple American stories, and how they shape the country’s past, present and future.

“We are trying to do something that is not easy to do: blend diverse people from all over the world to one culture, while respecting diversity,” Roth said.

Roth’s lecture fits into the Week Two theme, “Uncommon Ground: Communities Working Toward Solutions,” by discussing the story of the continuing experiment in the United States of trying to answer questions regarding self government and freedom.

Roth plans on having a conversation with the audience following his lecture about their thoughts and notions and invites people to send him these via email at roth@jeserie.org. 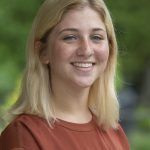 This is Layne Dowdall’s first summer with the Daily and she is serving on the digital editing team. She is a rising senior at St. Bonaventure University, where she double majors in journalism and environmental studies. Layne is from Cattaraugus, New York, and loves watching “Schitt’s Creek” on Netflix.