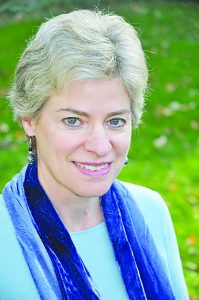 When Clara Silverstein was 6 or 7 years old, her father gave her his old manual typewriter. At age 8, she began publishing The Doggie Gazette, a newspaper that covered the life and times of the dogs in her neighborhood. A savvy designer, she added asterisks underneath the headline for effect.

“I, of course, had no idea I would one day end up being a journalist,” Silverstein said. “I showed it to my mom and she was like, ‘Oh, cute.’ And that was probably the end of that.”

The author, historic food blogger and former 12-year director of the Chautauqua Writers’ Center returns to the Institution for the Week Two Authors’ Hour at 5 p.m. today, July 5, in the Ballroom on the second floor of the Literary Arts Center at Alumni Hall. Co-sponsored by the Writers’ Center and the Chautauqua Literary Arts Friends, this special edition of the weekly event had to be moved from its regularly scheduled Thursday meeting time to accommodate Fourth of July festivities. Silverstein will appear alongside nationally recognized poet William Heyen — “a big honor,” she said — who will read from his collection Yawp: Heyen’s Whitman.

For her part, Silverstein will present excerpts from her new novel Secrets of a House Divided: A Novel of Civil War Richmond, a story about two women — one black, one white — living in the capital of the Confederacy as Civil War battles rumble closer. Her 2013 memoir, White Girl: A Story of School Desegregation, recalls her experience being bused under Richmond, Virginia’s,  desegregation court order. Arriving at a majority-black school familiar only with the Confederate take on the Civil War, Silverstein learned to, in her words, “question the narratives” that guide the mythology of the United States.

During the process of writing White Girl, Silverstein researched the history of her childhood city in order to put “(her) own time in context.” It was then, as she read about the Civil War era and the roots of racial strife that she lived through as a girl, that she first thought to write a fictional account of Richmond’s earlier history. Her favorite historical novels — Jacob’s Ladder: A Story of Virginia During the Civil War, by Donald McCaig; Gods and Generals: A Novel of the Civil War, by Jeff Shaara; and The Invention of Wings, by Sue Monk Kidd — served as inspiration for how to ethically balance fiction with fact in an engaged way. For Secrets, she immersed herself in photos, letters, recipes and slave narratives to craft the intertwined tale of two made-up women grounded in reality. 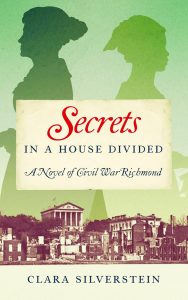 Originally, Secrets was going to revolve around just the white woman’s perspective, but Silverstein “wanted to tell another side of the story” with her black woman character. As a white author, she is aware of conversations around cultural appropriation. Still, she believes that the inclusion of a central black character added depth to her story, allowing her to explore complex dynamics within a historical framework and highlight the manner in which discrimination manifests on a micro and macro level.

“I feel like, as fiction writers, it’s our job to imagine characters that are not like us,” Silverstein said. “I did try to (write) with sensitivity and research, even though I’m white. I own that.”

Now based around Boston, another area rich in early American history, Silverstein directs public programs for the Jackson Homestead and Museum, an estate which served as a station on the Underground Railroad before the Civil War. She enjoys her job, but misses “the literary side” of her life — none of her colleagues are writers. Involved in book groups, she laughs when other members treat her like a “rock star” when she regales them with stories about meeting authors at book signings through the Writers’ Center programming she helped create.

Before she was Writers’ Center director, Silverstein was a student in a poetry workshop. As a busy journalist, she looked forward to the time the summer workshops afforded her to write creatively, and kept coming back.

“I feel like being able to be in Chautauqua all summer and hear from writers at the Writers’ Center, hear their lectures and readings from all the other authors … was a wonderful crash course in contemporary literature,” Silverstein said. “(You learn about) what writers think about when creating their work — not just craft issues but what motivates them to tell a part.”

Characterizing herself as someone who not only directed the Writers’ Center programming, but also directly benefited from it, Silverstein is “happy to see that it’s still going strong” and that workshop leaders still apply a healthy blend of constructive criticism and encouragement.

“I feel like a proud mother sometimes,” she said.

Above all else, she is grateful she contributed to a community to which writers and authors like herself want to return summer after summer.

“Chautauqua is very good at birthing authors through the Writers’ Center,” she said. “It feels really powerful to be able to come back and share what the workshop helped nurture and helped create.”

With her week on the grounds coming to a close, Silverstein plans on savoring every moment.

“I’m looking forward to reconnecting with old friends,” she said. “I want to sit on the porch at the Athenaeum and look at the lake. And the pies at Haff Acres are amazing.”