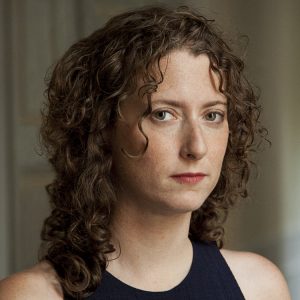 Before she began her Sunday reading in the Hall of Philosophy as the Writers’ Center Week Two prose writer-in-residence, Jessica Bruder showed off the stripe that now gilds new copies of her 2017 book Nomadland: Surviving America in the Twenty-First Century. A Chautauqua Literary and Scientific Circle selection in 2018, the nonfiction book contains the stories of people like Linda May and Ghost Dancer — Americans who forgo traditional housing and travel the United States in search of work.

When Bruder gave her CLSC author presentation in August 2018, Nomadland had already won a Discover Award and been named a “Notable Book” and “Editors’ Choice” by The New York Times.

But the ribbon of yellow on the book Bruder held in her hands last Sunday announces, in all caps, a special development: “Soon to be a major motion picture.”

“Everyone got paid,” Bruder said, sharing that some of the itinerant workers she knows who appear in the film used their compensation to buy new teeth. “I saw people smiling who I had never seen smile before.”

Bruder will recount her own behind-the-scenes reporting process in her Brown Bag lecture at 12:15 p.m. today, July 5, on the porch of the Literary Arts Center at Alumni Hall. Like her workshop, Bruder’s talk is titled “Narratives of Belonging.” It will be a “deep dive” into the intimate relationship between reporter and source, and the way in which those boundaries are sometimes tested.

“I want to share my dirty sock drawer,” Bruder said. “I want to help people build their boneyards. I literally have a file (on my computer) named ‘boneyard.’ I exhume stuff from it all the time.”

Her week-long workshop also deals with this tension between observer and community member, something Bruder grapples with as a journalist who studies subcultures. Bruder hopes that, after her week at the Writers’ Center, those who participated in her workshop or attended her lecture will gain an “observer’s eye” that they can use to interact with “different worlds” and recognize the “greater resonance of human belonging.”

Her work has long involved the odd kinship ties that coalesce when people connect under less than average circumstances.

The 2007 Burning Book: A Visual History of Burning Man is the story of the annual Black Rock Desert gathering that traffics in massive art installations and radical independence, only to vanish when the festival ends. Bruder’s forthcoming book, Snowden’s Box, is an expansion of a 2017 Harper’s Magazine article she co-authored with Dale Maharidge about her experience as the “unwitting mule” for Edward Snowden’s NSA archive (she prefers to refer to that project as “Harold and Kumar Go to the NSA”).

Introducing excerpts of Nomadland on Sunday, Bruder characterized herself as a labor reporter of the modern, low-wage workplace — a beat that lives at the intersection of subculture and social justice. She’s also a “rabid fangirl” of Beth Macy’s Dopesick, a work of reportage about America’s opioid epidemic that Bruder reviewed for The New York Times Book Review and endorsed for the 2019 CLSC season.

Bruder read a section about the “plucky” Swankie Wheels, a woman who has kayaked in every state in America and hoists flags indicative of her mood outside her mobile abode. Next — “in honor of Pride” — Bruder, read a snippet about Vincent Mosemann, a man who lives in a van named Tillie, so called for the train protagonist in The Little Engine That Could, and refers to the gap in his teeth as a “straw holder.” Mosemann is also transgender, and receives his testosterone in the mail on the road. Swankie and Mosemann, who form an unlikely bond that Bruder witnesses and documents throughout the book, are a microcosm of resilience and generosity.

The stories in Nomadland do hinge on the disturbing aftermath of the 2008 financial crisis and instances of worker exploitation abound, but Bruder disagrees with those who categorize Nomadland as “very dark and Grapes of Wrath(-esque).” Hope is a central theme of the book.

“Many individuals in the book describe themselves as ‘houseless,’ not ‘homeless,’ ” she said. “There’s life everywhere.”