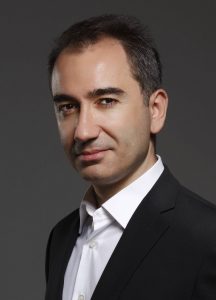 Over the past two decades, Mustafa Akyol has studied the complexities of both Islamic theology and the arguments behind religious freedom.

“I’m not doing theology for theology’s sake, I’m doing it for human rights,” said Akyol, a journalist, nonfiction author and senior fellow at the Cato Institute’s Center for Global Liberty and Prosperity.

And indeed he is — while Akyol has authored books like Islam Without Extremes: A Muslim Case for Liberty, he was also arrested briefly in 2017 by Malaysia’s “religion police” while giving a lecture there on free will in religion.

At 2 p.m. Friday, July 5 in the Hall of Philosophy, Akyol will lead the second Interfaith Friday of the season with a lecture on Islam and the problem of evil. Akyol will be in conversation with The Rt. Rev. V. Gene Robinson, Chautauqua’s vice president of religion and senior pastor.

Akyol is a regular contributing opinion writer for The New York Times and is currently working on his next book, titled Reopening the Muslim Mind for Reason, Freedom and Tolerance.

“I’m writing a new book which delves into the theological conundrums of early Islam, which I believe are quite important today,” he said.

One key dispute in early Islam that Akyol said he’ll cover in his new book is the Euthyphro dilemma, a philosophical problem involving a view of morality and theism discussed by Socrates in one of Plato’s dialogues.

By way of an example, Akyol said to consider the sixth of the Ten Commandments: “Thou shalt not kill.”

The Euthyphro dilemma, according to Akyol, asks if killing became morally wrong because God included it in the Commandments, or if it was already bad, and the Ten Commandments came about as a reminder of that.

“This was a big dilemma for theologians, both in Christianity and Islam,” he said. “In Christianity, it ultimately led to the Divine Command Theory.”

According to Akyol, the Divine Command Theory says that “whatever God does is right, and whatever God bans is wrong.”

“In Islam, (the theory) is represented by Ash’arism,” he said, referencing the theological school of Sunni Islam that employs an orthodox guideline in its teachings.

The problem with thinking in such a binary way, according to Akyol, is that it “doesn’t leave much room to discuss the problem of evil.”

“The solution from (the Ash’ari) perspective is: ‘Whatever God is doing is good, so why are you even asking?’ That is a roadblock on moral reasoning,” he said.

While Akyol questions the moral frameworks of Islam and their social consequences in his books and lectures, he said he hopes attendees of his Interfaith Friday lecture will understand that Islam, Christianity and Judaism are fundamentally similar religions.

“They’re all different forms of Abrahamic monotheism,” he said. “That’s why the same theological questions that have been asked throughout history have bothered Muslims, Christians and Jews alike.”

In the 20th century, however, Akyol said the politics of modern life drive adherents to these religions apart — even though he said they have more in common than they might realize.

“The Israeli-Palestinian conflict, for instance, makes a lot of Muslims and Jews think that there’s a big rift between us,” he said. “That’s a political issue. There’s a world of faith and belief that should not be boiled down to politics.”