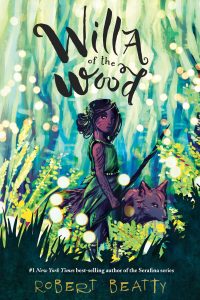 Week Three of Chautauqua Institution’s 2019 season, “A Planet in Balance: A Week in Partnership with National Geographic Society,” hones in on possible solutions to a changing world. In the midst of environmental discussions, this week’s CLSC Young Readers will focus on Willa of the Wood, exploring a new perspective on conservation and natural relationships.

Written by Robert Beatty, Willa of the Wood is a moving tale about how relationships with nature can be more complex than people think. The CLSC Young Readers program will be held at 12:30 p.m. today, July 9, at the Children’s School’s Jessica Trapasso Pavilion, led by Meghan Collins, who develops and manages STEM education programs at the Desert Research Institute in Reno, Nevada.

When searching for this week’s selection, Manager of Community Education Karen Schiavone said she wanted a book to complement the Week Three theme, and one with “a more subtle environmental message.”

“When I found Willa, it was at first just a really heartwarming story about a young girl’s struggles, as her entire worldview was challenged,” Schiavone said. “But when you start to dig a little deeper, there’s a lot in there about how we use the land, how we cultivate, how we build and how we return resources to the land.”

In the Great Smoky Mountains in the year 1900, protagonist Willa and her clan of Faeran people — the nymphs of the woods — live in harmony with nature.

Though humans, or “day-folk,” have cleared forests in the Great Smoky Mountains to cultivate farmland for years, Willa and her people face escalating threats from the day-folk, who continue to clear trees for development, agriculture and the construction of a railroad, destroying Faeran homes and shifting their traditional territory.

With resources waning, the Faeran people sneak into the night to steal what they need from day-folk, and Willa is the best thief of the clan.

Willa of the Wood also depicts Native American tribes living in the Great Smoky Mountains area in the 20th century, including the Cherokee tribe. The Cherokee people, with whom the Faerans have always lived in harmony, are pushed to near extinction, forcing the Cherokee and Faeran peoples to live at the edge of the forest.

Willa begins to feel isolated after learning about older traditions from her grandmother — traditions the Faeran people can no longer proudly proclaim, as clan society evolves around her. The Faeran leader, known as the Padaran, does not allow Faerans to speak their old language.

After being warned never to interact with day-folk, Willa sees a man struggle with his machinery and break down into tears. The two share a tense moment, and the man just watches her, defying the brutal nature of day-folk she had been taught. Running back into the woods and watching from afar again, Willa becomes even more confused about what to believe.

Toward the end of the story, Willa begins to reconsider her loyalty; she asks herself if her loyalty is to the new culture of the Padaran, who fight and steal to survive, or the harmonious life with nature that once led the Faeran people to flourish.

Willa eventually realizes there are different paths in life, and that no one path can be right or wrong.

By not shying away from more adult themes like death and fighting, Beatty invites readers into a more mature world.

Willa of the Wood teaches about what it can mean to live in cohesion with nature and across cultures, and asks readers to consider the role of tradition in an ever-changing world.

“I love this story; it had me drawn in from pretty much the moment I picked it up,” Schiavone said. “It’s a balancing act: Yes, we take from the land what we need, but there are ways we can also give back. At the end of the day, it’s a good message to pass on to young readers.”