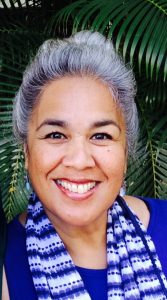 When J. Ekela Kaniaupio-Crozier was growing up, her grandmother gave her a gift she would treasure for the rest of her life. Years later, Kaniaupio-Crozier is taking that gift — her native language — and sharing it with the world.

In keeping with the Week Five theme, “The Life of the Spoken Word,” Kaniaupio-Crozier, a Hawaiian language expert who works with the Kamehameha Schools as a Learning Designer and Facilitator, will talk about the cultural importance of language and how technology can help in preserving it during the 10:45 a.m. lecture Thursday, July 25 in the Amphitheater.

“As we looked at various ways to explore the larger theme of ‘Life of the Spoken Word,’ we learned of Ekela’s decades-long work of making ‘Ōlelo Hawai‘i more accessible, now with the added tool of technology,” said Matt Ewalt, vice president and Emily and Richard Smucker Chair for Education.

Kaniaupio-Crozier has spent the last 40 years working to make Hawaiian language and culture reach beyond her home state.

“Language is such a driver for people to recognize the heart of a culture; they begin to have an empathy for our people, just because the language has been shared,” said Kaniaupio-Crozier, who helped the language learning app and website Duolingo develop its ‘Ōlelo Hawai‘i curriculum. “The more and more we share on whatever platform, more opportunity we have to share our culture.”

Kaniaupio-Crozier believes that with technology comes a promise of wider reach and an opportunity to influence the world.

“This is a story of keeping spoken language alive, language that’s use was banned in public schools by the U.S. government and, if not for the commitment of Ekela and many others, may otherwise have vanished altogether,” Ewalt said.

The mandated use of English language that came with the overthrow of the Kingdom of Hawaii by the U.S. government at the end of the 19th century, pushed the native Hawaiian language to the point of extinction. For Kaniaupio-Crozier, this knowledge came packed in stories that her grandmother relayed from her experiences.

“She told me about being beaten in school for speaking Hawaiian,” she said.

The language, as it is known today, rose out of the Hawaiian Renaissance, a cultural movement inspired by the Civil Rights Movement that swept through the state in the 1960s. The Hawaiian Renaissance was an organized effort by teachers and community leaders who mobilized community elders to pour in their knowledge to rebuild the Hawaiian vocabulary, which was further strengthened by old newspapers and written records.

According to UNESCO, the Hawaiian language is still critically endangered, but it has risen from the ashes to become a living and thriving language. The growing number of Hawaiian language education options at primary and secondary school levels, in college, and the motivation to speak it at home, is giving rise to a generation of second-language speakers.

The Duolingo curriculum that Kaniaupio-Crozier helped design is a step closer to the goal of keeping the Hawaiian language alive by making it accessible to whoever wants to learn and use it. To her, preserving a language “preserves who we are.”

“I didn’t choose it, it chose me,” she said about her connection to the Hawaiian language.

That connection, Kaniaupio-Crozier, said, has been instilled in her own children, who she described as having a “different world view” in that they are more aware of people’s differences and similarities, and have a sense of respect for everyone’s beliefs.

“(The Hawaiian language instills in us) a deep seated Aloha for the land that others may not understand,” she said.

Tags : “The Life of the Spoken Word”AmphitheaterKamehameha Schools as a Learning Designer and Facilitatorlecturemorning lectureMorning Lecture PreviewWeek Five
previous article 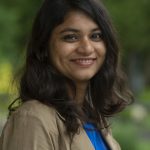 A development communicator and visual storyteller from India, Vishakha Gupta is studying documentary filmmaking at UC Berkeley’s Graduate School of Journalism. Vishakha is a history buff and loves to travel. As a photographer for the Daily, she is looking forward to feeding her love of art and culture.