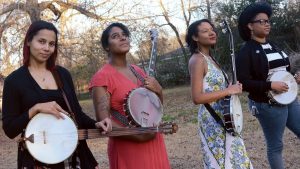 The first time Amythyst Kiah heard a black person playing the banjo, she was listening to Rhiannon Giddens perform with her band, Carolina Chocolate Drops.

Ten years after picking up the instrument, Kiah joins Giddens on tour as one-fourth of the Americana folk group, Our Native Daughters.

“It’s a huge deal because this is a person I looked up to,” Kiah said. “To have been following her career for so long and to actually work with (her) has been pretty amazing.”

The quartet formed in 2018, when Giddens invited Kiah, Allison Russell and Leyla McCalla — all banjo-playing, multi-instrumentalist women of color with backgrounds in blues and folk — to collaborate on the record.

The album explores themes of inherited trauma and the legacy of slavery in North America, specifically from the perspectives of black women.

“Songs covers the peril of the transatlantic slave trade, working through that struggle of coming out of bondage and then … no longer being in chains (but) still having this crushing societal oppression because of your ancestral past,” Kiah said.

Kiah said Songs also carries a message of “hope for the future.”

“(It’s about) seeing … that black people can overcome some of these societal pressures and expectations, and also seeing other people rallying who want equality for all,” she said. “It will be an emotional rollercoaster to say the least — for everyone involved.”

The banjo is featured prominently on the album. Kiah said another central theme of the project is reframing popular conceptions about the instrument.

“The banjo has been synonymous with bluegrass music, with white (musicians), and it’s associated with a certain kind of music and a certain demographic,” she said. “(But) its roots are spread out more firmly than that.”

She said her favorite part of creating Songs was collaborating with three other musicians who could relate to her experience as a woman of color in the Americana music industry.

“To sit down and have that moment of, ‘I 100% understand your experience and what you’ve gone through,’ … is priceless,” Kiah said. “And it’s something that I think a lot of (white) people in Americana probably take for granted.”

Our Native Daughters’ tour around the East Coast, which started Tuesday, is the first time all four members have performed together since recording the album last year.

“We can finally have that live face-to-face engagement with the audience, and really see and feel their response as we go through the songs,” Kiah said. “That’s really exciting for me to be able to share that.”

She hopes Songs of Our Native Daughters can be a vehicle for conversations about racism and inequality in 21st-century America.

“We have a hard time talking about racial issues because people either get so upset they don’t want to talk about it, or people get defensive,” Kiah said. “So through our music we’re hoping the conversation can be had, because … that’s going to be the only way to move forward.”