When marriage counselor Jim Walkup wrote an article for his website titled, “12 Topics You MUST Discuss Before Getting Married,” he didn’t expect it to lead to a book deal. Hundreds of thousands of shares later, he was approached by Althea Press to put his more than 40 years of experience as a licensed marriage and family therapist to paper.

“It was a delight to try to make a difference in helping couples figure out how to get into the right habits and build a relationship for a lifetime,” he said.

Walkup will be holding a talk and signing for his new book, I Do! A Marriage Workbook for Engaged Couples, at 1 p.m. Sunday, July 14 in Smith Memorial Library.

The book includes seven chapters of exercises designed to give engaged couples a more in-depth understanding of one another.

During his talk, he will discuss the habits that lead to strong relationships, such as the importance of love languages. 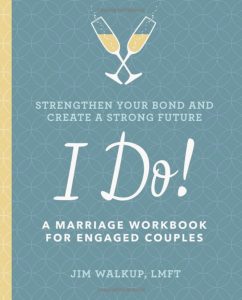 Walkup said his talk is fitting for Week Four’s theme, “The New Map of Life: How Longer Lives are Changing the World — In Collaboration with Stanford Center for Longevity.”

“Since the topic of the week is on longevity and lifespan, I would raise the question: Do marriages make you live longer?” he said, “I have some scientific research (on) that.”

Walkup credits his wife for helping him get through the whirlwind process of turning his marriage counseling experience and advice into a book.

“(She) was the wind behind the sails that said, ‘I want you to get this legacy to happen and pass on this good stuff that you have,’ ” he said. “So that was incredible support.”

Walkup’s wife introduced him to Chautauqua Institution near the beginning of their marriage and the two have been visiting ever since.

“I think Chautauqua is such a special place,” he said.

He hopes his talk can be beneficial to Chautauquans in all stages of relationships.