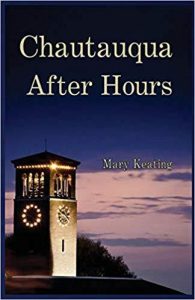 Mary Keating has been visiting Chautauqua Institution all her life, so when she decided to write a story set in modern-day Chautauqua, she drew inspiration from the Institution of her memories — among other things.

“A writer gets ideas from everywhere,” she said.

Keating also cited Rodgers and Hammerstein, the Chinese Zodiac calendar, and a talk she heard programmed by the African American Heritage House as sources of inspiration.

“I took all those facts and thoughts and threw it all away and put it back together and wrote the story,” she said.

The book follows Maggie Michaels Wood, a 60-year-old, longtime Chautauquan in a dissatisfying marriage who falls in love with Paul Rains, an actor performing at the Institution.

Although most of the plot takes place in real settings around Chautauqua, Keating had her characters congregate at the fictional Backstage Café, a restaurant across from the Amphitheater.

She said that in the ’60s and ’70s there was a café there called the Ithaca Coffeehouse where Chautauquans used to gather after evening entertainment.

She describes her main character as a “complicated” and “courageous” woman who learns how to trust her gut while navigating a new stage of life.

Some of the book’s conflict comes from friction between the majority-white Chautauquans and the theater troupe, who are all people of color.

Fictional or real-life aside, Keating she said she thinks Chautauquans need to work toward creating a more inclusive atmosphere.

“We have to learn to open our gate to a stranger,” she said. “All strangers.”

Keating is truly a lifelong Chautauquan; her family bought a house on the grounds in 1964, and her father worked as a gate manager in the ’80s and ’90s. She hopes her book can resonate with new and old Chautauquans alike.

“It’s exciting to be able to talk with people, whether they’re new Chautauquans or generational Chautauquans, about a place we all love,” Keating said.