Tale of Two Jons: Manasse and Nakamatsu to Play Clarinet and Piano Duo 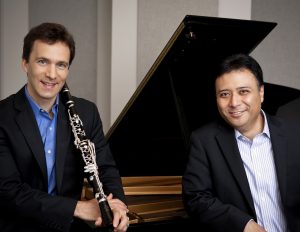 This weekend, two Jons will come together for an evening of lively and varied chamber music rooted in Romanticism, jazz and ragtime.

At 4 p.m. Saturday, July 27 in Elizabeth S. Lenna Hall, clarinetist Jon Manasse and pianist Jon Nakamatsu will perform several pieces as a piano and clarinet duo, some of which were originally composed specifically for them. This is the fifth recital in the Chautauqua Chamber Music Resident Artist Series; so far this summer, this series has seen pianists play alongside string instruments and has featured several all-string ensembles — but this piano and clarinet combination will be something new.

“I think that those two instruments and the combination of their sounds really illustrate the broad vocabulary of the clarinet, and even of the piano, to a certain extent,” Nakamatsu said.

Nakamatsu and Manasse met through a mutual manager who thought they would work well together, and upon first performing together found that they clicked with each other musically in an intuitive way they had rarely found with other performers. Since then, they have played and toured together for 15 years.

“From the very first note we ever played together, it was something extraordinary for both of us,” Nakamatsu said. “I don’t think I’ve ever played with anyone, and as often, with whom I feel this type of almost uncanny common sense.”

The two attribute their ability to collaborate so well to their shared musical aesthetic and an easy communication that can be done without words and even without rehearsal.

“I guess the closest thing is some sort of telepathy,” Manasse said. “When we play together, there is some intuitive sense of each other where the musical connection is seamless. … We just sort of honor it as another entity.”

The first piece on the program is Johannes Brahms’ Clarinet Sonata No. 1 in F Minor, Op. 120. It has four movements, each of which has its own distinct mood. The first is somber, the second is reminiscent of a love song, the third has the feel of a dance piece and the fourth is upbeat and exciting.

Brahms came out of retirement to write this piece, struck by inspiration after hearing clarinetist Richard Mühlfeld play. Composed near the end of his life, the work — which is dedicated to Mühlfeld — is often rather melancholy, but it still has many moments of hope and warmth.

“(It) resonated from a really honest, deep, emotional space,” Manasse said. “It’s as true as any music could possibly be to the composer.”

Next, the duo will play Leonard Bernstein’s Sonata for Clarinet and Piano. Whereas Brahms wrote his clarinet and piano sonata at the end of his career, Bernstein wrote this one at the beginning of his; it is his very first published work. Two movements long, the piece has jazz elements and markers of Bernstein’s style that audibly foreshadow the music of West Side Story that Bernstein would write around 15 years later.

The Bernstein piece will be followed by two of Gordon Goodwin’s “Four Views (for clarinet and piano),” which was originally composed for Manasse and Nakamatsu. The two commissioned Goodwin, a Hollywood composer who has worked on the scores for films like “The Incredibles” and “National Treasure,” because of how imaginative and fun they found his work to be. Nakamatsu and Manasse will be playing two of the four “views” — one slow and one fast.

“They’re not named, so you’re kind of left to create your own vignette from listening to it, but they’re short and fun,” Nakamatsu said.

To finish the recital, the two will play another commissioned piece by John Novacek, called “Four Rags for Two Jons.” The rags are energetic and complex, with an improvisatory jazz sound typical of the ragtime style. The piece is a significant technical challenge to the performers, but it is also good-humored and fun.

Both Manasse and Nakamatsu are here for a limited time as School of Music faculty, and Nakamatsu will also be giving a public piano master class to Piano Program students at 2 p.m. Monday in Sherwood-Marsh Studios.