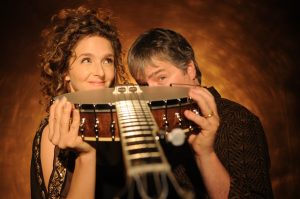 Béla Fleck maintains there’s a distinct difference between being active in music and being “all fired up.” The guitar sparked his interest, “but when I got my banjo, I got all fired up,” Fleck said.

Dubbed the “king and queen of banjo” by Paste magazine in 2015, Fleck and Abigail Washburn return to Chautauqua at 8:15 p.m. tonight in the Amphitheater, as part of the husband-and-wife duo’s two-week summer tour of the northeastern United States. All net proceeds from merchandise sales at tonight’s concert will benefit Chautauqua Institution Arts Education programs.

Fleck last performed at the Institution in 2017, co-headlining an Amp performance with his band, Béla Fleck and the Flecktones and the Chick Corea Elektric Band. And in 2015, Fleck and Washburn shared the Amp stage with the Punch Brothers.

“Béla and I definitely have a bond, other than our marriage, that probably even started with the banjo and our love for it,” Washburn said. “We come from very different styles of playing the banjo, but one thing we decided right at the beginning when we started making our first record together, six years ago now, we decided that the banjo is enough, that we both are in love with the way the banjo sounds and that we want to share that with the world.”

Though Our Native Daughters members — Rhiannon Giddens, Amythyst Kiah, Leyla McCalla and Allison Russell — are not scheduled to perform with Fleck and Washburn tonight, Washburn said she and Fleck share a deep history with Giddens, who is a “dear friend,” and have built connections with Kiah, McCalla and Russell as well. During Washburn’s years with Uncle Earl and Giddens’ time with the Carolina Chocolate Drops, the two would often find themselves in the same places. Similarly, Fleck said the Flecktones would often tour with the Carolina Chocolate Drops.

“Rhiannon and I keep threatening to do something together,” Washburn said. “I know it will happen someday, and it’ll be a neat thing.”

Washburn described her and Fleck’s 2015 Chautauqua performance as a “dream gig,” and said she considers tonight’s performance a highlight of their tour. The duo will perform selections from their 2014 debut album, Béla Fleck & Abigail Washburn, their 2017 record, Echo in the Valley, as well as pieces that may be unfamiliar to the Chautauqua audience.

“I find it deeply fulfilling and meaningful that I get to look at the world around me and feel the things inside of me that have made me who I am,” Washburn said. “Then I can piece it all together — in one way or another — and sew these tapestries of sound that I get to share with people. Those tapestries help us understand each other and connect and process the world that we live in and bring, hopefully, more beauty to how we live our days.”

Such “tapestries of sound” are woven by the duo’s richly blended playing — a combination of Washburn’s African clawhammer style of banjo playing and Fleck’s more contemporary pluck.

“We had to figure out right away how we were going to make the sound of two banjos and a voice enough,” Washburn said.

In all professional endeavors — whether creating music with Washburn, the Flecktones, The Sparrow Quartet or New Grass Revival — Fleck said he tries to be as honest in his music as he can.

“It’s not about how I can get as many marbles out of the game before people stop coming to the shows,” Fleck said. “It’s about presenting an honest picture of my musical perception of the world and what I can do with it, what I can create with it.”

For the banjo skeptic, Washburn said its sound is “warm and intimate,” and Fleck concurred.

“If you’re afraid of the banjo, and you’re not sure you’ll like it, give it a shot,” Fleck said. “If you don’t like this show, then you don’t ever have to go to another banjo show again.”