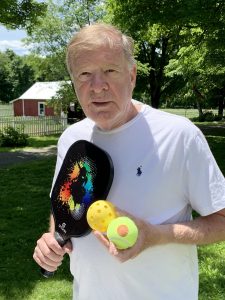 As he got older, longtime Chautauquan Yarmon Ariely’s love for tennis never faded, but his ability to run across the courts did. Then, in the middle of a game, a new sport came to him: Beckyball.

At 5 p.m. today, August 1, at the Chautauqua Tennis Center, Ariely will host a preview of his new sport, Beckyball. The preview is free and open to all of the Chautauqua community. The game is a mix of two popular, existing games — pickleball and tennis — and is intended for an older audience.

Beckyball is played on soft tennis courts, and in only adding one line — the kitchen line, 7 feet away from the net — any tennis court can become a Beckyball court.

This is a large draw-in of Beckyball as well: Without the need for a new court, players can go to existing tennis courts to play.

Ariely said this mix was perfect because it allowed aging lovers of both sports to be able to play on soft courts, without needing to pave new ones.

“The greatest advantage of Beckyball is to play a sport like pickleball on soft courts,” Ariely said. “There are no other sports that allow people who can’t play tennis anymore and want to play something softer, easier on the soft court. This is the only alternative for people who are older and suffer from aching joints, like me, and want to have a sports activity on a more forgiving court.”

Ariely, who created the game himself earlier this year, said Beckyball is catching on in his hometown area of St. Petersburg, Florida.

“I made it from top to bottom; everything about it I created, and its first public demonstration was in January of this year,” he said. “So, it’s relatively new, but it’s already catching like wildfire.”

Ariely believes the growth of Beckyball is due to the social nature of pickleball, and that the game has come a long way and will be a good addition to the sports catalogue of Chautauqua.