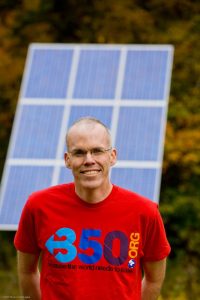 This morning, environmental activist and author Bill McKibben will be on the Amphitheater stage. One week ago, he spent a few hours in jail.

McKibben was participating in a peaceful protest against the immigrant detention centers on the southern border outside U.S. Representative Elise Stefanik’s office in Glen Falls, New York, last Thursday.

He and five others went into the representative’s office and said they would stay until they could talk to the congresswoman, who an aide said was unavailable. The congresswoman’s staff called the police, and McKibben and his fellow protesters were arrested and charged with criminal trespass.

This was McKibben’s seventh or eighth arrest, he said. It is a frequent enough occurrence for him that he cannot remember the exact number off-hand, but nonetheless, it is an experience that he still finds alarming.

“It’s always a little scary,” he said. “If a policeman tells you to do something, the correct instinct is to do it. That’s how societies work best. You have laws, people follow them. But on occasion, history indicates you need to think otherwise and do otherwise.”

McKibben will speak at 10:45 a.m. Thursday, August 15 in the Amphitheater, as part of Week Eight, “Shifting Global Power.” He is the founder of 350.org, an international organization that encourages the use of renewable energy and divestment from the fossil fuel industry through political action and grassroots organizing.

This dangerous level is what drives climate change. This global phenomenon is forcing people to flee their homes to find more hospitable environments.

“Changes in the climate are now fueling dramatic increases in migration around the world,” McKibben said. “When it gets too hot or too dry to grow food, people are going to leave.”

A 2015 study by the Institute for Environment and Human Security of the United Nations University found that forecasts of the number of environmental migrants by 2050 range from 25 million to 1 billion, with 200 million being the most widely cited estimate.

“Even if it wasn’t cold and cruel, there just aren’t enough cages you can put people in,” McKibben said.

McKibben started out his career as a journalist. He wrote a long-form piece about climate change for The New Yorker, which turned into his first book, The End of Nature, published in 1989, and largely considered the first book on climate change written for a general audience.

“I just knew it was the biggest story in the world,” he said.

Since then, McKibben has written nearly 20 books on the environment, climate, media and culture. He has also become an active political protester. For example, in 2006, he led a five-day walk across Vermont, where he lives, to raise awareness and call for climate change action. The next year, he initiated the Step It Up 2007 campaign, which sparked hundreds of rallies across the United States to demand Congress curb carbon dioxide emissions by 80% by 2050.

McKibben said he has noticed a change in the willingness of people to embrace action on climate change over the past few decades.

“What’s interesting is right at the beginning, when we were first learning about climate change, people were pretty open to the idea of doing something,” he said. “Within a couple of years, the fossil fuel industry had mobilized and begun what’s been this 30-year propaganda effort to keep us from doing anything.”

In 2016, Massachusetts Attorney General Maura Healey filed a suit that accused Exxon Mobil of violating state consumer protection rules and misleading investors about the impacts of fossil fuels on climate change. In January, the U.S. Supreme Court declined to hear Exxon’s appeal to block the release of records on its knowledge of the effect of burning fossil fuels on the climate.

Now, there are more droughts and floods because of climate change, McKibben said.

“We’ll see a lot more of these things, and they’ll begin to build on each other and create more crises,” he said.

He cited a devastating drought in Syria that caused 75% of Syria’s farms to fail, and 85% of livestock to die between 2006 and 2011, according to the United Nations. During this natural disaster, 1.5 million Syrians migrated to cities, which escalated conflict that led to war, and has since precipitated a mass migration of Syrian refugees into Europe.

“There’s nothing theoretical about what’s going on,” McKibben said. “Now, anybody with a TV can see the floods and the fires and the famines. And that’s why people are becoming more and more engaged and angry and active.”

At his talk, McKibben will encourage people to get involved in speaking out against the fossil fuel industry. He will also invite Chautauquans to participate in the Global Climate Strike this September, which is being organized by Swedish activist Greta Thunberg.

“There’s a lot of things we can do as individuals, and most people know what those are,” he said. “Truthfully, the most important thing an individual can do is become a little less of an individual and join a movement.”