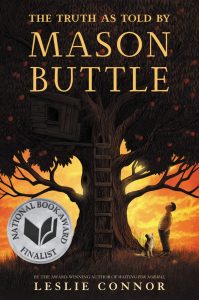 Grace in the face of adversity is a hard perspective to develop, but Mason Buttle figures out he already has the perspective.

At 12:30 p.m. today, August 7, at the Jessica Trapasso Memorial Pavilion at Children’s School, CLSC Young Readers will gather to discuss a modern classic from award-winning author Leslie Connor, The Truth as Told by Mason Buttle, which was a 2018 finalist for the National Book Award for Young People’s Literature. The story coincides with the Week Seven theme, “Grace: A Celebration of Extraordinary Gifts.” The ideas of hope and grace in times of trouble resound throughout the book.

Narrated by Mason Buttle, the book opens with his shirt being removed from a locker after “STOOPID” was written across it by a bully. Mason is a seventh grader, the largest and most developed child in his grade, who barely has the ability to read or write. Mason is relentlessly bullied throughout his upbringing, but his grief is an even bigger issue.

Fifteen months earlier, Mason’s best friend, Benny Kilmartin, was found dead on the Buttle family farm. As Mason tried to explain what he knows to police Lt. Baird, Baird believes that Mason is not telling the full truth.

Moving to the present day, Mason makes a new friend, a tiny boy named Calvin Chumsky, who seems to bring out the best in Mason. To escape the bullying, the two create their own underground hideout, but after Calvin disappears too, Mason worries if anyone will believe him this time, either.

Writing the narrative from Mason’s perspective, Connor ties together the sentences in a way that allows for a fluid read that still feels like it could have been written by the main character himself. Even in the first chapter, readers can understand the emotion behind every word.

Karen Schiavone, manager of community education, said The Truth as Told by Mason Buttle is one of her favorite CLSC Young Readers texts this season. Schiavone said the book’s ability to speak to younger audiences, while appealing to older readers, is why she believes it’s so important.

“We have started including some that would be considered more ‘young adult,’ and I’ve intentionally tried to do that,” Schiavone said. “We do have a gap between the traditional young readers audience and the traditional CLSC audience. So, by starting to include some more young adult age titles, we can start to meet that gap.”

Sounds of the ’60s: With Skiffle Band, CTC’s ‘One Man’ Takes Audiences on Upbeat and Musical Adventure