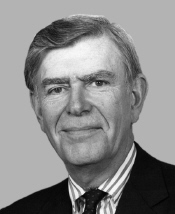 At the crux of Congressional unrest, according to former U.S. Rep. William Clinger, is a rather mundane term:  extreme partisan gerrymandering.

The former representative from Pennsylvania’s 5th and 23rd Districts will lecture and call for a “we the people” uprising against state legislatures’ use of the centuries-old tactic at 3:30 p.m. today, August 5, in the Hall of Philosophy.

Gerrymandering involves electoral redistricting for political interest or gain. State districts are redrawn every 10 years, following the U.S. national census, and must be continuous and of equal population — or nearly equal. Often, this results in convoluted, winding district maps.

One-party controlled states are in a strong position to gerrymander district boundaries to monopolize state legislatures and congressional representation for several decades, Clinger said. Consequently, congresspeople fall on the polar outskirts of the political spectrum.

In 2017, Clinger was one of a handful of leading Republicans to sign “friend-of-the-court” briefs urging the U.S. Supreme Court to limit extreme partisan gerrymandering. Signatories were largely concerned about state partisan gerrymandering, particularly Wisconsin’s 2011 redistricting plan, which was deemed unconstitutional by a U.S. District Court in Wisconsin in November 2016, in the landmark Gill vs. Whitford case.

The Wisconsin legislature filed an appeal in February 2017, to the Supreme Court, which was dismissed in June of that year for lack of standing and remanded to Wisconsin District Court. The case was dismissed after the Supreme Court ruled in June 2019, that cases of partisan gerrymandering in Maryland and North Carolina — and subsequently pending litigations in other states — are nonjusticiable, meaning they presented political questions beyond the scope of the apolitical federal court system.

“We have no commission to allocate political power and influence in the absence of a constitutional directive or legal standards to guide us in the exercise of such authority,” Chief Justice John Roberts said for the 5-4 majority in the North Carolina and Maryland suits.

Because judicial intervention is unattainable, Clinger said, it is up to the pressure of the people to persuade state legislatures to abandon gerrymandering.

“A real reform to restore Congress as a separate and equal branch of government can only occur when congressional elections are fair fights and not rigged blowouts,” Clinger said. “That can only happen if we can get rid of gerrymandering, which means we the people get engaged.”