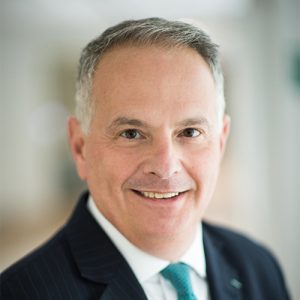 In a week centered on evolving global power and its new stakeholders, Kenneth Weinstein will explore the intersection of international authority, national security and technology.

The president and CEO of Hudson Institute, the Washington D.C.-based conservative think tank, Weinstein will lecture on “National Security and Next Generation Technology” at 10:45 a.m. today in the Amphitheater, continuing Week Eight, “Shifting Global Power.”

“Our work is focused at the intersection of technology, strategy and policy: strengthening the U.S. nuclear posture; protecting intellectual property and critical technologies; and ensuring American leadership in the development of 5G capabilities, cyber defenses and quantum computing,” Weinstein wrote in the nonprofit’s 2018 Annual Report.

Weinstein is a political theorist by training and has established a reputation as a thought and opinion leader on international affairs, writing for major publications in the United States, Europe and Asia.

Weinstein and Hudson Institute have been particularly outspoken about foreign cyberattacks on U.S. agencies and elections, especially within the last year after revelations that Russians interfered in the 2016 presidential election, attempting to bolster then-candidate Donald Trump’s campaign. Hudson Institute has also been critical of Russia and the threat it poses to international security.

“President Vladimir Putin seems to be relishing the role of international troublemaker,” Weinstein wrote in a 2018 column published in The Wall Street Journal about an alleged attempted Russian cyberattack on Hudson Institute’s website. “My colleagues have been promoting tough-minded policies in all these areas and others.”

In the same stroke, Weinstein praised efforts by the Trump’s Administration, writing that “… the Trump administration has rightly adopted aggressive policies to address the renewed threat Russia poses to U.S. national interests, to European and other allies, and to regional stability.”

Weinstein has also commended Trump’s positions on security policy in Asia, writing in The Wall Street Journal that “… the overarching goal is managing Asia policy in a way that enhances the security and prosperity of the U.S. and its allies. … But at least when it comes to security policy, the president has his priorities straight.”

As the president and CEO of Hudson Institute, Weinstein oversees the nonprofit’s research, management of external affairs, marketing and government relations efforts.

Weinstein,  whose academic work focused on the early Enlightenment,  was decorated with knighthood in arts and letters by the French government, and co-edited The Essential Herman Kahn: In Defense of Thinking. Weinstein was nominated by President Barack Obama to serve on the Broadcasting Board of Governors — now known as the U.S. Agency for Global Media — and serves on additional international humanities and trade committees.