Logan Schulman wants you to destroy his art installation. Or not — it’s really up to you.

On a small table to the side sits a pair of safety goggles, work gloves, a mallet and a metal baseball bat.

A cellphone on a tripod stands a few feet away.

During the School of Art’s last open studio on Saturday, two Chautauquans respectfully observed the various vases and bowls, stepping around the shards on the floor.

Schulman approached them as they walked back toward the School of Art.

“I’m glad you went into the installation,” he said. “You know, you’re welcome to break something if you want.”

“That’s alright, I’m more into putting together,” a Chautauquan replied.

“Well, there’s a broom down there if anybody is feeling so inclined as to tidy a space,” Schulman said. “Really the piece is interested in how people engage, so the fact that you just went down and looked at stuff is perfect.”

Schulman is a student and emerging artist at the School of Art. Prior to coming to Chautauqua, he studied at New College of Florida in Sarasota. This season he has been focusing on integrating mixed-media visual arts into his performance art pieces.

He designed this installation with Chip McCall, the School of Art manager.

For the institution, titled “Yard (lawn),” McCall and Schulman said they intentionally used items like the drop cloths and tarp that are typically utilized only in the making of art.

“People will be like, ‘That silly thing?’ Which is kind of the idea,” McCall said. “It’s supposed to look sort of non-artist and industrial.”

The idea is simple: Within the confines of the installation’s three walls, participants are free to experiment with the space. This includes, if they desire, smashing pottery (provided they wear the included safety gear).

Schulman and McCall plan to leave the installation up until the School of Art officially concludes its season on Friday, and said that as long as there are pieces on display, anyone is welcome to participate.

This hinges on their rapidly depleting supply of ceramics — which Schulman collected from consignment shops and donations and spray-painted orange. 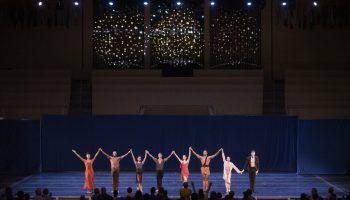