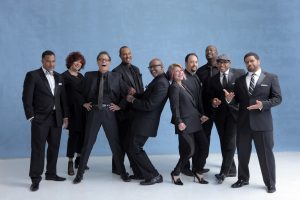 In the cornhusker state, madness was born.

“Vocal harmony madness,” Claude McKnight, founding member of Take 6, said when describing the collaboration. “We use madness in the greatest of terms.”

With 20 Grammy Awards between the two iconic ensembles, the groups boast a range of musical styles from jazz to swing, gospel to rhythm and blues. The Manhattan Transfer brings its 47-year legacy as one of the preeminent vocal groups in the world, while Take 6 delivers breathtaking harmonies, innovative arrangements, funky grooves and a cappella flare.

The Manhattan Transfer is comprised of four members — Alan Paul, Janis Siegel, Cheryl Bentyne and Trist Curless; it was founded in 1969 by doo-wop legend Tim Hauser and the quartet’s four original members. Since then, the group has won 10 Grammy Awards, including for best jazz vocal performance, duo or group four times; The Manhattan Transfer was inducted into the Vocal Group Hall of Fame in 1988.

McKnight, Mark Kibble, Joel Kibble, Dave Thomas, Alvin Chea and Khristian Dentley make up the 10-time Grammy Award-winning Take 6. American record producer Quincy Jones heralded Take 6 as the “baddest vocal cats on the planet,” according to a 2006 NPR article.  The Manhattan Transfer and Take 6 have been performing together as The Summit since 2015, after their joint manager suggested they get together.

“I think with vocal music, one of the things that’s very important for the performer is to radiate,” McKnight said. “The more energy that’s exchanged (with the audience), the higher the caliber. We have fun with each other.”

While trying not to spoil the night’s spectacle, McKnight alluded to a vocal battle and a group-member crossover. This performance is unlike other music co-bills, according to Ed Keane Associates, the groups’ management company.

“(They) were not content to sing a set and simply join each other for a finale,” the company said in a statement. “They have created musical moments on-stage — singing and performing nearly a dozen songs together — during this show. You will experience the creativity, excitement and renowned performances that only two phenomenal groups can bring to one stage, in the moment.”