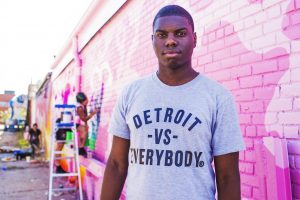 In the city of Detroit there’s a young man with a camera. And after a few clicks of that camera and a few hours of uploading, the Detroit public art scene is within reach for both art lovers and curious citizens across the globe.

A few times a week, Viranel Clerard starts his day by photographing works of public art in Detroit, such as murals and sculptures. He said it takes him a couple of days to photograph the art work and about two weeks to complete the research on each piece.

“I go out and I photograph every piece myself,” Clerard said. “I’ve photographed probably about 20 pieces a week.”

Five years ago, Clerard began his online project, The Detroit Museum of Public Art, and he’s documented over one thousand murals and sculptures since.

At 3:30 p.m. today in the Hall of Philosophy, Clerard will discuss the importance of art and the internet, which have been essential to his career, as part of the Oliver Archives Heritage Lecture Series. In his lecture, “Documenting a City: Place Keeping vs. Place Making in Detroit, Michigan,” he will speak about the difference that his project made in his community.

For Clerard, his father is the inspiration for his work.

“My dad came to the country at 25 years old,” Clerard said. “He was extremely poor when he came to the States and a pastor in Detroit sponsored him, teaching him English and how to drive.”

Clerard said his dad ended up living the American dream just five years later, complete with a home and a family. The art scene is a tumultuous career path, yet Clerard looks to his dad’s story of accomplishing the seemingly impossible.

“My father came to the States, which was difficult,” he said. “For me, it’s the same way that I broke out into a world that — also as a person of color — isn’t easily accessible.”

“I knew I wanted to document things,” Clerard said. “So, I had a job as a janitor and I said to myself, ‘If I get this job as a janitor, it will allow me to network and get my foot in the door.’ ”

Within six months, Clerard landed his first front page story that he pitched to the newsroom.

“I worked there for another year,” he said. “But nothing was as sensational as that one, so I said OK, I am going to get a college degree.’ ”

He started off at Washington Community College, and was later accepted to the University of Michigan but “never graduated university,” Clerard said.

He was persuaded by photojournalist David Turnley, who told him to “just go out and do it.”

“I took his advice and thought, ‘Well, I’m going to take the one year that I have to make my decision to commit or not to see if I can make something happen.’ And then I ended up pursuing the Detroit Mural Project,” he said.

“Detroit is making a comeback now,” Clerard said. “There’s a lot of ideas on how to placemake, which is making community spaces to build the community back up ­— public art always plays big roles in cities.”

He said people are drawn to larger cities that have public works of art, like Paris and New York City. Currently, he’s in talks with the Detroit Institute of Arts to see if they will sponsor his project.

Clerard said the internet helped him succeed because his website became popular enough for him to continue his work. He hopes Chautauquans will learn about communities, be inspired and support his project.

“My plan is to, one day, be able to say that I am a young African American man that came from humble beginnings and created infrastructure for the next generation of museums,” Clerard said.