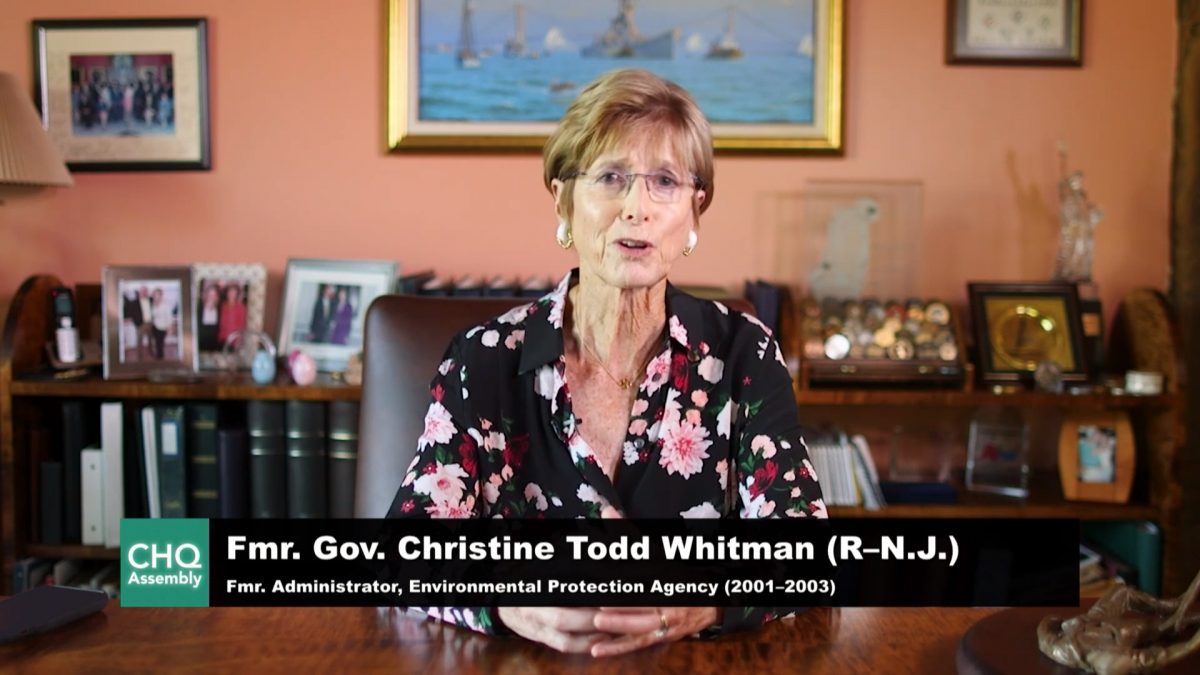 Bipartisan interest — as well as great public demand — in environmental protection spurred the creation of the Environmental Protection Agency in the late 1960s.

“Those were the days,” said Christine Todd Whitman.

Whitman served as the first female governor of New Jersey from 1994 to 2001, and as the administrator of the EPA under George W. Bush from 2001 to 2003. On Monday, June 29, on the CHQ Assembly Video Platform, she kicked off the Chautauqua Lecture Series for the 2020 season with her lecture, “Government, Economics and the Climate,” opening Week One’s theme of “Climate Change: Prioritizing Our Global and Local Response.”

Whitman started her lecture by discussing the history of government action in response to climate change and how the United States went from an agrarian society to an industrial one during the late 1800s and early 1900s. During this time period, there were no regulations on industrialization’s impact on the environment.

Some saw the early signs of environmental damage, like Theodore Roosevelt, but they failed to elevate climate change into the general consciousness until the 1960s. “And,” Whitman said, “it took a woman to do it.”

Whitman detailed Rachel Carson’s Silent Spring and the focus on the threat of overusing pesticides on bird life — and how Carson launched a movement that spurred the government, federal and local, into action. Republicans and Democrats supported the creation of the EPA, and this started the first golden age of environmental protection in the U.S.

Because of the actions of bipartisan lawmakers, and the general public who demanded it, America’s environment is cleaner than what it was 50 years ago, according to Whitman. She said this kind of bipartisan support is needed today.

“It is, frankly, absurd that climate change has become a political battleground,” Whitman said.

She went on to say the fact that humans are accelerating the impacts of climate change is beyond dispute, and that arguing what degree of damage is caused by people, and how much is natural, is beside the point.

“It’s like having a team of ER doctors debating whether a dying patient’s heart attack was caused by his lifestyle or his genetics,” Whitman said. “What’s important at that moment is not the cause; it’s the cure.”

She also said that people cannot depend on governments alone to act, and that each person must do their part. She cited an article on BBC Future detailing studies that found if one person decides to decrease their carbon footprint, others follow.

Whitman then went back to the role the government plays in combating climate change, particularly in terms of the current administration.

“There is no doubt in my mind that the actions of the president and members of his administration have diminished the sense of urgency we need to combat climate change, while also eroding public trust in the value of good, solid science,” Whitman said.

Whitman said these actions include the U.S. pulling out of the Paris Climate Accord and the “scrubbing” of mentions of climate change by the EPA, and the rolling back of vehicle emission standards, as well as many other examples.

“Prudent public policy should always be rooted in unbiased science,” Whitman said. “Science that is bought and paid for by organizations that have a vested interest in the results of a scientific inquiry must be taken with a certain amount of skepticism. It doesn’t matter whether the interest is political or financial.”

While some argue that environmental protection comes at the cost of economic success, Whitman believes the opposite — and cited several statistics. From example, she said, from 1980 to 2017, total emissions of six major air pollutants were reduced by 67% thanks to U.S. laws and regulations. During that same time period, energy consumption increased by 25%, and the U.S. GDP increased by 165%.

Throughout the lecture, Whitman quoted President Abraham Lincoln, who told Congress in 1862, “As our case is new, so we must think anew, and act anew.” She said this saying was especially true during the COVID-19 pandemic. The response to the virus from federal, state and local governments showed that people are capable of responding to a global crisis.

“Now, even as the original (COVID-19) restrictions are being relaxed, most people are still acting prudently to protect themselves and others from the virus,” Whitman said. “Could we not also mobilize a similar effort to build a true consensus around the need for action to meet the threat and the challenges of global climate change?”

Whitman said that people must reach out to their elected officials, hold themselves to the same commitment, stress the importance of objective science and dispel the idea environmental protection means losing economic prosperity.

“We must be willing to think anew and to act anew,” she said. “Only then can we succeed in changing how we think, talk, and act about the compelling need to respond effectively and successfully to global climate change and its threat to our way of life and the life of this planet.”