Many people ask Christiana Figueres     and Tom Rivett-Carnac where they get their energy and optimism.

“Well, we get it from facts, from data that we see,” Figueres said.

Stubborn optimism has practically become their motto – Figueres said it’s not a “naive” optimism, sitting back on the couch and assuming everything is going to be OK, but a “courageous” optimism, rooted in understanding the challenges before them.

“We understand the science, we understand the current trajectories,” Figueres said. “And at the same time, we know that (humanity has) the ingenuity, the capacity, the technological knowledge, the finance, the capital (and) the policies … available to align all of this to make a dramatic difference in the trajectory that we need to set.”

Figueres and Rivett-Carnac are both architects of the 2015 Paris Climate Agreement and authors of The Future We Choose: Surviving the Climate Crisis. Figueres is also a Costa Rican diplomat with 35 years of experience and the former executive secretary of the UN Framework Convention on Climate Change. Both Figueres and Rivett-Carnac spoke on Thursday, July 2, on the CHQ Assembly Virtual Porch, delivering a special presentation for the Chautauqua Lecture Series titled “The State of Global Environmental Action.” This was the fourth program in Week One’s theme of “Climate Change: Prioritizing Our Global and Local Response.”

The conversation started by Rivett-Carnac asking Figueres how COVID-19 changed their work and field.

Figueres said the world is completely different. In the beginning of the pandemic, it was obvious that people would need to change their individual lifestyles, as well as entire industries and governments. They would also have to actively listen to scientists.

Figueres said that while not everyone is universally heeding that advice, most are paying attention to what scientists are saying.

Rivett-Carnac said that 2020 was expected to be a transformative year for climate negotiations, but the pandemic, as well as a recession, have dominated most of the political focus.

The topic turned to economic recovery and how that is tied to sustainability. Rivett-Carnac said that if fiscal stimulus promotes parts of the economy needed to thrive in the future, such as renewable energy, clean infrastructure and new types of transportation, then there will be rapid acceleration to a low-carbon economy.

But, if stimulus packages are distributed without the intent of building back the economy in a greener, better way, then the economy could be locked into current, unsustainable practices.

In their book, Rivett-Carnac and Figueres explore the mindset that people need to have in order to create a positive, thriving world. Figueres detailed how important it is for people to understand, and be open to, regenerating the environment, society, politics and economy — “all of which we have destroyed,” she said. “… (We need) to understand that, yes, we have destroyed it, but we have the capacity and the wherewithal to regenerate all of that. Not only do we have the capacity, frankly, we have the responsibility to do so. And to do so urgently.”

The lecture shifted to a live Q-and-A session between Figueres and Vice President and Emily and Richard Smucker Chair for Education Matt Ewalt, with viewers sending in questions in the chat on the Virtual Porch. One of the first questions from the audience was what the “lowest-hanging fruit” was that a future U.S. administration could address.

Figueres’ answer was energy efficiency. She lived in the U.S. for 20 years and knows that many people like using their air-conditioning to live in cold temperatures.

“Sadly, we should get used to living at, you know, temperatures that are meant for human beings and not just for penguins,” Figueres said.

Figueres once lived in a 60-year-old home while in the United States, and did an energy audit of that house to learn its efficiency.

“At the end (the inspector) said ‘I’m very sorry, did you say that you work on climate change?’ And I said ‘Yeah, that’s that’s what I do.’ And he goes, ‘Well, I have to tell you, I’ve been an energy auditor for 16 years, and I have never seen a house as inefficient as yours,’” Figueres said.

Figueres then invested in insulating her home, and believes that many houses can benefit from using energy more efficiently.

The last question Ewalt asked was what first steps people can take to combat climate change.

Figueres’ first step was simple: a carbon footprint test. The average U.S. citizen’s carbon emission is 20 tons a year compared to 0.1 tons annually per person in India, and 6 tons in European countries. These carbon footprint tests make it easy to see where a person’s largest emissions are and what their largest reduction potential is.

The next step is for people to make a plan to halve their carbon footprint by 2030. She said this is not difficult — everyone tends to underestimate what they can do in the long term, and overestimate the short term.

“Just ask your kids, and they’ll know what you can do to reduce your footprint,” Figueres said. “I bet that most of us can actually get to one-half of our carbon footprint in about three or four years. Forget the 10.” 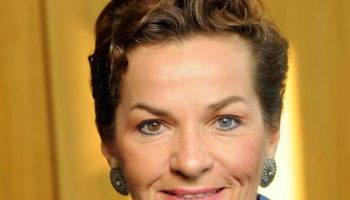