Long before Christiana Figueres spearheaded the 2015 Paris Agreement as U.N. Executive Secretary for the U.N.’s Climate Change Convention, she was a teenager admiring Costa Rica’s endangered golden toad in the Monteverde Cloud Forest. She hoped to bring her kids to see the toad one day.

She never had a chance. Her second daughter was born the same year the last golden toad was seen in 1989.

The rare toad’s extinction shook Figueres into action to reverse humans’ effect on the environment.

“If I have witnessed an extinction in my short lifetime,” Figueres said, then there must be a higher rate of extinction than she initially thought.

Figueres will discuss how the global coronavirus pandemic has compounded the need to address climate change solutions — solutions that are within reach — during a special presentation for the Chautauqua Lecture Series. Titled “The State of Global Environmental Action,” it will be broadcast at 11:30 a.m. EDT on Thursday, July 2, on CHQ Assembly’s Virtual Porch. She will be in conversation with Tom Rivett-Carnac as co-founders of their joint enterprise Global Optimism, which drives civilians and leaders alike to see and act on positive mindsets toward reversing climate change. Rivett-Carnac also served as Figueres’ special advisor while she served as executive secretary.

Both the time and location for the program have changed; according to Vice President and Emily and Richard Smucker Chair for Education Matt Ewalt, this move gives Chautauquans more opportunity to engage with Figueres following her conversation filmed earlier this week with Rivett-Carnac, and accommodates both speakers’ time zones. Figueres is based in Costa Rica and Rivett-Carnac is in London.

Figueres had grown up attending political events with her parents, who were major political leaders in Costa Rica. Her father, three-time President José Figueres Ferrer, served three terms in the presidency while her mother, Karen Olsen Beck, served in the Legislative Assembly and as Costa Rican ambassador to Israel.

Figueres’ own career began in 1982 as minister counselor at the Costa Rican Assembly in Bonne, Germany, thanks to her educational background and ability to speak German. She later moved into the role of director of international cooperation in Costa Rica’s Ministry of Planning, and was named chief of staff to the Minister of Agriculture.

In 1995, she moved to the United States and served in Costa Rica’s climate change negotiating team while founding the nonprofit Center for Sustainable Development of the Americas that same year. She created opportunities for Latin American countries to actively participate in the Climate Change Convention by creating national climate change programs in Guatemala, Panama, Colombia, Argentina, Ecuador, Honduras, El Salvador and the Dominican Republic, while also working to ensure each program’s establishment. She also advised governments and private companies alike on climate-related business decisions.

In 2001, National Geographic magazine awarded her with the Hero for the Planet Award.

In 2010, she was elected Executive Secretary of the United Nations Framework Convention on Climate Change. She led the construction of the first Paris Agreement in 2015, which called for all signing countries to counter the expected 2 degrees Celsius global rise in temperature by reducing emissions in their own countries by 1.5 degrees Celsius.

Figueres’ stamp is still all over the Paris Agreement. “Affordable, scalable solutions are now available to enable countries to leapfrog to cleaner, more resilient economies,” states the United Nations’ description for why the Paris Agreement is still an ongoing priority.

Figueres said these solutions are already in motion.

“The world is decarbonizing,” Figueres said. “This technology is dropping in price without the volatile prices like the gas sector has. It’s so much more user-friendly, it’s less risky and will continue to grow. It’s not going to be stopped by politics.”

The current U.S. administration pulled out of the most recent version of the Paris Agreement in November 2019. To date, the United States is the only country to withdraw from the Paris Agreement. A month prior to the U.S. withdrawal, the BBC reported that the United States and Brazil had pledged a $100m (£80m) biodiversity conservation fund for the Amazon led by the private sector, which was coupled with a prioritized agreement to actually promote private-sector development in the Amazon. At the time this was reported, over 80,000 fires had erupted throughout the Amazon that year.

But Figueres is not worried about any individual country’s politics dragging down global progress.

“You cannot debate science. The only thing that will change is the granularity in science,” Figueres said. Political sway in individual countries like the United States “doesn’t change where we’re heading.”

Figueres did note that parts of the United States still ally with the rest of the world.

“(Within the United States), states, especially in the east and west, truly do understand what’s going on,” Figueres said. “Sixty percent of the U.S. economy continues to decarbonize. The private sector understands that this is a difficulty in the White House, but it is not a permanent feature.”

Figueres said the international community will do whatever it takes to fulfill those needs, and are “borrowing trillions of dollars to make it happen. And these countries have no intention of paying (back the debt). Future generations are going to be saddled with this debt. And if this generation is going to saddle this debt, it better be one that’s worth it for your future.”

This program is made possible by The Walter L. & Martha Tinkham Miller Fund. 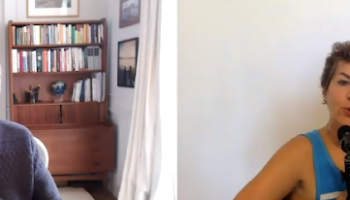