“Once upon a time, African-American history and American history were studied in two seperate stories,” said Martha Jones, the Society of Black Alumni Presidential Professor and Professor of History at Johns Hopkins University.

As an author and educator, Jones has approached the major questions and moments of American history in the shoes of Black people living in that time. In much of her research and writing, this history was looking at voting rights, constitutional amendments, and what it meant to be a citizen of the United States.

Jones’ lecture, “Vanguard: 200 Years of Black Women at the Front of Voting Rights,” Week Five’s presentation in the African American Heritage House lecture series, will premiere on the CHQ Assembly Video Platform at 4 p.m. EDT Thursday, July 30, without a live Q-and-A. A severe thunderstorm and power outage postponed this premiere from July 29.

This lecture is in the spirit of her book, Vanguard: How Black Women Broke Barriers, Won the Vote, and Insisted on Equality for All, which is set for release on Sept. 8, 2020. The book, and the presentation, explores Black women’s efforts toward suffrage as they fought both racism and sexism. Jones began this research as an academic curiosity — but the more she reflected, the personal this story became.

“When I began to be curious about voting rights in African-American women, I realized that I didn’t know the stories of the women in my own family. So, partly I headed to do the research wanting to fill in some blanks (in my family’s history) because I didn’t know where my grandmother, or my great-grandmother had been (in society) in 1920 when the 19th Amendment was ratified,” Jones said. “So, in some ways, my work has oftentimes been inspired by questions that I have in my own family. Unfortunately, because they are no longer there to tell those stories, I had to use my historian tools in order to try and recover them.”

The history spans generations, as the books cover two centuries of Black women’s political activism as it relates to suffrage. Jones said she hopes that her lecture can help the audience trace how historical events impact current political representation.

“The African-American women in the 21st century politics who we easily can identify or recognize — whether it’s in Congress, Kamala Harris, Val Demings, or Ayanna Pressley (or) leaders of political culture (like) Michelle Obama or Stacey Abrams — I really hope that my lecture helps us appreciate the history from which these women have emerged,” Jones said. “These are not women who are direct descendents of the politics of the Women’s Suffrage Association, or the activism of Alice Paul or Carrie Chapman Catt. Instead, they are inheritors of a distinct political tradition forged by Black women over two centuries.”

While the country has gone from withholding women’s right to vote to having Black women in high-ranking electected positions, other things are still in dire need of reform. Jones pointed to voter suppression as a prime example.

“It’s to say that, as was true in the early 19th century, when Black Americans are kept away from the polls by law in many states, state laws appear to conflict even with the spirit of the U.S. Constitution,” Jones said. “We find ourselves in 2020 asking: What is the obligation of the state to fulfill the spirit of the Constitution that was intended to clear the way, make a way, open the pool — to women, to Black Americans, to put racism and sexism to the side in American politics?”

Earlier this summer, Shannon Rozner, Chautauqua Institution chief of staff and vice president of strategic initiatives, described the 2020 season as an informal voting guide for the upcoming election. Each week pertains to issues that many Americans are concerned with: climate change, ethics of technology, and public education to name a few.

Jones said that the history of Black women and the fight for suffrage is a cautionary tale that parallels many current issues in the United States, including voter suppression.

“We know that voter suppression disproportionately affects communities of color, working people, and women,” she said. “The urgency of that is not new, but it is profoundly urgent and I hope that some talks and discussion and reflections in these weeks will help us press lawmakers, policymakers, local officials, to ensure that every American who is entitled to vote, has the opportunity to cast their ballot in November.”

The presentation will also touch on a Chautauquan connection that Jones found in her research. Many of the women she studied were trained elocutionists who used their education for public speaking, including the daughter Chautauquas that spread across the country in the late 19th and early 20th century. Jones focuses in particular on Hallie Quinn Brown, a student turned speaker who went on to become an educator, organizer, and suffragist that headed the largest Black women’s political organization in the country: the National Association of Colored Women. 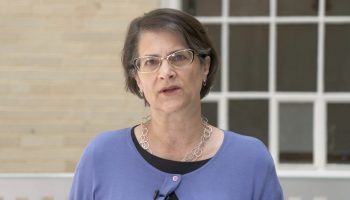