As the RMS Titanic sank in the North Atlantic Ocean, the ship’s eight musicians played on.

They played for as long as they could, with the intention of trying to calm the passengers around them, even as the water lapped at their feet. And although the COVID-19 pandemic may be a different kind of disaster, Alexander Kobrin is still prescribing music as a distraction.

Kobrin, a Russian pianist and associate professor of piano at the Eastman School of Music in Rochester, will give a recital at 4 p.m. EDT Wednesday, July 29, on the CHQ Assembly Virtual Porch. Kobrin will perform all nine movements of Sergei Rachmaninov’s 1917 “Études-Tableaux,” Op. 39. The performance will last 40 minutes, “a half-recital of sorts,” he said.

(Rachmaninov) didn’t want to officially leave his home country until the very last moment possible,” Kobrin said. “This opus reflects all of those emotional struggles, despairs and unknowns he was feeling. It’s about leaving something you love so much without knowing what’s in front of you.”

Rachmaninov was a Russian composer, the last great figure of the tradition of Russian Romanticism, especially known for his virtuosic piano concerti. His nine “Études-Tableaux,” Op. 39 for piano solo are his second set of piano etudes and the last important works written by Rachmaninov before his exile from Russia in 1917, a very “difficult and sensitive time” in Rachmaninov’s life, according to Kobrin.

“(Rachmaninov) didn’t want to officially leave his home country until the very last moment possible,” Kobrin said. “This opus reflects all of those emotional struggles, despairs and unknowns he was feeling. It’s about leaving something you love so much without knowing what’s in front of you.”

Rachmaninov often wrote under the external influence of “extra-musical sources,” but he rarely revealed them, Kobrin said, so this particular opus presents a unique opportunity to play from a “moment of emotion.”

Given the backstory, Kobrin said the music is “more intense than most,” but so is “the time we are living in right now.”

“I think we are living in a similar, but hopefully less turbulent time than 1917,” he said. “Still, this music really corresponds over (the century) between then and now. The audience will hear and recognize moments of unrest, worries and anxiety that this music produces.”

Persistently chromatic, Kobrin said, Rachmaninov’s harmonic formations are sophisticated with a varied use of altered chords and bold digressions within a given key. Each movement has its own story and style; irregular barring and chant-like melodies pervade the pieces. According to Kobrin, the opus fully explores both the pianist’s and the instrument’s capabilities and he isn’t afraid to admit the technicalities give him a “run for (his) money.”

“They are extremely difficult and I am incredibly nervous,” Kobrin said. “I have played it many times … and yet, the feeling is the same as the very first.”

“I have never done anything like this before,” he said. “You bow to the camera in your home alone and it’s just bizarre. I am worried audiences will want this online format to be the future, but I don’t think we can or should live with it this way. Music deserves a return to the stage as soon as possible.”

In the meantime, Kobrin hopes the “music that’s left” will provide a sense of relief to its listeners.

“Music should always serve as a distraction from the imperfections and inconveniences life brings our way,” Kobrin said. “I don’t know much about what we are going through, but I do know that.” 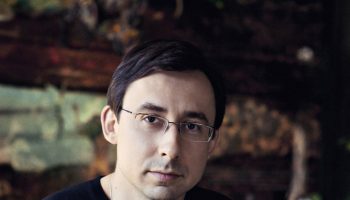