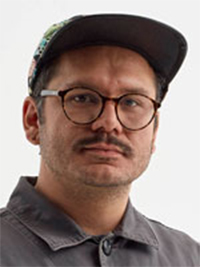 Salvador Jiménez-Flores can’t discuss his present without starting in the past.

His history, from his great-grandfather to his father to himself, has been characterized by the complex economic relationship between Mexico and the United States.

“Recently, when I was doing research, I found out that my great-grandfather was part of the Traqueros in the Midwest,” Jiménez-Flores said. “He helped build the railroads.”

From the 1870s to around the 1930s, Traqueros traveled from Mexico to the United States to build the U.S. railroad system, often taking over for Chinese workers as Chinese immigration restrictions increased.

“(My aunt) shared with me a picture of him when he was doing that work. … That was the first time he (wore) closed-toed shoes, because he had to wear boots,” he said. “He was always wearing huaraches — Mexican sandals — and he was very proud of having his closed-toed shoes.”

Jiménez-Flores will be speaking as part of the Chautauqua Visuals Arts Visiting Artists Lecture Series at 6:30 p.m. EDT Tuesday, July 7, on the Virtual Porch.

The Chicago-based artist and educator uses his work to explore questions of identity, particularly the “double consciousness” he experiences as someone whose life has been divided between Mexico and the United States.

Jiménez-Flores was born in Mexico and grew on his family’s farm in the state of Jalisco.

His father came to the United States in the 1960s as part of the Bracero migrant workers program. He stayed in America for about 20 years, even becoming a U.S. citizen, before getting laid off and moving back to Mexico shortly before Jiménez-Flores’ birth.

“Working with my dad in the fields in the summer — that was my childhood,” Jiménez-Flores said. “To have the opportunity to have my childhood there in Mexico, looking back, that was wonderful.”

In the ‘90s, the Jiménez-Flores farm was one of many Mexican farms negatively affected by the North American Free Trade Agreement. The family left Mexico and moved to Chicago in 2000, when Jiménez-Flores was 15.

“Being a teenager is a weird age,” Jiménez-Flores said. “There was a lot going on, I didn’t know English or understand the culture fully or understand the school system, so going to high school was really traumatic.”

Yollocalli Arts Reach, an after-school art program through the National Museum of Mexican Art, was his saving grace.

“That’s when I realized the power of images, and how you can also convey stories and tell stories with photographs,” he said. “That really pushed me to start drawing and painting and taking more art classes where I could.”

After high school, Jiménez-Flores returned to the program as a teaching artist. It was here that he discovered his love of teaching and creating community-focused art.

“It was a nice way to really circle back, give back to the community but also keep sharing my knowledge with others,” he said. “I never really thought that I would be in that position.”

While attending grad school at Ferris State University’s Kendall College of Art and Design in Grand Rapids, Michigan, he came to know the full extent of the lack of diversity in arts academia.

This situation transformed his interest in teaching into a commitment, to himself and to others like him.

“It was frustrating, because I was not seeing myself represented in the education I was getting,” he said. “That’s why I wanted to get an (MFA): to become that Latino professor that I never saw, and always wanted to have.”

Jiménez-Flores currently works as an assistant professor in ceramics at the School of Art Institute in Chicago.

As an artist, his work often strays into the surreal and futuristic realm. This was inspired in part by the way he felt following the 2016 election. In the face of such an unexpected outcome, and in response to his fears in the years that followed, Jiménez-Flores created a kind of refuge by imagining a world all his own.

“I am trying to imagine and create a future where the good guys look like me,” he wrote in his current artist statement, “with the hope that others will be able to see themselves in this future as well.”

He has been heartened by Black Lives Matter and other growing movements that are addressing the current and past injustices acted against the Black, Indigenous and POC communities in the United States.

“This never left; this dark side of America, this racist America has always been here,” he said. “It was founded on those principles.”

Jiménez-Flores’ work not only seeks to raise awareness of these injustices — it’s also a way for him to personally make sense of the country that has been so thoroughly  intertwined with his past, present and future.“(As artists), we’re just trying to process all this shit that’s happening in our world,” he said. “Unfortunately, we have a lot of material to pull from.”